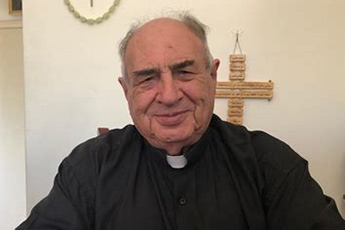 On this day in 2007, Fr Manuel Musallam, the Catholic priest of the Gaza Diocese spoke irritatedly to an obtuse BBC reporter: “Hamas this, Hamas that. You think we Christians are shaking in our ghettos in Gaza? Of course, I am a Christian believer, but politically I am a Palestinian Muslim. I resist Israel's military occupation…This is our home.” Musallam’s parents accompanied him to Gaza. When they passed away in Gaza, the Israeli authorities denied him a permit to accompany them when they were buried in Bir Zeit.

The journalist reprimanded by Fr. Musallam was the BBC's Katya Adler, currently BBC Europe Editor.
She conceded that Gaza in 2007, the year before Israel unleashed the Cast Lead massacre, was "home to a thriving Christian community". Adler reported that she had come to Fr. Musallam's "office to ask how Christians in Gaza were faring on this, their first Christmas under the full internal control of Hamas".

"You media people!" Father Musallam boomed at me when I first poked my head around his door.
"Hamas this, Hamas that. You think we Christians are shaking in our ghettos in Gaza? That we're going to beg you British or the Americans or the Vatican to rescue us?" Rescue us from what? From where? This is our home."

Ninety-nine percent of the Catholic school pupils are Muslim. Fr Musallam says he does not fear the Islamists. "They should be afraid. Not me. Their children are under my tutelage, in my school. Hamas mothers and fathers are here at parents' day along with everyone else."

But there is more that binds Christians and Muslims in Gaza than their children's shared playground. On one of the walls hang huge photos of the Pope, the Patriarch of Jerusalem, and the Palestinian president.

I found a group of 10-year-olds on stage, rehearsing their Nativity play, watched, with great enthusiasm, by a group of their Muslim friends. Mary and Joseph squatted on stage. The girl playing Mary, clasped a tube of scrunched-up brown paper wrapped in a scarf, which, for rehearsal purposes, was posing as baby Jesus.

"You see, our identity is a multi-layered one. Of course, I am a Christian believer, but politically I am a Palestinian Muslim. I resist Israel's military occupation, obviously not with weapons. The Jihad can never be mine but with my words, my sermons, I am a Palestinian priest. We have lived alongside Muslims here since Islam was born. They have a special word for us, the Christians of Palestine. They call us Nasserine - the people of Nazareth. They recognise that we have always been here. Even the more extreme Muslims see a difference between us and other Christians they regard as enemies and call Crusaders."

Like their Muslim neighbours, Christians in the West Bank and the Gaza Strip are denied basic religious freedoms. They are routinely prohibited from traveling very short distances to worship in one of the most holy sites in Christianity — the Church of the Holy Sepulcher in the Old City of Jerusalem. Bethlehem at Christmas - every week of the year - is a prison, surrounded by a 25-foot high wall and patrolled by heavily armed soldiers. Entry to Bethlehem is through a massive steel and concrete checkpoint designed to humiliate and intimidate Palestinians trying to live and work.
A latter-day Mary and Joseph would probably be unable to travel from Nazareth to Bethlehem; checkpoints, roads for Jews only, and armed settlers are just some of Israel’s creative range of obstacles to Palestinian travel.

Israel's recent “Nation State Law” reserves important democratic rights to Jews, denying them to Palestinian Muslims and Christians, whether they are Israeli citizens or under military occupation in the West Bank and Gaza. This law makes explicit what has always been the case - that Israel is based on apartheid structures of violent dispossession and subjugation of the Palestine indigenous people.

Every Christian denomination in Palestine collectively issued the Kairos Palestine appeal which calls on their co-religionists and others worldwide to support the BDS movement to boycott and isolate the State of Israel until it concedes Palestinian rights.