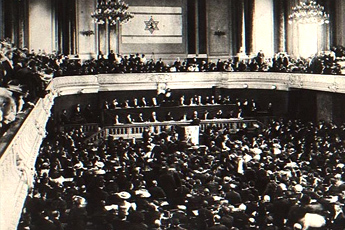 On this day in 1901, the Fifth Zionist Congress opened in Basle, Switzerland, where the First had been forced to relocate four years earlier due to opposition from the Jewish community of Munich. The Fifth Congress set up the Jewish National Fund (JNF-KKL) to obtain land in Palestine for exclusively Jewish benefit. This involved the expulsion of any Palestinians living on that land, however long their residence there. Today, the JNF largely operates the Apartheid system of residential segregation in Israel.

After heated discussions at the first four Zionist congresses, the JNF was established at the Fifth Zionist Congress held in Basel in 1901, and incorporated in England in 1907. Its Memorandum of Association defines the primary objective of the JNF as "to purchase, take on lease or in exchange or otherwise acquire any lands, forests, rights of possession and other rights in the prescribed region [Palestine and surrounding areas] ... for the purpose of settling Jews on such lands". The JNF was expressly prohibited from selling any land to ensure that it would hold on to these lands in the name of the Jewish people in perpetuity (Lehn p. 31-32).

The JNF systematically kept files on each Palestinian locality that included the names of Palestinians involved in resisting the British and Zionist colonization. These "village files" were later used as a central source of military intelligence for the 1948 ethnic cleansing of Palestine. Many of the activists named in the JNF's files were executed by Zionist forces (see Ilan Pappe, The Ethnic Cleansing of Palestine, Oxford: One World Press, 2006, pp.17-22).

The Village Files took many years to construct, were nearly complete by the 1930’s, and were of great strategic importance to the Jewish militias during the Nakba. Not only did they offer invaluable information which informed the attacks on villages, for instance identifying routes in and out, in addition to recording the names of Palestinians in the national movement targetted for execution during the process of ethnic cleansing.

Special reconnaisance units, often pretending to be hiking groups, entered Palestinian villages, exploiting the Palestinian tradition of hospitality to glean information that would be collated for possible use in besieging, attacking, dispossessing or liquidating their hosts at some time in the future.

According to historian Ilan Pappé, after successful attacks on Palestinian villages during 1948, the people on the list were often killed as soon as they were identified. (Ethnic Cleansing of Palestine, pp 17-22).

Yigael Yadin (1917-1984) who later became Israel's second Chief of Staff, admitted once that it was the detailed information gathered on these villages (i.e., the Village Files) which enabled the Zionist undeground forces in November 1947 to sweep through the Palestinian landscape with such speed and efficiency and with little resistance from the 'Arab side'. In fact, it was not 'Arab resistance' that they feared. It was the British forces. Had it not been for the British presence, Yadin declared, the Palestinian resistance to the Partition Plan would have been quelled in one month.
[Ilan Pappé: The Ethnic Cleansing of Palestine]

When UK Prime Minister David Cameron resigned as a Patron of the JNF in May 2011 it marked the first time in 10 years the current Prime Minister was not a JNF Patron. Ed Miliband for Labour and LibDem leader Nick Clegg declimned the JNF's invitation to become Patrons. Tony Blair and Gordon Brown remain patrons of the racist UK charity.