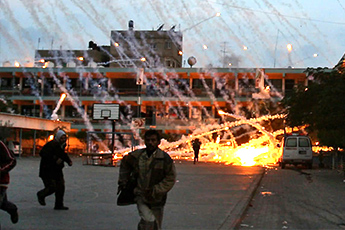 On this day in 2008, US-supplied Israeli war planes opened up a pre-election massacre of 1,400 Palestinians. Israel barred media while UN shelters, schools, hospitals and food warehouses were shelled in Gaza and white phosphorous repeatedly fired onto crowded areas. Since then, one of the world’s most high-tech militaries has incessantly attacked an exhausted people, prevented reconstruction of the devastated areas, and received increasing amounts of arms from the US (aid) and UK (sales).

Palestinian militants often used empty houses, but in so far as Amnesty International could establish did not forcibly take over inhabited houses; Israeli soldiers likewise used empty houses, as well as houses whose inhabitants were present and were being held against their will.

Nevertheless, these accusations were widely reported by the BBC, and despite the investigations of veteran BBC journalist, Jeremy Bowen.

Sitting in Gaza today it is hard to believe that five years have passed...For 22 days we were closed in and relentlessly attacked, while the world watched as war crimes were broadcast live on television. At the end of the offensive over 1,400 Palestinians were dead; 82 percent of them – the overwhelming majority – were innocent civilians. In January 2009, Gaza looked like the scene of a natural disaster. Its people stood numb and in shock. But in the middle of the destruction and the loss, there was hope. We believed that the world had to react.

The UK Government did react - when Israel unleashed an even more murderous masssacre of Palestinians less than six months later, slaughtering over 2,200 people, Britain defended Israel and stepped up arms sales to the army accused of war crimes and crimes against humanity.

The UK Guardian has to insert terms like 'alleged' and 'claim'.
Guardian investigation uncovers evidence of alleged Israeli war crimes in Gaza
Palestinians claim children were used as human shields and hospitals targeted during 23-day conflict

The Western media, furnished with Israeli PR press packs explaining the rationale for the carnage, filed their reports from outside the strip, but two Al Jazeera TV journalists, Ayman Mohyeldin and Shareen Tadros, were in Gaza throughout the assault. Al Jazeera's 4-part documentary, "Reflections of War", combines their own recollections and some of their unparalleled eye-witness reporting of a civilian population living through the hell of three weeks of collective punishment in the shape of an unrelenting frenzy of state terrorism.