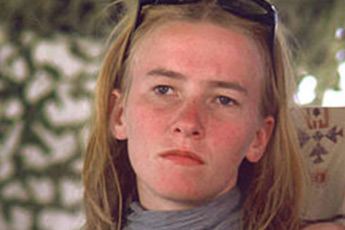 KILLING OF RACHEL CORRIE DEFENDING A PALESTINIAN HOME
On this day in 2003, an Israel soldier driving a military bulldozer ran over Rachel Corrie. She was part of a group of three activists with the International Solidarity Movement trying to prevent the Israeli army demolishing Palestinian homes as collective punishment. The Army said the death was an accident but eye witnesses on the scene ruled this out and insisted the killing was deliberate. Amnesty and Human Rights Watch criticised an Israeli court ruling in support of the military version of the killing of Rachel Corrie.

Israeli court clears Army of any wrongdoing in killing of Rachel Corrie
Israel’s high court has rejected an appeal made by the family of Rachel Corrie, the young American activist crushed to death by the Israeli military while she was protesting against a home demolition in the Gaza Strip.

The Corrie family brought a civil suit against the Israeli army in 2005 after a military prosecutor closed the case with no charges. Rachel’s parents, Cindy and Craig, have been seeking to hold Israel liable for her death. The Corries have alleged that Israel’s defense ministry had either killed her deliberately or was guilty of negligence.

Rachel, who was 23 when she was killed in March 2003, had traveled to Gaza from her home in Olympia, Washington to work with the International Solidarity Movement. She had been in Gaza for two months before she she was run over by a soldier driving a bulldozer. She was killed in Rafah, near Gaza’s border with Egypt.

In August 2012, a lower court in Haifa had ruled in favor of the military; the State of Israel had argued that it was not responsible for damages in “closed military zones.”

In 2010, an Israeli military leader told the Haifa court that “During war there are no civilians.” As part of a policy that is still in effect, the Israeli military and police do not investigate complaints of attacks against civilians in “closed military zones.”

100,000 Palestinian homes have been demolished in Israel and the Occupied Palestine Territory since 1948

A Short History of Collective Punishment: From the British Empire to Gaza by Stanley L. Cohen

1-minute video of young Rachel Corrie's speech at her primary school. A prodigy