ZIONISTS BOMB JEWISH CENTRES IN IRAQ
On this day in 1950 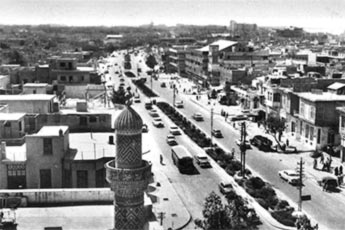 , a bomb went off at the American Cultural Center in Baghdad, a popular meeting place for young Jews. A month later a grenade from a passing car injured four Jews celebrating Passover at a cafe. That night leaflets called on Jews to leave Iraq immediately. A member of the Zionist underground in Iraq, Naeim Giladi, attributed the bombings to Zionists, a belief shared by an ex-CIA officer whom Giladi quotes in his book, Ben-Gurion's Scandals: How the Haganah and the Mossad Eliminated Jews.

Naeim Giladi, an Iraqi Jew, worked for the Zionist underground in Iraq:

"I write this article for the same reason I wrote my book: to tell the American people, and especially American Jews, that Jews from Islamic lands did not emigrate willingly to Israel; that, to force them to leave, Jews killed Jews; and that, to buy time to confiscate ever more Arab lands, Jews on numerous occasions rejected genuine peace initiatives from their Arab neighbors. I write about what the first prime minister of Israel called "cruel Zionism." I write about it because I was part of it."

When Scottish Government Minister Humza Yousaf spoke to a May 2014 meeting in Glasgow, the Jewish Telegraph reported that Zionists in the audience disingenuously 'informed' the Minister of External Affairs that "Israel's War of Independence had created around 850,000 Jewish refugees from Arab countries" and that "Mr Yousaf...admitted that he had been unaware that there were so many Jewish refugees in 1948".

The truth is rather different from that which Minister Yousaf seems to have accepted. Britain had installed a puppet monarchy after WWI after a brutal invasion of Iraq using aerial bombing with chemical weapons.  The UK and US pressured this regime to pressure the Jews of Iraq to leave:

"there was no forced mass exodus of Jews from Arab countries, in the way that there was a deliberate, forced expulsion of Palestinians from their own land. If we look at Iraq, for example, Arab Jews left due to a combination of factors, of which a hostile environment following the creation of the State of Israel in Palestine was certainly one. Other push factors, according to Abbas Shiblak, author of The Lure of Zion: Case of the Iraqi Jews, include laws that were enacted to facilitate the Jewish exodus. One such law is 1/1950, known as the denaturalisation law, which empowered the Iraqi government to “divest any Iraqi who wished of his own free will and choice to leave Iraq for good, of his Iraqi nationality.” Shiblak points out that this law was welcomed by Israel, as well as Britain and the US, both of which were applying pressure on Iraq to agree to a population transfer deal involving 100,000 Iraqi Jews. It was indeed a driving factor in the flight of Iraqi Jews."

Marion Woolfson in her book Prophets in Babylon: Jews in the Arab World showed how the Jews of Arab coiuntries were both lured to Israel and pressured to leave by corrupt pro-Western regimes. She published a document from the British Embassy in Washington that reports the secret deliberations of the governing body of the American-Jewish Committee in December 1942:

"A large post-war immigration of Central European Jews in to Palestine is unanimously urged...since it offers an alternative to...Jewish immigration in to the USA which is viewed by most US Jews with apprehension."