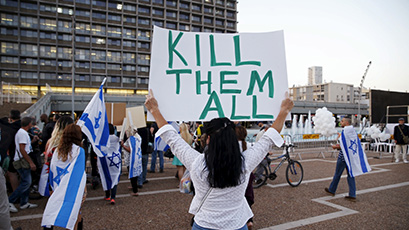 As we approach the end of 2020, a look back at an earlier year - 1949 -  a year in which at least 1,000 Palestinian “infiltrators” were killed by the Israeli military. A “free fire” policy allowed soldiers to kill returning refugees on sight although Israel’s admission to the UN had been conditional on refugees being allowed to return and live in Palestine in peace. While Palestinian refugees trying to return to their lands were being killed on sight, anyone from anywhere in the world claiming one Jewish grandparent could enter by right and set up home.

The available documentation suggests that Israeli security forces and civilian guards, and their mines and booby-traps, killed somewhere between 2,700 and 5,000 Arab "infiltrators" during 1949-56. The evidence suggests that the vast majority of those killed were unarmed. The overwhelming majority had infiltrated for economic or social reasons. The majority of the infiltrators killed died during 1949-51; there was a drop to some 300-500 a year in 1952-4.
Morris (1997). Israel's Border Wars, 1949-1956: Arab Infiltration, Israeli Retaliation, and the Countdown to the Suez War. p. 432.

I wish to ask the representative of Israel whether he is authorized by his Government to assure the Committee that the State of Israel will do everything in its power to co-operate with the United Nations in order to put into effect (a) the General Assembly resolution of 29 November 1947 on the internationalization of the City of Jerusalem and the surrounding area [resolution 181] and (b) the General Assembly resolution of 11 December 1948 on the repatriation of the refugees [resolution 194].

I can give unqualified affirmative answer to the second question as to whether we will co-operate with the organs of the United Nations with all the means at our disposal in the fulfillment of the resolution concerning refugees.

The United Kingdom was among those countries that voted in favour of Resolution 194 on the Palestinian refugees right to return.

While Eban was makiing promises at the UN, the Israeli military had a “free fire” policy, allowing soldiers to shoot returning refugees on sight. According to Israeli historian, Avi Shlaim:

A 'free fire' policy towards infiltrators was adopted. Periodic search operations were also mounted in Arab villages inside Israel to weed out infiltrators. From time to time the soldiers who carried out these operations committed atrocities, among them gang rape, murder and, on one occasion, the dumping of 120 suspected infiltrators in the Arava desert without water. The atrocities were committed not in the heat of battle but for the most part against innocent civilians, including women and children.
Avi Shlaim, The Iron Wall: Israel and the Arab World, p.83

Three Palestinian children shot, two fatally by IDF troops near Deir Ayyub in the Latrun salient. According to subsequent Arab Legion reports, whose main points were confirmed by UN observers, Ali Muhammad Ali Alyyan (12) his sister Fakhriyeh Muhammad Ali Alyyan (10) and their cousin Khadijeh Abd al Fattah Muhammad Ali (8) all from Yalu village, had gone to gather fire wood near the demarcation line, some 400 yd (370 m) inside the Jordanian territory. An Israeli patrol came upon them and Khadijeh began to run back to her village. The IDF patrol opened fire and wounded her superficially on the thigh. As the children’s father and uncle rushed to the scene they saw the patrol dragging the brother and sister away to a spot south of Deir Ayyub, in no mans land. The men looked on helplessly from a near by hill. “The two children were stood in a wadi bed and the soldiers opened fire at them...", killing both children.
Morris, Israel's Border Wars, 1949-1956; Arab Infiltration, Israeli Retaliation and the Countdown to the Suez War, p.181