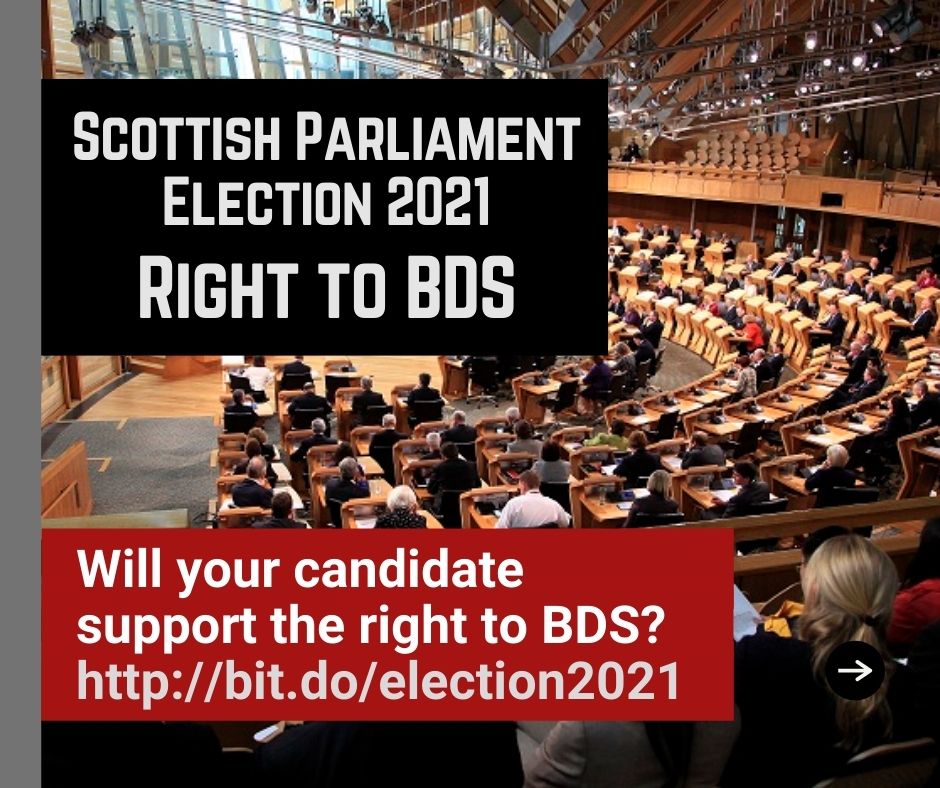 Scottish PSC has written to candidates in the 2021 Holyrood elections asking them to assert the ‘Right to BDS’, in other words, the right of public institutions, organisations and individuals to support the campaign of  Boycott Divestment and Sanctions (BDS).

In a democratic society, citizens and civil society have the right to support human rights through endorsing, campaigning for or implementing BDS. Whether or not candidates support BDS, we are asking them to support the right to BDS of those of us who do.

Our question: Do you support the right to BDS? YES /  NO

Why is the right to BDS under threat?

Israel and those who defend its human rights abuses are seeking to undermine the BDS campaign, which only demonstrates that it is an effective means for citizens to protect human rights and international law. Israel is supporting initiatives around the world to try to make BDS illegal or unacceptable. In Britain, the UK government elected in 2019 declared that it intended to ban public bodies from supporting BDS. While the UK government has no power to ban BDS in Scotland, it is important and necessary for us to protect the right of public institutions, organisations and individuals to support or to implement the BDS campaign.

Who else supports the right to BDS?

Despite legal and political challenges by Israel and its supporters, the right to BDS has been defended by a significant range of legal, political and academic bodies, including Jewish scholars:

Thus, in the face of a concerted campaign to prevent supporters of Palestinian human rights campaigning for BDS, many institutions who do not advocate such a campaign, have nonetheless explicitly supported the right to BDS.