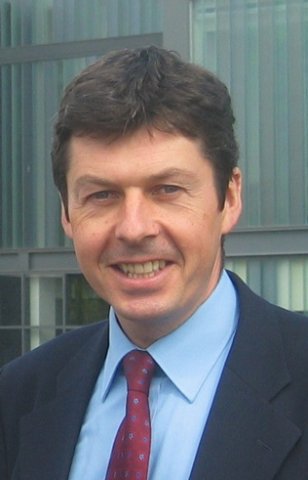 Below is the letter Scottish PSC sent to Ken McIntosh, Labour MSP for E Renfrewshire, who is currently a candidate for the leadership of the Scottish Labour Party (rather like the man who rushed and elbowed some others aside to get the last ticket on the Titanic).

McIntosh was the lone MSP who put on an exhibition inside the Scottish Parliament on "Israeli Science" at the behest of the Israeli Embassy. Here he cynically interprets a leaflet in support of Palestinian rights as "targetting Jewish people" and ignores constituents who challenge his dishonesty.

The Jewish Telegraph of 30/4/10 quoted you as saying about an SPSC leaflet "This kind of material is both offensive and entirely misplaced. It says everything about the views and the ignorance of these protesters that they are prepared to target Jewish people living here in Scotland because of their own blinkered hostility to Israel."

On being asked to justify these remarks you knowingly lied to your constituents when you claimed that you had seen an anti-Semitic leaflet calling for a boycott of kosher food in the Giffnock branch of Morrisons.

This claim is utterly without foundation and deliberately fabricated by you to defame those who support the Palestinian appeal for boycott, divestment and sanctions against the State of Israel to defend Palestinian human rights by calling for an end to Israel’s war crimes and crimes against humanity.

The manager of the store in question said that the material you alleged to be ‘anti-Semitic’ was in fact a Scottish Palestine Solidarity Campaign sticker which said ‘Free Palestine. Boycott Israel’. According to a senior police officer (21.01.11), “Police enquiries established that no offence had been committed”.

Having knowingly fabricated such a serious allegation for sordid political gain, indeed alleged a criminal act by the Scottish Palestine Solidarity Campaign, you then declined to take the matter further when challenged to do so by a constituent.

You have been a notorious peddler of untruths and a disgrace to your constituency for some time, but the deliberate and conscious nature of your lies in manufacturing ‘anti-Semitic’ incidents is despicable. You have defamed those who campaign for Palestinian rights as universal human rights, duplicitously alarming both Jewish citizens and the wider community in the process, for your own political ends.

I hope that any benefit you may have gained from this deception will be short lived and your electorate give you the recognition due to one of such well-deserved notoriety, in the coming election.