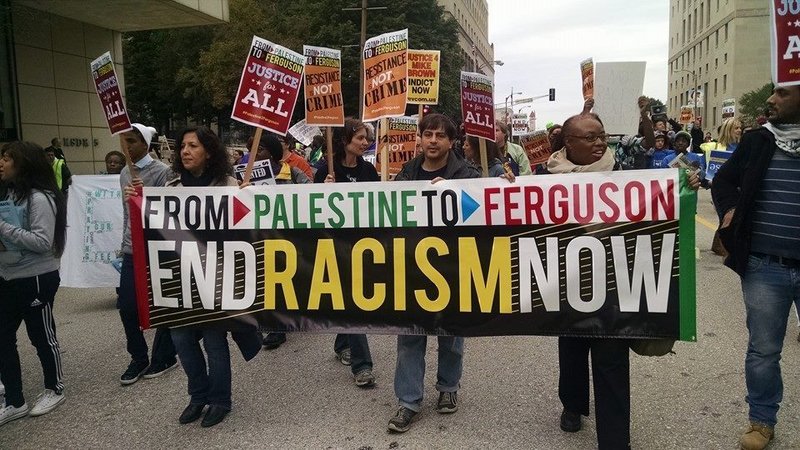 "Palestinians have situated their struggle, the BDS movement, as part of a wider struggle against racism. Week after week Israel’s crimes escalate, fuelled by racism and genocidal discourse so malevolent that even Israeli generals, prominent journalists and Holocaust survivors have spoken out about how Israeli society develop ever more marked features resembling 1930s European fascism and Nazism."

As an anti-racist organisation, SPSC has participated over the years in Stand Up to Racism demonstrations; last year we provided a high-profile speaker, Prof Richard Falk, who co-authored the UN ESCWA report ‘Israeli Practices towards the Palestinian People and the Question of Apartheid’ which concluded “that Israel has established an apartheid regime that dominates the Palestinian people as a whole”. A year later, the active agents of that apartheid state, defenders of its crimes against humanity are to be allowed onto the march.

We understand that racism is a mortal danger to any project for a better future in Britain, threatens to hurl us backwards into the abyss and that ALL racist organisations need to be challenged and quarantined like political and social Ebola.

According to SUTR publicity, March 17th marks the anniversary of the Sharpeville massacre of 1960 and is part of worldwide demonstrations called to combat all racism, including state-enforced racism.

How did this come to pass that an organisation that represents and works on behalf of apartheid Israel can be welcome to participate in such an occasion, in a city proud of the internationalism and solidarity that led to the naming of Mandela Place?

It is with great regret, that we have concluded that we cannot participate in Saturday’s march since SUTR in Scotland and UK-wide has let it be known that the racist Confederation of Friends of Israel Scotland (COFIS), will be allowed to present itself as an anti-racist group on the march with a banner and Israeli flags.

COFIS is a group that considers extreme racist Tommy Robinson to be “a colourful character”, refers to Palestinians as 'Pallys' and 'Fakestinians' and posts about Palestinians being “euthanised”. COFIS is led by a Christian fundamentalist and is closely allied with Christians United for Israel. CUFI leader, Rev. John Hagee, asserts that Hitler was chosen by God to carry out the Nazi Holocaust to drive Jews to the only place they should live, Palestine.

Ask why the extreme right across Europe and beyond fly Israeli flags and they will provide the answer; US White supremacist Richard Spencer calls himself a ‘White Zionist’ because Israel is already their model for a state built on racist principles, ethnic cleansing and permanent inferiority for the indigenous people.

Palestinians have situated their struggle, the BDS movement, as part of a wider struggle against racism. Week after week Israel’s crimes escalate, fuelled by racism and genocidal discourse so malevolent that even Israeli generals, prominent journalists and Holocaust survivors have spoken out about how Israeli society develop ever more marked features resembling 1930s European fascism and Nazism.

Corbyn will find that COFIS and their ilk are insatiable and will continue to come for him, for the left, and certainly for all of us concerned with ensuring a future in Palestine / Israel that is apartheid-free and based on equality, justice and freedom.

During the long agony of the Palestinian people, most of the British left openly sided with the colonisers. Groaning in a vast gulag, periodically massacred, denied minimum human rights, an entire people were violated over decades, while the Churchills and Thatchers cheered on and armed the colonisers.

But we also must acknowledge that the British Labour Party in 1944/45, in the most progressive Labour Government ever, asked the Palestinian people as a whole to move out of Palestine to make way for Jewish colonists. Only recently has the British trade union movement and most of the left begun to atone for this shameful past.

The movers of the motion to ‘unwelcome’ COFIS were informed that the decision to accept defenders of Israeli war crimes and apartheid on to the march “came from SUTR National Officers, from Diane Abbott all the way down”. The repeated reason given by SUTR for allowing COFIS onto the march was the fear of being attacked in the media as “antisemitic” if they told these uber-racists they were unwelcome.

This is a capitulation to racism in a double sense. Scottish SUTR officers agree that COFIS is a campaigning racist organisation. (“We fully agree with you about what COFIS is”). But as the letter from Scottish Jewish anti-racists makes clear, to treat COFIS as a Jewish community organisation is itself a racist position because it asserts that all Jews are in some way associated with the Apartheid State. When clear anti-racist politics are needed, when its ‘fight or flight time’, SUTR has chosen capitulation to a racist smear against Scottish Jews and has thrown the Palestinians under the bus.

We have seen that there is far to go and we have been thrown back by this rotten decision. We are even hesitant about communicating this betrayal to our friends in Palestine for we know the pain it will cause to people who gambled on our support and have been rejected by some in Scotland.

There is the danger of the retreat in the face of weaponised false antisemitism charges turning into a rout.

We pick ourselves up from defeats just as we have celebrated victories and we dedicate ourselves to a long struggle, seeking the new allies that will inevitably come to the aid of the Palestinian anti-colonial struggle.

Palestinians are being occupied, murdered and dispossessed, many living in cruelly besieged Gaza under a military that uses guidance systems made in Fife to get bombs to their targets on Palestinian universities, schools, hospitals and homes. The same flag that flies over their constant humiliation in Palestine will now fly over the demonstration in Glasgow.

We have never been in such a situation before where a hard racist organisation has learned that they will be welcome on an ANTI-racist demonstration. This is salt in open Palestinian wounds and sends a message – the message COFIS and the Israeli Embassy work tirelessly to send – that resistance is futile because Palestinians under Israel’s iron heel are completely isolated. “Just look – even Scottish anti-racists are with Israel!”

What better way to spread pain and despair, for Israel’s benefit. Those progressive Palestinians and citizens across the Middle East who argue that international solidarity can contribute to their liberation and a better world have been kicked in the teeth and those elements who thrive on despair - ISIS and Al Qaeda - can put another slide in their PowerPoint.

Those Palestinians, our comrades in the fight against the Apartheid they suffer under, have reached out to join with anti-racists around the world and have been told that the flag of their torturers is welcome in Glasgow.

But everything is now out in the open for all to see. New lines must be drawn with those who oppose all racism on one side of that line, and on the other extreme racists and their partners, racist and "anti-racist" alike.