The entire written and audio-visual content of the SPSC website and Facebook pages over seventeen years, together with scores of hours of TV discussions by SPSC representatives reveals not a scintilla of antisemitic material, suggestions or ‘dog whistles’. The material contains many direct and vigorous rebuttals of antisemitic theories raised by others to explain the power of Israel and its relationship to the US today.
SPSC has organized speaker tours over several years by Holocaust survivors to recount their experiences and draw conclusions in favour of universal human rights – Hedy Epstein and Auschwitz survivor Hajo Meyer were both smeared by UK Zionists who mobilized a Tory Minister to attack Hajo Meyer’s talks on the theme of ‘Never Again for Anyone’ as inappropriate and distasteful.
Mick Napier
9th August 2017

Israel depends massively on the economic, military and diplomatic support of its Western allies. Because public opinion in these countries is extremely hostile to Israel’s crimes, the work of ethnically cleansing Palestinians to sustain and expand a Jewish supremacist state in all of Palestine needs to be supplemented by a campaign to isolate and silence critics of Israel and Zionism.

Palestinians in Gaza, the majority of whom are refugees from earlier waves of Zionist ethnic cleansing, are being walled in, bombed and shot at, deprived of the necessities of life - clean water, security, electricity, personal privacy; it adds up to incremental genocide. Palestinians in the other illegally occupied territories are subjected to mass incarceration, dispossession, a racist programme of home demolitions and the building of exclusively Jewish settlements, military night raids, settlers and soldiers who can kill a Palestinian with virtual impunity. All Palestinians live under the shadow of Israeli state terrorism.

At the same time, pro-Israel elements work to divert attention away from Israel and Palestine to smear those who stand up for Palestinian freedom and dignity. The brutal siege of Gaza and the attacks on Palestine solidarity around the world are both planned and executed by the Israeli Government, using domestic assets in each country.

This means that there is much a stake; Israel can kill Palestinians at will but it is vastly over-extended around the world and its campaign of intimidation, bullying and smearing of opponents in the USA, the UK and Scotland will break on the rocks of a hostile public opinion if we stand our ground against these enemies of free speech here and of Palestinian collective existence in Palestine.

2.  THE ATTACK
Alex Massie used the pages of Murdoch’s Sunday Times (30/07) to promote the work of a minor blogger who campaigns to close down spaces for discussion of Palestinian rights and the crimes of the State of Israel. In a piece reminiscent of the Hillsborough smears promoted by its stablemate The Sun, Massie deployed invective worthy of Goebbels’ Die Sturmer and compared Scottish Palestine Solidarity Campaign to ‘a sewer’. He peddled the blatant untruths and half-truths of the pro-Israel blogger’s attack on Palestine solidarity in a way that will have pleased his much feared proprietor.

Collier’s main supporters in Scotland have a record of sinister racist language. In a recent chilling post on the Facebook of their main cheerleader in Scotland, a member of Glasgow Friends of Israel wrote from Jerusalem of a violent clash resulting in the ‘murder of three Jews’ and the ‘euthanising of three rioters’. The idea of ‘euthanising’ Palestinians was ‘liked’ by over a score of Friends of Israel members and others.

Collier’s attack on SPSC as ‘antisemites’ and ‘Holocaust deniers’ is part of the Israeli Embassy’s widely publicised campaign against the BDS movement.. The end result is that nasty stuff by individuals most of us have never seen is listed by the Israeli Embassy front man as supposed proof that the ‘core membership’ o 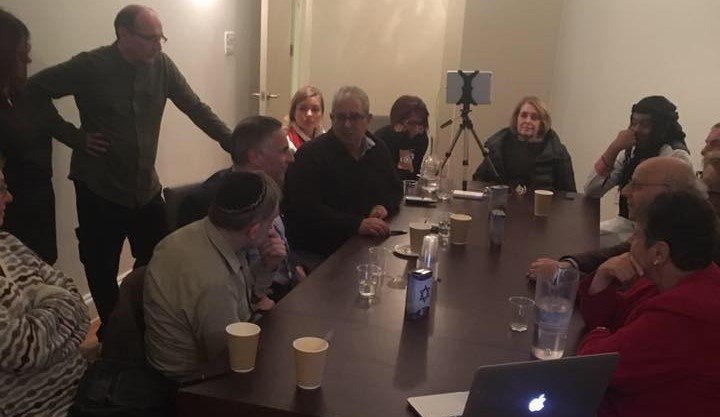 Collier doesn’t only work with a keyboard – he is part of a team that actively disrupts Palestinian support activities on campuses. In the photo Collier (right) is standing behind active disrupter Jonathan Hoffman and other well-known Zionist activists who plan disruption of Palestine meetings. All of them report back to the Israeli Embassy. Hoffman has been ejected from meetings in the Westminster Parliament, SOAS and elsewhere.

4. THE UNBLEMISHED RECORD OF SCOTTISH PALESTINE SOLIDARITY CAMPAIGN
It is a record we and many others are proud of:

5.  THE ALLEGATIONS ARE WITHOUT FOUNDATION
Since the entire corpus of SPSC’s work is uniformly anti-racist and has no truck with antisemitic theories, the Israeli Embassy’s man switches his focus to private individuals’ Facebook pages, many of whom have nothing whatever to do with SPSC.

His methodology is to identify individuals at open events organised by SPSC and then trawl through years of Fb and social media postings for evidence that the poster holds antisemitic views. He uncovers some nasty stuff but the analysis of the material would get a fail in an undergraduate essay.

Here are some examples, but we don’t have the resources of a foreign embassy behind us to finance a wade through all of Collier’s dishonesty:*

6.  MATERIAL THAT IS NOT ANTISEMITIC
Collier produces materials that are horribly antisemitic (but see above section 5). There are many examples, however, not surprising since our blogger considers many views to be antisemitic, that others consider to be democratic critiques of the self-identifying Zionist settler-colonial enterprise in Palestine. Much of the material denounced as antisemitic is no such thing.

Examples would include Fife pp50-53, and Elizabeth Saor Alba, p77. In ‘Fife’, some strange grainy pics are reproduced of ISIS members praying where the poster alleges some kind of CIA involvement, but no evidence of antisemitic content in posts by Bill Mair. Nasty antisemitic material is shown in posts by one individual, unconnected to SPSC in any way, who turned up briefly to a street stall in December 2015.

The posting on p17 suggesting Israel supports ISIS may be correct or incorrect but it is not antisemitic in any way. Collier, however, conflates this type of speculation with unambiguous antisemitic materials. There are, however, reliable reports of Israel currently supporting Syrian jihadis. Such speculation may also be fueled by reliable evidence of Israel’s ambitions to dominate the region. For example, the father of the Israeli State, Ben Gurion, wrote:

“Our aim is to smash Lebanon, Trans-Jordan, and Syria. The weak point is Lebanon, for the Moslem regime is artificial and easy for us to undermine. We shall establish a Christian state there, and then we will smash the Arab Legion, eliminate Trans-Jordan; Syria will fall to us. We then bomb and move on and take Port Said, Alexandria and Sinai.” May 1948, to the General Staff. Ben-Gurion, a Biography, by Michael Ben-Zohar, Delacorte, New York 1978.

Much else could be adduced in the same vein that can feed heated speculation on Israel’s involvement with jihadis. We could discuss how the USA financed and armed mujahideen groups in Afghanistan that then fought the US. The idea is not remotely ‘anti-American’ but a part of normal political discourse. Ditto discussion of possible relations between ISIS and Israel.

There are many other examples in the blogger’s piece that similarly cross over from real antisemitism to material that is in no way antisemitic.

SPSC has explicit policies and an unbroken record of publicly challenging and breaking links with antisemites who worked to infiltrate the Palestine solidarity movement.

SPSC will maintain the present situation where our core membership is clear about the oft-repeated stress by SPSC on the need for opposition to Zionism not to be besmirched by acceptance of antisemtitic ideas. SPSC is opposed to a system of ethnic supremacy, not a population. We consistently promote anti-racist ideas as a campaign - we don't have the resources to police the social media of all supporters.

We view with contempt, however, allegations by an avowed supporter of Israeli massacres and ethnic supremacy in Palestine, someone working for and with the Israeli embassy to weaken all Palestine solidarity efforts in the UK the better to isolate the Palestinian people in the face of Israel’s ongoing ethnic cleansing.

Collier’s aims to prove that no group can really be driven by a thirst for justice for the Palestinian people and opposition to British and Scottish complicity in their dispossession and subjugation. SPSC works to counter antisemitic views for at least three reasons:

8.  CONCLUSION
Zionists like Collier work incessantly to conflate antisemitism with hostility to the State of Israel. SPSC works to prevent that conflation. Israel’s claim that it murders in the name of all the Jews in the world is believed by naïve people, even some who sympathise with the plight of the Palestinian under Israel’s iron heel.

But even those who fall into the trap of seeing the criminal impunity of the Jewish supremacist State in the Middle East as part of a world-wide Jewish supremacy are rarely driven, as Collier alleges, by animus towards Jews for which Palestine is only a cynical cover.

Rather, almost all are moved by human compassion at the terrible suffering inflicted on the people of Gaza by Israel and its sponsors in Washington, London, the EU, supported by Israel’s Arab allies such as Egypt and Saudi Arabia.

Scottish Palestine Solidarity Campaign will continue to campaign for the Palestinian call for BDS. While almost every Scottish local authority pension fund invests in companies that supply Israel to periodically slaughter Palestinians (and the Saudi dictatorship to slaughter Yemenis) we will not be diverted from BDS work. We hope you will support that work.

Mick Napier
West Calder
9th August 2017
This email address is being protected from spambots. You need JavaScript enabled to view it.

*It is not only dishonest in the service of the Israeli Embassy, it is almost risibly incompetent; the blogger’s parallel piece of in-depth ‘research’ earlier this year into the London-based Palestine Solidarity Campaign was unable to get the name of the target correct. Since hastily corrected. In terms of methodology, Collier assumes that when people are tagged on a Facebook post as being ‘present’ with a Facebook post-er then they were actually present. On that basis I have been round the world three times in the last year.