The Scottish Palestine Solidarity Campaign strongly condemns the candidacy of Jim Murphy MP, former Chair and continuing member of Labour Friends of Israel, for the leadership of the Scottish Labour Party. Throughout his political career, Murphy has demonstrated blind support for the Israeli state, and blatant disregard for Palestinian lives and human rights. 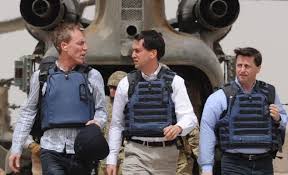 Examples of Murphy's contemptible views abound. In a 2011 article, Murphy expressed the sentiment that 'Labour still loves Israel', condemning the principled decision of the TUC to review its relationship with Israel's racist trade union, the Histadrut.[1] At that point in time, Murphy called trade unionists' decisions to respond positively to the Palestinian call for Boycott as a 'step backwards', yet since then, no doubt much to Murphy's chagrin, the Scottish TUC has reaffirmed its support for the Palestinian call for Boycott, Divestment and Sanctions year after year.

Murphy's recent complicity in Israeli atrocities goes on. Murphy has visited Israel at least three times since 2011: in June that year, receiving a £3,234 donation[2] from pro-Israel lobby group BICOM to cover his expenses; in September 2012, to speak at the annual Conference of the 'International Institute for Counter-Terrorism'[3] in Herzliya, and again in October 2013, on a visit with a 'defence and security focus', which included visits to the Israeli-occupied Syrian Golan and to Israel's apartheid wall in the West Bank.[4] To an Israeli audience, Murphy lauded the State as a partner in ensuring 'anti-autocratic instincts which gave birth to the Arab Spring are not abused by those who seek control for malign purposes'.[5] Israel has been a vital partner, yes, but in the suppression of these anti-autocratic instincts, lobbying hard for the restoration of US military aid to Egypt following General Sisi's coup last year. Following Israel's November 2012 attack on Gaza, Murphy spoke only of Israel's alleged 'right to defend itself', without as much as a passing condemnation of the murder of hundreds, many of them already refugees, in one of the world's most heavily populated strips of land.[6]

Whilst Murphy has claimed that that 'to equate Israel with the vile racist regime in South Africa is both ignorant and outrageous', veteran leaders of South Africa's liberation struggle such as Archbishop Desmond Tutu have long condemned Israel as an apartheid state; Israeli poet Yitzhak Laor has gone further, noting that 'the system preserving this apartheid is more ruthless than that seen in South Africa, where the black were a labour force and could therefore also make a living.'[7]

Such an apologist for the State which has perpetrated the ethnic cleansing of the indigenous people of Palestine from 1948 to the present day should have no place whatsoever in Scottish politics, let alone as Leader of Scotland's second-largest political party. We urge all those with a vote in the Scottish Labour leadership election not to cast their vote for Murphy under any circumstances, and to hold the other leadership candidates to close scrutiny with regards to their positions on Palestine.

[1] The Histradrut refuses Palestinians living in the West Bank and Gaza Strip membership, as well as migrant workers living in Israel, yet has thousands of members living and working in illegal settlements. For more information on its practices, see Brighton UNISON activist Tony Greenstein’s 2009 Electronic Intifada articlehere: http://electronicintifada.net/content/histadrut-israels-racist-trade-union/8121
[2] ‘Changes to the Register of Members’ interests: Jim Murphy MP’ http://www.theyworkforyou.com/regmem/?p=10453
[3] The IICT’s annual conference is a frequent gathering point for Israeli leadership (regularly featuring Benjamin Netanyahu and Ehud Barak), and neoconservatives and Islamophobes from across the world (including Daniel Pipes, Steve Emerson, and fringe South African academic Hussein Solomon, who claimed that ‘terrorist training camps’ were in place ready to undermine the 2010 World Cup). http://www.ciibroadcasting.com/2013/05/17/al-qaeda-in-south-africa-allegations-the-israeli-connection
[4] http://www.lfi.org.uk/shadow-secretary-of-state-jim-murphy-leads-defence-and-security-focused-delegation-to-israel-and-the-palestinian-territories/
[5] http://www.jimmurphymp.com/news-room/Speeches/news.aspx?p=1041386
[6] ‘Some thoughts on the Israel-Gaza conflict’. http://www.jimmurphymp.com/jims-blog/blog.aspx?b=19
[7] http://www.scottishpsc.org.uk/index.php/component/content/article/199-all/1222-scottish-secretary-of-state-takes-on-mandela-a-tutu