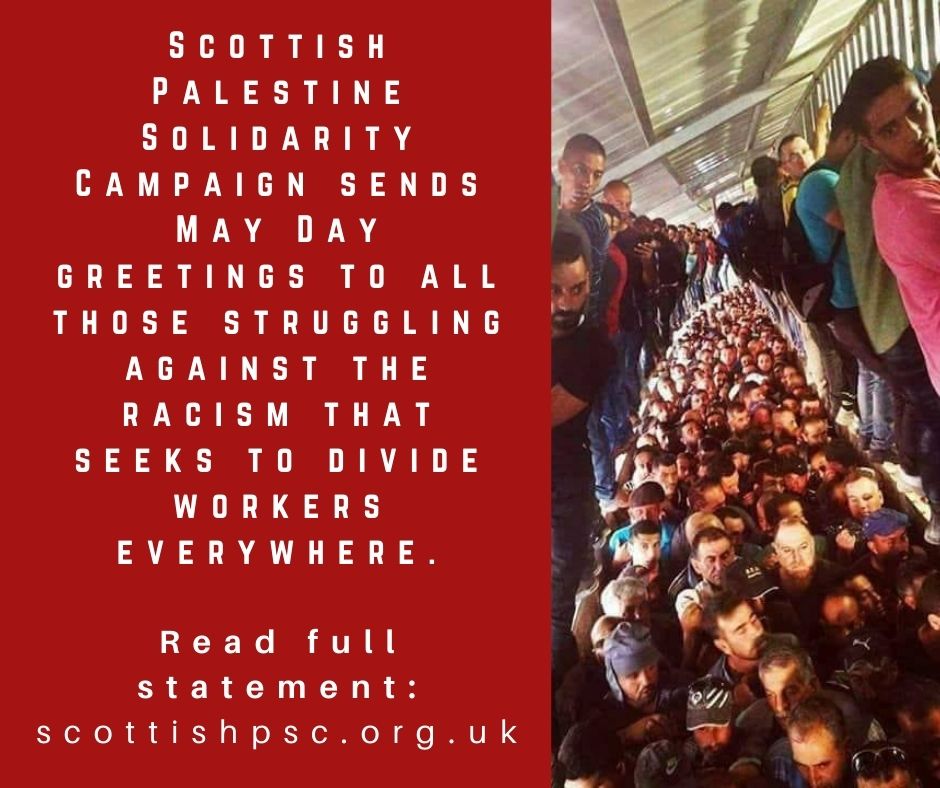 Scottish Palestine Solidarity Campaign sends May Day greetings to all those struggling against the racism that seeks to divide workers everywhere.

Palestinian trade unions and workers struggle under a brutal apartheid regime for even the most minimal human and labour rights.

The JNF-KKL (Jewish National Fund) is a pillar of Israel apartheid that helped prepare the 1948 killings and, as a charity in the UK - Patrons Tony Blair and Gordon Brown - fundraises from ethnic cleansing in Palestine today. See

Palestinian testimonies are corroborated  by reports by the Zionist military units and other Israelis. Almost a month after the killings,  one Israeli reported from Ayn Al Zaytoun that in addition to the executed men and youths

"The  village had been totally destroyed, and among the debris there were many bodies. In particular, we found many bodies of women, children and babies near the local mosque. I convinced the army to burn the bodies".

Here is the testimony, recorded on May 1st, 2021 in Homs, Syria, of Ahmed Mari Al Asaad, a six-year-old survivor of the massacre.

That massacre was one of many by the apartheid regime that continues to oppress Palestinians to the present day.

Stand up to all racism!
Boycott apartheid Israel!
Freedom for Palestine!
Stop the JNF!

UK GOV WORKS TO ISOLATE GAZA UNDER ISRAELI ATTACKOn this day in 2018, UK abstained on a vote at the UN Human Rights Council to send a commission of enquiry to Gaza. The UK attacked the resolution as
...