Condemnation of terrorism must not be selective

"Selective condemnation of ‘terrorism’ has got us to this dangerous state; a trial for terrorism with Al Qaeda, Tony Blair and Netanyahu in the same dock would make the world a much safer place - for everyone." 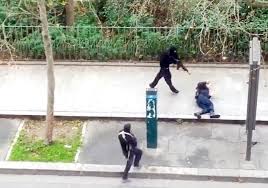 ed and killed twelve people at the offices of the satirical magazine Charlie Hebdo in Paris. The killing of unarmed civilians by state or non-state actors is a crime and the attackers are to be condemned unreservedly.  Armed opposition to military invasion and occupation is an inalienable right; killing those who criticise or even verbally demean opponents is an attack on our collective rights.

It is likely that this act is linked to groupings like Al Qaeda which were initially backed by the US, and who have grown as a response to the Western invasions and devastation of the Middle East, with support from fractions of the ruling family in Saudi Arabia. The massacre of a dozen defenceless people in Paris has roots in the US-led invasion of Iraq that has killed hundreds of thousands of innocent civilians, the invasion of Afghanistan that killed many tens of thousands, the NATO attack on Libya that stimulated the civil war there, and the ongoing ethnic cleansing of Palestine that is backed by the main western powers.

To make the world safe from terrorism it is essential to condemn all terrorism against innocent civilians, including that carried out by our own governments, NATO

and brutal allies such as Israel.

Selective condemnation of ‘terrorism’ has got us to this dangerous state; a trial for terrorism with Al Qaeda, Tony Blair and Netanyahu in the same dock would make the world a much safer place - for everyone.