Don't Dance with Israeli Apartheid at the Edinburgh Festivals

The Confederation of the Friends of Israel Scotland has announced a provocative all-day event during the world’s biggest arts event, the Edinburgh Festival & Fringe; on Wed 17 August at Central Hall at Tollcross, Embassy-funded Friends of Israel and StandWithUs are organising a ‘Shalom Festival’ to promote Israeli 'democracy and tolerance of minorities'. 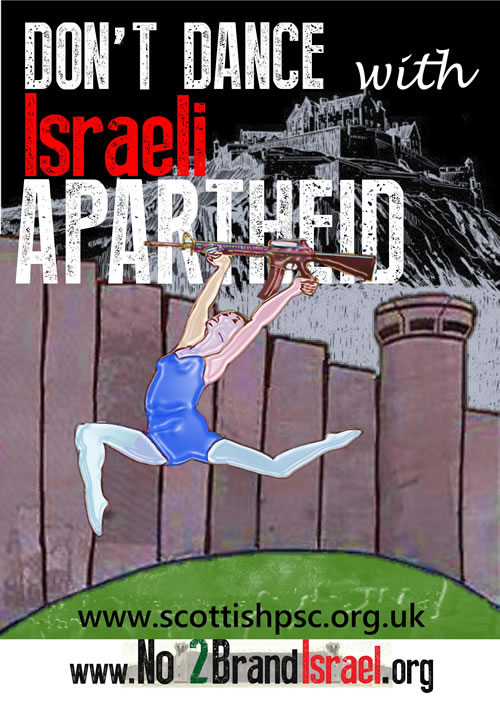 The primary Israeli aim is to reverse the achievements of BDS campaigners over many years in Scotland that has seen defeat for efforts by the Israeli Embassy to insert Israeli State-promoted groups into Scottish cultural events. Will you help us to defend this record and, from August 13th to 17th, send a loud message to beleaguered Palestine (and around the world) that Israeli State-sponsored pseudo-cultural events cannot be held, or can only go ahead in the face of popular outrage?

The dispossession of the Palestinian people continues, with its attendant brutality – killings punctuated by periodic massacre, mass kidnapping, torture and the destruction of Palestinian homes and farms, the denial of water and the barbaric siege of Gaza. Israel’s war on Palestinian culture is not the least of its crimes; the promotion at this time of ‘Brand Israel’ as a part of the Edinburgh Fringe is an outrage and we ask you to join us in our opposition. PACBI (the Palestinian Campaign for the Academic and Cultural Boycott of Israel) has issued an international call to support this initiative.

SPSC will arrange for local hosts to provide solidarity accommodation for those joining us from outside the city to campaign.

Speakers include Ilan Pappé, Ben White and Ruba Salih. Omar Barghouti, the founder of the BDS movement, now barred from leaving Israel/Palestine by the Israeli occupation, will address the conference by video-link.

The so-called 'International Shalom Festival Gala Concert' is nothing more than an explicit attempt to whitewash the crimes of a state, in this case the state of Israel. Edinburgh Festival Fringe should not be helping to promote an event that is openly being promoted by its sponsors as state propaganda, propaganda for a state that stands accused by Amnesty International, Human Rights Watch, the United Nations and other bodies of war crimes and possible crimes against humanity.