Representing over half a billion Christians around the world, when the World Council of Churches (WCC) agrees a statement recognizing that “so long as underlying injustice persists there can be neither peace nor security for either Israelis or Palestinians even the most fanatical of the Israeli government might be minded of the Writing on the Wall. 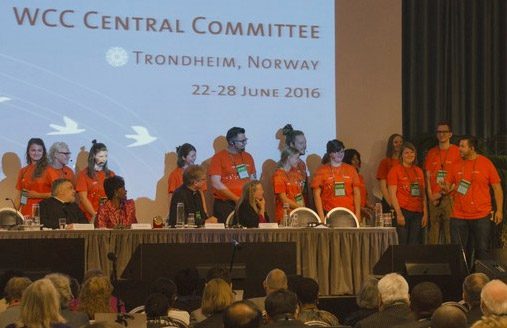 The WCC has made its strongest statement to date on the Israeli-Palestinian conflict and the so-called peace process.  The Central Committee met in Trondheim, Norway, 22-28 June noting (in contrast to Cameron's disgusting plans to mark the centenary of the Balfour declaration) that “next year – 2017 – will mark a painful anniversary: 50 years since Israel began its occupation of East Jerusalem, the West Bank, the Gaza Strip and the Golan Heights.”

They then set out their position on the subject of violence and terror: “The WCC has consistently denounced the use of violence and acts of terror, whether by the State of Israel or by Palestinian groups and individuals.

“Against all the pressures of desperation, provocation and incitement to violence, the WCC has sought to encourage and accompany Palestinian people and communities, and member churches and partners throughout the world, in their efforts to resist occupation, including through economic measures such as divestment from companies profiting from the occupation and boycotting goods produced in illegal settlements on occupied territory. Such actions seek to advance the cause of peace with justice in Israel and Palestine through active non-violent means, using criteria rooted in faith.”

On a side note, it seems that, rather than focusing the state’s efforts upon sustaining that veneer of civilisation which had, at one time, garnered a degree of favourable public opinion,  the inexorable isolation of Israel is increasingly fuelling a siege mentality, one of suspicion and an open hostility to ambassadors from the civilized world: “The WCC itself has encountered aggressive attitudes and actions by the authorities of the State of Israel, with several WCC staff and representatives of member churches and partners seeking to enter Israel having recently been subjected to exceptionally aggressive, intimidating and abusive interrogation and treatment, including detention for up to three days and deportation.”

Touching again on BDS, the WCC statement calls for member churches to promote and support “all non-violent efforts to end the occupation (including considering appropriate economic and other measures).”

Christian Zionism then gets a truth-laden broadside: WCC calls for member churches to “recognize the danger of using scripture to in any way justify occupation, and to recognize Christian Zionism as a form of Christian fundamentalism endangering especially indigenous Palestinian Christian communities.”

Likewise, the efforts of pro-Zionist governments to criminalize solidarity come in for a special mention: the WCC “expresses its concern regarding efforts in legislative bodies throughout the world to silence and penalize calls for non-violent measures to resist illegal occupation, but rather reiterates its support for freedom of expression in all contexts and non-violent means for transforming conflicts.”

All in all, I’d say it doesn’t take a Daniel to translate the message but I wouldn't hold out too much hope of Netanyahu's enchanters and diviners figuring out the subtext!