As the mass murder in Palestine continues, pro-Israel campaigners are reluctant to discuss what's going on in Israel/Palestine. They much prefer to change the subject, away from the genocidal nature of Israeli behaviour and towards smearing Palestine campaigners as 'racists'. The good news is that they often have to invent such stories, a sure sign of desperation. 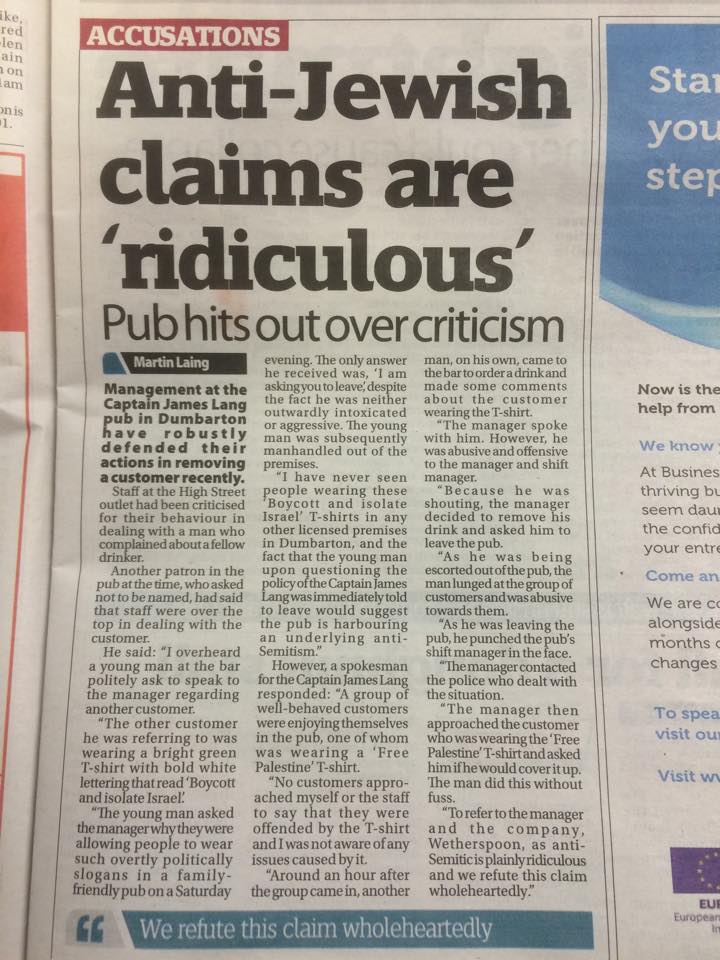 January 21st
The Lennox Herald in Dunbartonshire ran a story that was half true and half accurate. The fabrication is from an anonymous individual (apparently delivered by telephone). The second part reports bar staff accurately describing how a drunken hooligan attacked a group of patrons in a bar, one of whom was wearing an SPSC T-shirt with 'Free Palestine' on the front and 'Boycott & Isolate Israel' on the back. The shirts are very popular. Not much of a story here, you might think.

Zionists are always trying to get Jews to leave their home country for Israel. The common bond the Zionist movement has always had with the worst anti-semites is their agreement that Jews should not live in Europe but need to leave. Whipping up fears of alleged anti-Semitism where none exists serves the Zionist cause almost as much as the real thing in that it can create a climate of fear that might induce some Jews to leave for Israel, the Zionist project to dispossess the Palestinian people.

SPSC opposes anti-semitism because
*it is a species of racism, abhorrent to us
*it strengthens Zionism 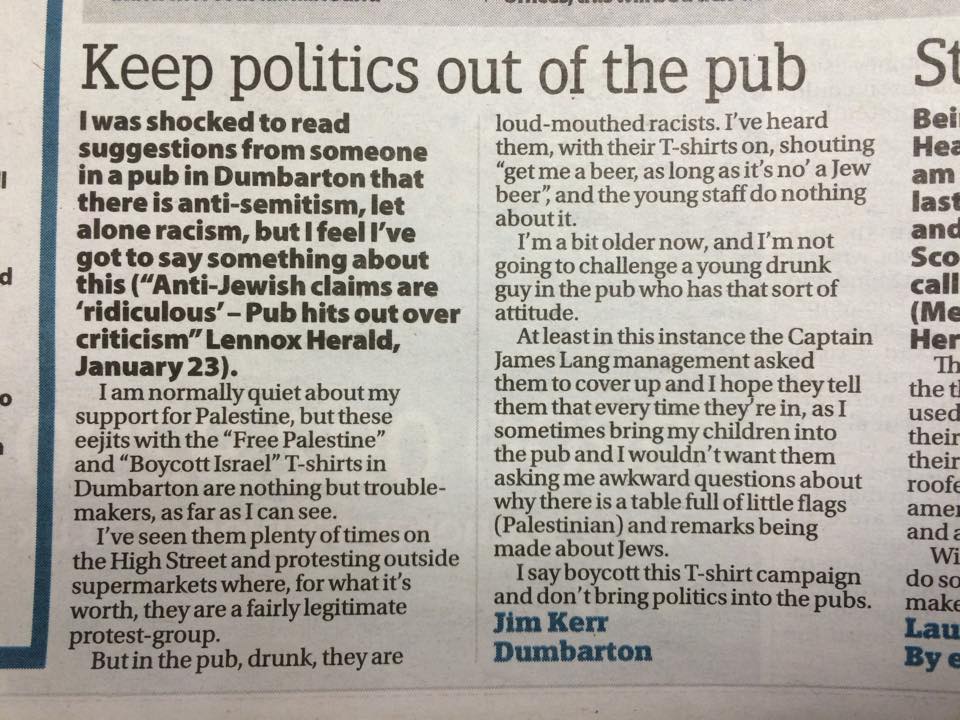 nuary 28th
More complete fabrication to smear Palestine campaigners in Dunbartonshire. West Dunbarton Council, the first of the four Scottish councils to adopt a policy of BDS, general boycott towards Israel, was on the receiving end of an internationally coordinated Zionist campaign to show that area, and Scotland as a whole, as suffering from anti-semitism similar in intensity to Nazi Germany. Bizarre stuff.

Now the same theme is resurrected in letter from one 'Jim Kerr', claiming that a Dumbarton pub was the scene of T-shirted louts routinely shouting Nazi-style obscenities across the pub, without any protest from other patrons and staff. A nightmare scenario if true but, it turns out, completely invented. Devoid of any truth whatsoever. Not one-sided, partially true, or a distorted version of something that happened.

A complete invention by 'Jim Kerr' who might soon be hearing from SPSC lawyers. Legal action we have taken in the past has forced Zionist leaders to pulp 6,000 copies of a defamatory work claiming that SPSC 'demonised Jews' and other scurrilous rubbish. 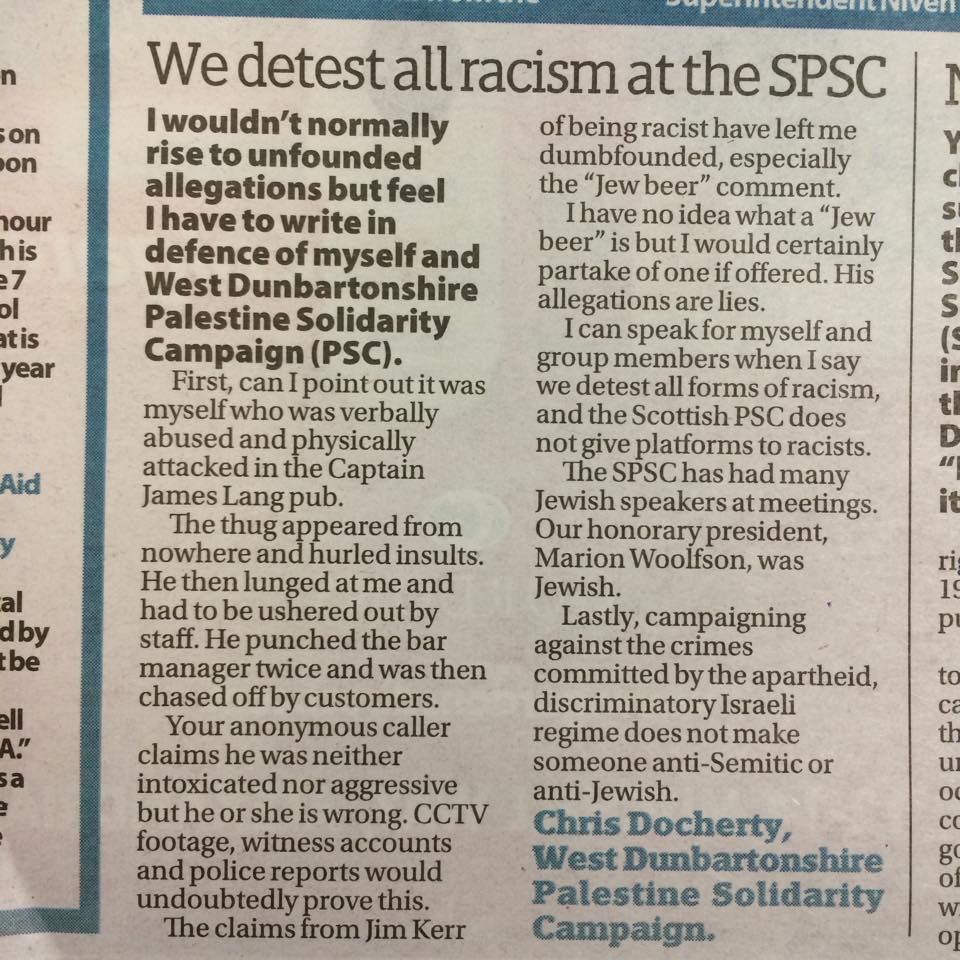 February 11th
The Lennox Herald printed a clear and unabiguous letter from Chris in West Dunbarton SPSC, and one from SPSC nationally. 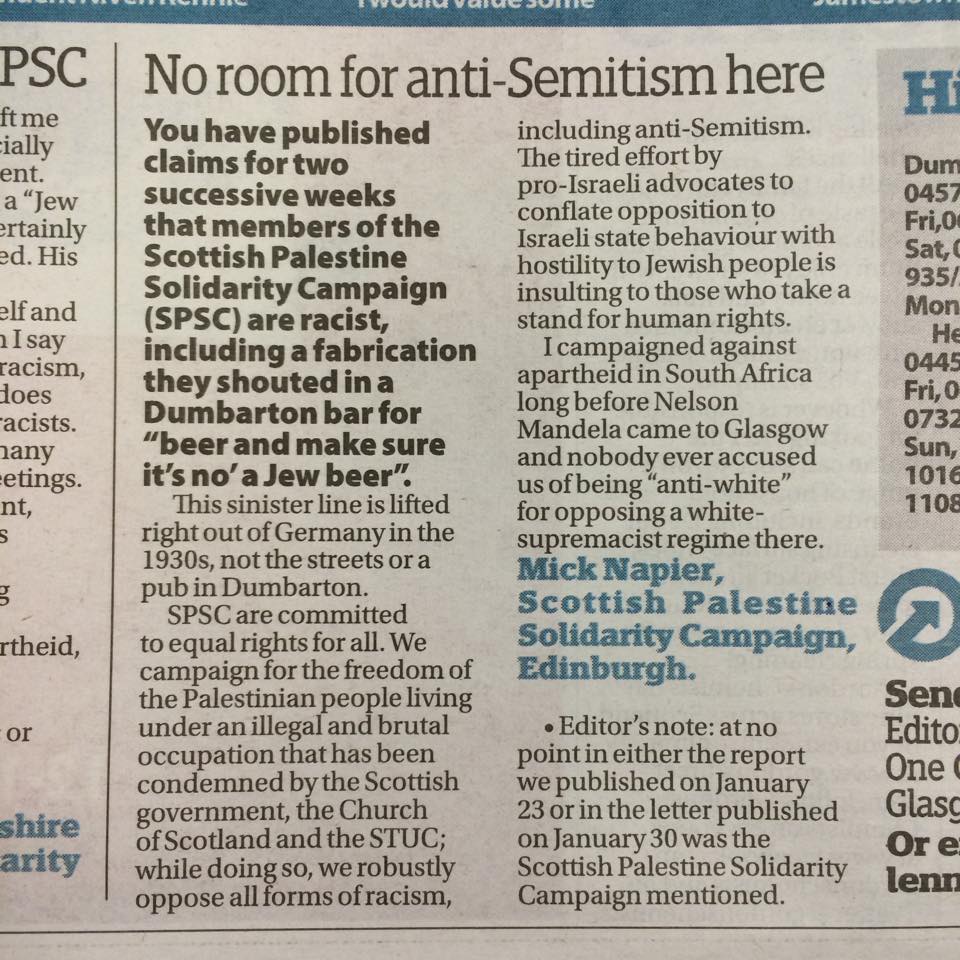 Mick Napier
West Calder
11 February 2015
This email address is being protected from spambots. You need JavaScript enabled to view it.