After four days of evidence and cross-examinations earlier this month, a trial enters its final moments tomorrow of two members of SPSC on charges of 'racism'. The two stand accused of aggravated tresspass for a protest against Israeli Dead Sea operation, Jericho cosmetics. Israel's massacre of 2,200 Palestinians, including 551 children, ended on August 26th and the protestors of September 13th who denounced that massacre of Palestinians stand  accused by Scottish legal prosecutors of 'racism', i.e. being motivated by hatred of Israelis rather than opposition to Israel's repeated massacres, apartheid across the whole of Palestine and genocidal violence in Gaza.

The High Court in London ruled last week that the Tory government acted unlawfully when it tried to prevent local councils in the UK from divesting from firms involved in Israel’s military occupation. The successful legal challenge for the right to boycott was brought by the Palestine Solidarity Campaign in London, supported by War on Want, the Campaign Against the Arms Trade and the Quakers. Given their past record, it is unlikely even this High Court ruling in favour of BDS will stop Scottish legal prosecutors' releated efforts to criminalise BDS in support ofr Palestinian freedom.

The Prosecutor - Procurator Fiscal in the Scottish legal system - has alleged in open court that the accused in the Glasgow case were recycling an ancient anti-semitic 'Jewish blood libel' by speaking about Israeli mass murder of Palestinians while the violated people of Gaza were still looking for ice-cream and vegetable refrigerators to store bodies of children killed by Israel's military. 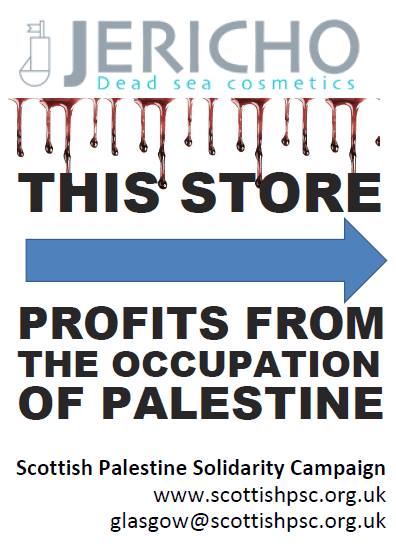 One of the accused, Mick Napier, gave his testimony on Friday 9th June and Jim Watson will take the stand tomorrow to complete the rebuttal of claims made by prosecution witnesses - a Chief Inspector, the manager of the Jericho stall and two Glasgow Zionist activists. The PF's claim is that staff were intimidated by racist placards and the shouting of racist abuse, which seems to have consisted of apparently by denouncing the pro-Israeli counter-demonstrators on the day for supporting Israel's recent massacre of Palestinians. The 'racist' placard is reproduced here; the PF took particular issue with the symbolic blood dripping under 'Dead Sea cosmetics' onto 'THIS STORE'. When even the usually craven UN Secretary-General called Israel's massacre of thousands of Palestinians a 'moral outrage and criminal act' and a 'gross violation of humanitarian law', when the Scottish Government had joined in denouncing the 'deep inhumanity' of the Israeli massacre, Scottish procurators fiscal worked hand in glove with pro-israel lobby groups to silence voices of Palestine solidarity.

SPSC has withstood repeated efforts by pro-Israel lobbyists and Scottish PFs to criminalise Palestine solidarity activities; the Zionist record so far is one of virtually complete failure. An example was an attempted fit-up by two employees of the Zionist CST that was thrown out of Kilmarnock Sheriff Court in Feb last year when the Sheriff ruled that the crime as alleged had not taken place. Had we not had the benefit of an Al Jazeera Arabic language broadcast of the protest where the Zionist CST tried to secure an assault conviction they might have secured a different outcome.

The Glasgow trial that ends tomorrow shows that the pro-Israel gang will keep on working to smear opposition to Israel's state-enforced racism and massive violence against defenceless civiliansd as 'racist' and 'violent'.

Come to Glasgow Sheriff Court #16 in Carlton Place tomorrow 11am to see how bizarre the claims of a Scottish Procurator Fiscal can be in an ongoing, long-term effort to smear Palestine solidarity activists as racists.