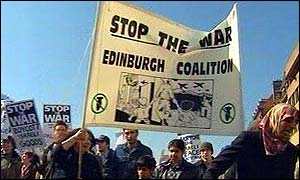 The demonstration passed off peacefully

Hundreds of people have marched through the centre of Edinburgh to show solidarity with the Palestinians.

The protesters called for an immediate end to Israeli military action in the West Bank.

The demonstrators also said Israel must give up all the territory it has occupied since 1967.

It has been estimated that 2,000 people joined the march and many carried Palestinian flags, while others carried placards of people they say were killed by the Israelis.

Mick Napier, of the Palestine Solidarity campaign, said: "The Palestinians are the longest standing unresolved injustice of the century.

He said the public should be on the lookout for products like some oranges, avocados and vegetables.

He told BBC Scotland: "We have a special duty to come to the aid of the Palestinian people and every person can do it by personally making purchasing decisions which hurt the ability of the Israeli economy to function normally."

After Saturday's march SNP MSP Margo Macdonald likened the Palestinian's plight to that of the Scots 600 years ago.

Jimmy Powdrell Campbell 6 days ago 11 May
Also on this day: murder of Al Jazeera journalist Shireen Abu Akleh while she was covering an IDF raid on ...
Alana Terego 14 days ago 24 February
The attacks happened AFTER the war has ended and despite Israel's promise in the armistice agreement that residents who wished ...
TT 21 days ago 5 July
Also in the Lancet: The Palestinian people: erased from World Health Statisticshttps://www.thelancet.com/journals/lancet/article/PIIS0140-6736(22)01055-8/fulltext?dgcid=raven_jbs_aip_email
TT 22 days ago 11 May
11 may 2022 murder of Shireen Abu Akleh
TT 26 days ago 27 March
Saudi Arabia... is expanding its secretive talks with Israeli leaders https://www.wsj.com/articles/saudi-arabia-moves-toward-eventual-ties-with-israel-11654517783?mod=article_inline