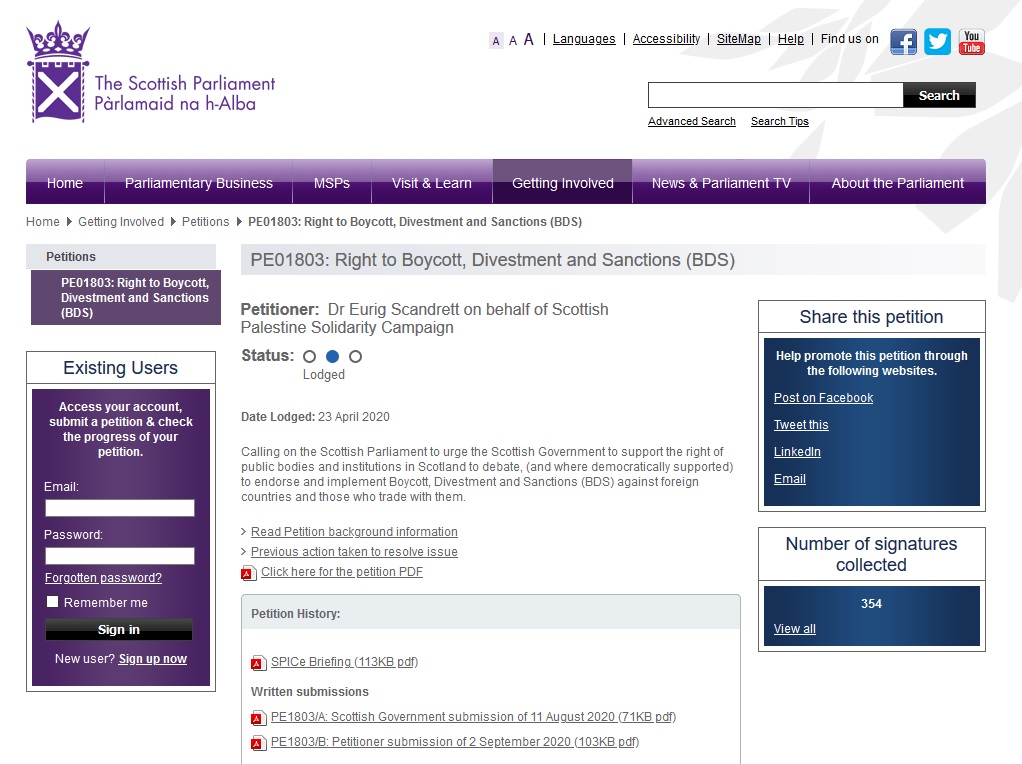 Scottish Palestine Solidarity Campaign (Scottish PSC) has welcomed a statement by the Scottish Government responding to their petition PE1803: Right to Boycott, Divestment and Sanctions (BDS):

‘We have... been clear that we do not wish to mandate how Scottish public institutions, organisations or individuals approach this issue. We would, therefore, strongly encourage the UK Government to develop their legislation in a manner which restricts the scope of application, and respects the autonomy of Scottish institutions in making decisions on this issue’.

Scottish PSC lodged their petition in April 2020 calling on:

‘the Parliament to urge the Scottish Government to support the right of public bodies and institutions in Scotland to debate, (and where democratically supported) to endorse and implement BDS against foreign countries and those who trade with them.’

The petition was raised following the December 2019 Queen’s Speech which stated that the UK Government will ‘stop public institutions from imposing their own approach or views  about international relations, through preventing boycotts, divestment  or sanctions campaigns against foreign countries and those who trade  with them’. However, public institutions in Scotland are the responsibility of the devolved administration in Holyrood. Scottish PSC, which campaigns in support of BDS, argued that Scottish public institutions should therefore retain the right to BDS.

Dr Eurig Scandrett, Chair of Scottish PSC, lodged the petition on behalf of the organisation.  He welcomed the Scottish Government position:

“We welcome the Scottish Government’s statement reiterating their position strongly discouraging ‘trade and investment from illegal settlements’ and that they agree with us that Scottish public institutions, organisations or individuals should be free to debate, endorse or implement a policy of BDS. Several public institutions have already done so: over the last few years both Tayside and Falkirk pension funds have divested from Bank Hapoalim, an Israeli bank which invests in the expansion of illegal settlements on occupied Palestinian land.

“We are also encouraged that members of the Petitions Committee have expressed their support for this position.  We would have preferred the Committee to go further, and urge the Scottish Government explicitly to support the right to BDS. However the Committee’s endorsement is welcome and a green light to public institutions that support Palestinian human rights to debate, endorse and implement BDS”.

During the Petitions Committee discussion, several MSPs expressed support for the spirit of the petition although members appeared to have misunderstood what the petition was calling for, which was for the Scottish Government to support the right of public bodies and institutions in Scotland to debate, endorse and implement BDS, rather than for the Scottish Government to mandate that public bodies and institutions adopt a policy of BDS.

David Torrance MSP said: “I have some sympathy towards this petition but seeing that the Scottish Government does not support it (sic) and does not wish to mandate public institutions I’d be happy to close it”.

Maurice Corry MSP added, “I don’t want to see the Scottish Government mandating organisations, institutions on how they source their material or services”.

Gail Ross MSP added that “the Scottish Government have made very clear that they don’t want to mandate how institutions approach the issue and I think that in a democratic society is the right way to go”.  Scottish PSC wholeheartedly agree.

Petitions Committee Convenor Johann Lamont MSP, however, seemed to recognise the issue of concern raised in the petition:

“We are recognising that there are important issues here and there’s nothing here that’s preventing the BDS campaign from pursuing and arguing for that approach by individual institutions but the Scottish Government’s view is that it’s not the Scottish Government’s job to advocate for that campaign... these institutions and organisations should be able to campaign in this way if they wish”.

To find out more about the Scottish Palestine Solidarity Campaign and how it supports the rights of Palestinians through its campaigns, please visit www.scottishpsc.org.uk or get in touch on This email address is being protected from spambots. You need JavaScript enabled to view it..

For more information please contact: This email address is being protected from spambots. You need JavaScript enabled to view it.

For further information about the Scottish Palestine Solidarity Campaign please go to www.scottishpsc.org.uk

Khurram Haseeb 2 hours ago Contact us
Hi, We are planning to arrange a peaceful demonstration on the 23rd of May 2021 in connection with the recent attacks carried out by the Israeli authorities at Al-Aqsa mosque during the holy month of Ramadan. We will appreciate it if you can join us in that peaceful event. We are going to have representatives from the three masjids in Aberdeen. The final location for the demonstration is yet to be confirmed. Waiting to have a positive response from your side.
Please contact me on khurram_h@msn.com for more details.