Answers to Quiz: Palestine, Israel & Zionism as seen from Scotland 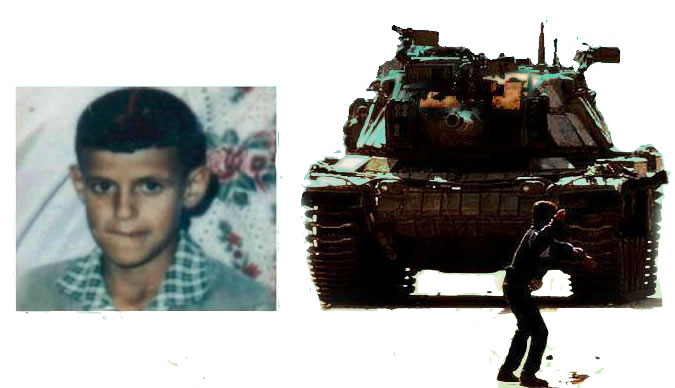 Q.1   What is the name of the boy in this iconic image from 2000 (shot dead days later by an Israeli sniper)?Faris Odeh

"...there is surely neither hope nor meaning in a 'Jewish National Home', unless we are prepared to let Jews, if they wish, enter this tiny land in such numbers as to become a majority. There was a strong case for this before the War. There is an irrefutable case now, after the unspeakable atrocities of the cold and calculated German Nazi plan to kill all Jews in Europe... let the Arabs be encouraged to move out as the Jews move in."

Q.4 Which leading 'Father' of the colonisation project in Palestine, prominent Zionist academic and founder of the kibbutz movement claimed ancient 'Aryan' Jews were corrupted by an infusion of Semitic genes that only Zionism can get rid of?
Arthur Ruppin
The 'father of Zionist settlement in the land of Israel' has Arthur Ruppin Boulevard alongside the Israeli Parliament named after him. His racism, including a virulent strain of antisemitism, was greatly influenced by Nazi ideology.  As well as the link to Tom Segev's short piece in Haaretz, see also Gabriel Piterberg (2008) The Returns of Zionism, pp 81-88.

Q.5   What earlier settler-colonial project did a British Governor see after WWI as a model for the British effort in Palestine?
Ulster
Nu’man Abd al Wahid’s short historical piece is informative on Britain’s reasoning that led to the Balfour Declaration. On 2 November 1917 Britain announced it would open Palestine to European Zionist colonisation. Sir Ronald Storrs, the first British military governor of Jerusalem, explained that the motive was British imperial interest, that the Zionist “enterprise was one that blessed him that gave as well as him that took, by forming for England ‘a little loyal Jewish Ulster’ in a sea of potentially hostile Arabism,” a counter to what Storrs termed the “present aborigines”. British settler-colonialism in Ulster was a model for Britain’s settler-colonial project in Palestine. From the 1920s onwards, the British mobilised Jewish settlers in Palestine to crush mass Arab resistance.

Q.6   What did an Edinburgh City councillor recommend during the 2014 Gaza massacres to discomfit the US for its complicity in Israeli crimes?
Cllr Adam McVey, the Vice-Convenor of Edinburgh City Council’s Transport and Environment Committee put forward the brilliant proposal that the name of the street where the US Consulate stands should be changed from Regent Terrace to Palestine Terrace. Cllr McVey was following the example of Glasgow City Council which renamed St George’s Place in the heart of the city, the street on which the apartheid South African consulate stood, as Nelson Mandela Place in 1986. Much to the fury of the South African diplomats every time they opened a letter.

Q.7   Who could not forgive Palestinians for making Israelis kill them?
Israeli Prime Minister Gold Meir
Born Golda Mabovich in Russia, she once complained that, “We can forgive the Arabs for killing our children. We cannot forgive them for forcing us to kill their children.”  Despite her forgiving nature, she ordered the shooting down of a civilian airliner, Libyan Airlines Flight 114, a regularly scheduled flight from Tripoli to Cairo, when the aircraft became lost because of a combination of bad weather and equipment failure. It entered Israeli-controlled airspace over the Sinai and was shot down by Israeli jet fighters. All but five were killed out of 113 on board.

Q.8   Which major Scottish institution endorsed the right of Palestinian refugees to return to the areas from which they were ethnically cleansed?
The Church of Scotland
The Church General Assembly also rejected the use of the Bible to dispossess any people of their land, including the Palestinian people by Zionism.

Q.9   What member of Labour Friends of Israel is was Chairman of a Scottish football Club and a consultant to Palestinian human rights violators G4S?
John Reid was the intended answer but we’re told he is no longer Chair of Celtic FC. But he is a war criminal and a consultant to G4S

Q.10   How many Scottish Councils have adopted a policy of support for full BDS (Boycott, Divestment and Sanctions) to compel Israel to recognise Palestinian rights? Which Welsh Council has a similar policy?
Four
West Dunbartonshire, Stirling, Clackmannanshire and Midlothian + Gwynedd in Wales

Q.11   Which major Palestinian resistance figure addressed a meeting of all major Scottish religious leaders during a speaking tour in 2014?
Archbishop Atallah Hanna
Archbishop Theodosios of Sebastia from the Orthodox Patriarchate of Jerusalem, also known by his own name, Atallah Hanna, spoke in July 2014 on the current situation facing Palestinians in Israel, the acceleration of Israel’s forced population transfers and the Israeli Government’s latest efforts to divide Christian and Muslim citizens of Israel. He spoke on the topic of “The Palestinian Right of Return is Non-negotiable”.

Q.12   Which famous scientist condemned as Nazis and fascists the Israeli Zionist party that evolved into Netanyahu's Likud Party?
Albert Einstein
Einstein added his name to an open letter to the New York Times on 4 December 1948 denouncing Herut, which evolved into Likud. The letter warned

"Among the most disturbing political phenomena of our times is the emergence in the newly created state of Israel of the ‘Freedom Party’ (Tnuat Haherut), a political party closely akin in its organization, methods, political philosophy and social appeal to the Nazi and Fascist parties. It was formed out of the membership and following of the former Irgun Zvai Leumi, a terrorist, right-wing, chauvinist organization in Palestine."

Q.13   Which British Zionist was jailed in 2013 for stealing over £10,000 of taxpayers' money?
Denis MacShane MP for Rotherham was a high-profile mouthpiece for Israel and a thief. He was sent to jail for defrauding the taxpayer of £13,000 by submitting 19 false invoices "plainly intended to deceive" the parliamentary expenses authority.

Q.14 What is the longest prison sentence served by a Palestinian?
Karim Younis and Maher Younis are now in their 32nd year in prison for killing an Israeli soldier. Israelis who kill unarmed Palestinian civilians don’t need to fear prison. A rare exception was the Israeli Border Police found guilty of the murder of 48 Palestinians in the village of Kafr Qasim in 1956, including 23 children.   All received pardons and were released in less than a year. The Israeli court imposed a fine of less than one shekel on the commanding officer. The sense of impunity with which Israelis in and out of uniform kill Palestinians is stronger than ever.

Q.15   Which adviser to Ariel Sharon described Israeli policy as deliberately reducing the food intake of Palestinians in Gaza?
Dov Weissglass
In 2006, this adviser to Israeli Prime Minister Ehud Olmert said:“The idea is to put the Palestinians on a diet, but not to make them die of hunger.”

Q.17   Which major violator of Palestinian human rights sends employees into most Scottish homes?
G4S
G4S runs parts of Israel’s notorious prison system where torture is routine.  G4S has contracts with Scottish Power and many other UK electricity and gas providers to read domestic meters. Don’t admit them.

Q.18   Which Zionist ethnic cleansing organisation was kept at arm's length by David Cameron, Clegg and Miliband but is still sponsored by Tony Blair and Gordon Brown?
JNF - Jewish National Fund
See the letter from Hajo Meyer exposing the JNF . Hajo was a member of the Dutch resistance who survived Auschwitz

Q.19   Name three Israeli State-sponsored cultural efforts that failed in Scotland this year.
In April the Edinburgh Stills Gallery returned Israeli Embassy funding; in August the Incubator Theatre was pulled after protests at Israeli mass murder of Palestinians; Israeli State-funded Pola Dance Company was also disinvited in the face of planned protests at the Israeli massacres of Palestinians. Two Israeli acts at the Edinburgh Fringe with no links to the Israeli State were not targeted. Scottish Government Culture Secretary Fiona Hyslop declared herself against a cultural boycott of Israeli State-endorsed institutions. The Scottish Government declared a boycott of all Russian cultural events during UK/Russia Year of Culture 2014.  Acccording to The Herald:  'A Scottish Government spokeswoman said: "The Scottish Government is no longer actively supporting the UK/Russia Year of Culture 2014 and Ms Hyslop is not attending any planned Russian events taking place in Scotland under this initiative.'

Q.20   At the trial of SPSC members for 'racially aggravated conduct' the Scottish Procurator Fiscal (Prosecutor) claimed which of the following utterances was in itself a racist act?

a. "Zionists should leave Palestine!"
b. "Jews control Hollywood!"
c. "End the siege of Gaza!"
d. "The Israeli army kills children for sport!"

The answer is actually 'c'.
The Edinburgh Procurator Fiscal (name for Prosecutor in Scottish legal system) argued in open court that it is ‘racist’ to say the words ‘End the siege of Gaza!’ or ‘Genocide in Gaza!’ The story was carried by theBBC, The Herald and major UK news media. Two SPSC members face renewed 'racially aggravated' charges in Glasgow Sheriff Court May 7th (same day as general election). What on earth will the PF pull out of the bag on May 7th? Watch this space.