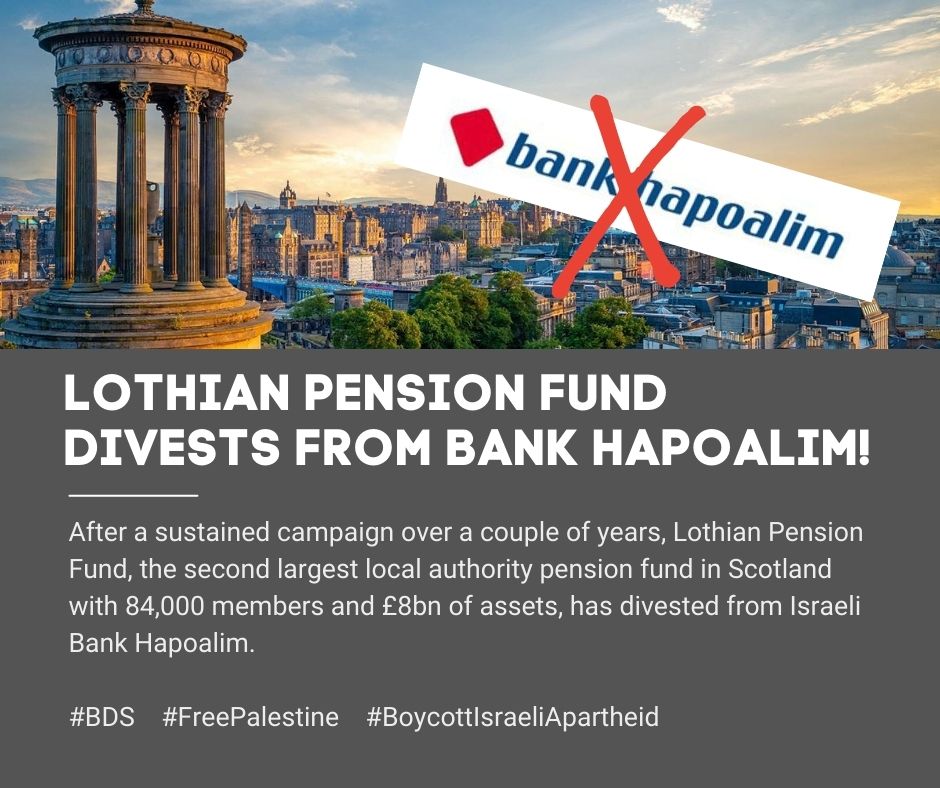 Lothian Pension Fund, the second largest local authority pension fund in Scotland with 84,000 members and £8bn of assets, has divested from Israeli Bank Hapoalim. This is the third such decision in Scotland to divest from Bank Hapoalim; Falkirk Pension Fund divested in 2018 in response to divestment pressures from activists and trade unions; in early 2019 Tayside Pension Fund followed suit. As at January 2021, Lothian Pension Fund was the only Scottish local authority pension fund to still have holdings in the bank which would mean that now all of Scotland’s eleven Local Authority Pension Funds are free of investments in this company.

Bank Hapoalim is listed in the UN’s database of business enterprises involved in activities that impact on the civil, political, economic, social and cultural rights of the Palestinian people throughout the Occupied Palestinian Territory, including East Jerusalem. The UN’s investigation found that Bank Hapoalim’s activities relate to:

Lothian Pension Fund had defied pressure to divest from Bank Hapoalim until recently, despite regular lobbies of pension fund committee meetings and Councillors receiving thousands of emails from constituents across the Lothians. In December 2019, a delegation from the Time to Divest campaign met with Lothian Pension Fund’s Chief Executive Officer and his team but failed to secure agreement that the fund should adhere to their commitment to the UN Principles for Responsible Investment and ensure they do not invest in companies found to be complicit in human rights abuses.

Scottish Palestine Solidarity Campaign initiated and work with partners, in particular with Unison Scotland, in the Time to Divest campaign to secure these landmark victories. Much remains to be done to pressure further divestment by Scottish local authority pension funds from arms companies and other commercial operations which are complicit in what Human Rights Watch refers to as ‘crimes against humanity of apartheid and persecution’.

Our campaign continues – we are showing across Scotland that sustained pressure can deliver results. How much more could we do with you and your friends on board!

Get in touch, get involved – This email address is being protected from spambots. You need JavaScript enabled to view it.