Zionists lament that Scotland is "worst" for Palestine solidarity

So why are political Zionists so worried? Their internal discourse worldwide shows an awareness of rising hostility to the crimes of the State of Israel, crimes and a state they support and finance.

A rare JNF event in Scotland confirmed that Scotland is part of this long term trend in public opinion, with a leading pro-Israel apologist, Paul Morron MBE, despairing that "I don't think that the Scottish Parliament can get much more anti-Israeli than it currently is...There is already a major anti-Israeli movement in Scottish political and other spheres of life." And since Israel is already a pariah state in public opinion worldwide, he laments that Israel is being deserted by those who previously supported it. "Where are the political party voices in Scotland countering the propaganda?" (Jewish Telegraph, 4th April 2014) The answer is...none. 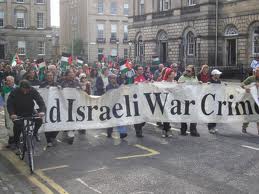 Vivian Wineman, UK President of the Zionist-dominated Board of Deputies of British Jews, noted the spreading hostility to Israel's ethnic cleansing and apartheid, and expressed his concern "about the level of anti-Israel sentiment in the government, local authorities and the Church of Scotland." Paying a back-handed compliment to pro-Palestine advocates, the Jewish Telegraph reports that Mr Wineman also said that the UK Zionist leadership was aware that the "worst manifestations of the Palestine Solidarity campaign" have been in Scotland.

As an example of Mr. Wineman's "worst manifestations" of solidarity with the Palestinian people, one JNF supporter, Gila Hackenbroch, recalled "attending a JNF KKL Scotland event in Glasgow with all the demonstrators outside and the noise. It was scary and I'd never experienced anything like it before."

Protest works; this voice should encourage us to intensify our solidarity mobilising, since it was determined demonstrations against JNF fundraisers at the Glasgow Hilton that brought these annual provocations to an end. A determination to deny the racist JNF the possibility of business-as-usual has led to the cancellation of virtually all the JNF's successor fund-raising events in Scotland. We must ensure, however, that the JNF KKL and other agents of the apartheid State of Israel continue to be challenged vigorously every time they appear in public.

The next racist provocation by the JNF will be in London on the evening of Thursday 15th May when Israeli war criminal Tsipi Livni is due to speak at a Central London JNF event. May 15th - Nakba Day - is the day each year when Palestinians and human rights supporters commemorate the successful and bloody biggest single wave of Zionist ethic cleansing in Palestine, in 1948.

The JNF KKL Scotland is the local unit of JNF International, whose Israeli section oversees the State programme to make as much as possible of Palestine completely free of Palestinians. The racist activity of the JNF, if carried out here in the UK, would constitute a clear crime.

In the Zionist lexicon 'democracy' equals 'apartheid', 'defence' means 'aggression' and 'Israeli security' stands for 'terrorising the neighbourhood'. Wineman's view that the 'worst' examples of Palestine solidarity are in Scotland is a back-handed compliment.

Let us be crystal clear; our target is every Scottish institutional support for Israeli ethnic cleansing, whether Gentile or Jewish, Gordon Brown or SCoJeC, ideological or economic. Our foe is political Zionism and its commitment to completing the ethnic cleansing of Palestine. We promote opposition to Israeli crimes and oppose the barbaric notion of collective guilt; Scotland's Jews are in no way responsible as a community for Israeli ethnic cleansing. We recognise only individual liability for actions and look forward one day to meeting Stanley Lovatt and his ilk in a Scottish court of law where he will answer for his financing of Israeli crimes.

We hope the Jewish community in Scotland reverses its historic decline – attributable to obvious demographic trends – and retains a presence in a country that never passed an anti-Jewish law in a violent and sometimes savage history.

Many Jewish citizens are leaving Israel, for a variety of reasons. My son and daughter recently moved to Berlin, and found there tens of thousands of Israelis, many already anti-Zionist. We invite Scottish Jews to persuade their Israeli relatives to move to Scotland as one way to increase the size of the Jewish community here.

On the downside, given the pervasive racism and the Israeli mainstreaming of extreme right wing politics, we would be importing some pretty nasty settler-colonial traditions but, on the plus side, the tolerant air of Scotland will progressively attenuate that pathology and allow the immigrants to develop normal relations with their non-Jewish fellow citizens, something quite impossible in an apartheid state based on Jewish privilege.

In addition, we'd be removing settlers from the privileged Jewish community in apartheid Israel and hastening the liberation of Palestine. It's a win-win situation.

While holding this olive branch to Jewish fellow-Scots and their Israeli relatives, we need to intensify our campaign in the face of accelerating Israeli ethnic cleansing. You can/should help out by