Take out SPSC membership for 2015

This is an appeal to you to join the Scottish Palestine Solidarity Campaign during 2015 to organise against Israel’s genocidal programme. The Palestinian people need some of your energy and intelligence to promote their cause here in Scotland. This appeal is addressed to the thousands who marched at the height of Israel’s massacres last summer and those who have been enraged by recent Israeli crimes.

Israeli atrocities against the Palestinian people and their property continue – mass killings, tree burnings, pumping noxious chemicals onto homes, mass imprisonment, torture, the brutal siege of Gaza. The crimes are made possible by a steady rain of disinformation from the BBC and other mainstream media. 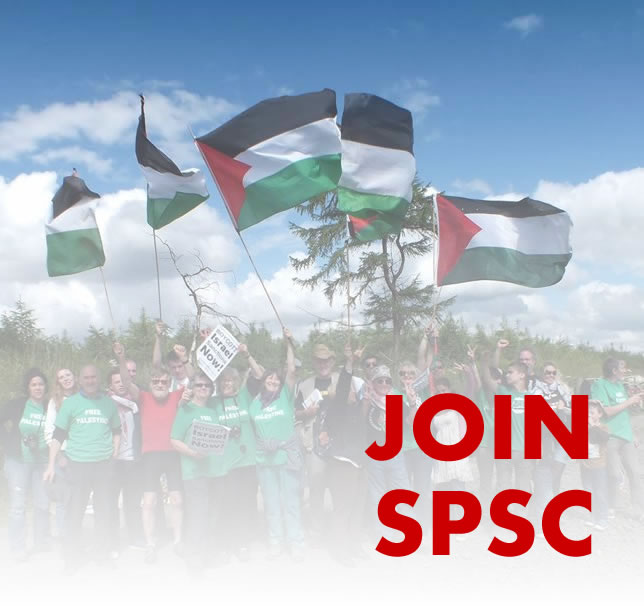 ss Scotland, 52 weeks a year, to channel the widespread support for Palestinian people into effective action. We work to boycott and isolate the State that sneers at UN resolutions to force the recognition of Palestinian human rights.

The British Government is fully complicit in Israel’s crimes, and works to isolate Palestinian people from all international forums. It was the UK that gave Palestine to European colonists and Cameron’s government arms Israel, even refusing to support a UN move for a Palestinian state and an end to Israel’s occupation. Miliband and Clegg are no better and the Labour Party in Scotland is now led by a long-term supporter of every Israeli massacre, Jim Murphy MP. We ask you to take out membership in 2015 because only people like you can end the crimes against the Palestinian people; “We are the people we have been waiting for”.