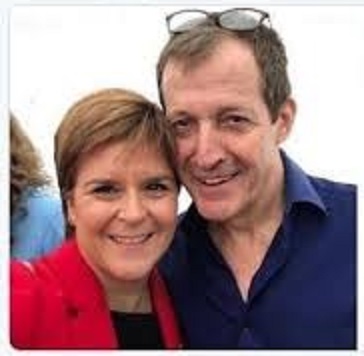 The Scottish First Minister, Nicola Sturgeon, is the keynote speaker at an event in Glasgow on Saturday; "Question Time - Challenging Racism & Islamophobia With The First Minister".

According to publicity for the event, "This exclusive event will facilitate questions from the audience to air their views and concerns and to help work along with the FM to ensure that we are addressing the issues to enable a better society for all."

Questions to the First minister:

1. Will the First Minister end her common position with the Tory and Labour parties of endorsing Islamophobic Glasgow Friends of Israel's bizarre claim to be an "anti-racist" organisation?

The group includes many hard-core, open promoters of Islamphobia; its social media is saturated with anti-Muslim slurs. Members post material from fascist groups such as Britain First and the Glasgow leader was caught working with a notorious neo-Nazi to harass pro-Palestine activity in Glasgow City Centre. Groups of members welcomed the Christchurch massacre of Muslims as "payback for attacks that muslims have perpetrated across the globe. Perhaps this will curb their appetite for bloodshed."  This and similar posts remained public until external pressure had them taken down. Group  members spoke approvingly of "euthanising" Palestinians.

The entire group supports the weekly massacres by Israeli snipers of Palestinian Muslim demonstrators which the UNHRC and Amnesty International have called a war crime.

3. Will the First Minister instruct her ministers not to meet with officials of the Israeli Embassy now that the leader of that government, Prime Minister Netanyahu, has forged an electoral alliance with the neo-Nazi Jewish Power party? This party advocate driving all Palestinian Muslims out of Palestine. Party senior leader, Baruch Marzel, holds a celebration every year at the grave of Baruch Goldstein, who in 1994 massacred 29 Palestinian Muslims at prayer in the Ibrahimi Mosque.

5. Minister Humza Yousaf stated on behalf of the Scottish Government that Israel is not an apartheid state. Yet this is a state where Palestinian citizens - Muslims and Christians - are denied political, economic, employment and residential rights that are reserved exclusively for Jews. How can the First Minister oppose racism and Islamophobia if she refuses to see, identify and condemn all examples of state-sanctioned privilege and racial discrimination?