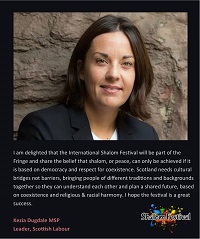 Do SNP and Labour members know how mad are one of the main organisers of the pro-Israel Shalom Festival in Edinburgh, which both party leaders, Nicola Sturgeon and Kezia Dugdale, are endorsing? Nigel Goodrich is the leader of the Confederation of Friends of Israel - Scotland (COFIS) and doubles as CEO of the Shalom Festival. Nigel is a Christian fundamentalist who is very keen for theological reasons to get Scottish Jews to leave Scotland for Jerusalem to speed up the Rapture, the return to Earth of Jesus. COFIS was very excited at the prospect of the Israeli police taking over the Al Aqsa Mosque in Jerusalem and provided a platform for their Christian fundamentalist enthusiasm and rationale. It's useful to know how barking are modern Christian Zionism's foot soldiers.

On July 20 COFIS exulted in the Israeli police takeover of the Al Aqsa mosque, and warned that “Israel must stand strong, and hold on and not let go!!” It shared an article by ‘Gary’, who sees great significance in the Israeli move on the Al Aqsa Mosque. The article is entitled

"BREAKING: Major prophetic development in Jerusalem".
"I'm not sure how to convey to you both the seriousness and awesomeness of what may be transpiring in Israel. In short, the Jordanian Waqf [religious charity] has effectively lost control of the Temple Mount for the first time since 1967. It is now in the hands of Israeli police…"

Gary approvongly quotes ‘Ari Dichter’ (He means ultra-racist Knesset member Avi Dichter) approvingly that “Israel will now work to re-establish Jewish sovereignty over the holy site…The Mount will remain under the control of the Israel Police.” “…

Numbers, especially the number seven (Arabic numeral 7) are important for some Christian Zionists, for Gary sees

"Interesting Connections:
From the Israeli seizure of the Temple Mount on Friday, July 14, 2017 to the Feast of Trumpets, 2017, is exactly 70 days. We are currently in the 70th solar year since the rebirth of Israel and May 12, 2017 was exactly 70 prophetic years since Israel was reconstituted on May 14, 1948.

"Monday, 7/17/17 was when the first Jewish prayers were offered on the Temple Mount. This was also the same date as a 7.7 magnitude earthquake, which occurred exactly 177 days since the last 7.x earthquake.”

COFIS allows Gary to share with us his excitement that this could be big, and the end of the world possibly nigh:

“July 14, 2017 is exactly seven years to the day until Jupiter enters the horns of Taurus the Bull for the possible fulfilment of heavenly signs connected to the Second Coming… Things are now moving very quickly, so for your sake I hope you know Jesus and are right with the LORD.”

Joel Smith seems to have got a bit carried away with Gary's article: “Thank you so much for all your work on your website, it has brought me so much strength joy and peace. with love. Joel...im so excited!!!!!!!”

“The Bible tells us no one knows the day or hour of Christ's coming. We can see it is very close but we are to be ready and looking now. We are to be warning others and getting them to trust Jesus so they too can go to Heaven. Not putting limits on Him. He may come today or 300 years from now but it is closer than ever before. Oh and did you know that a work place in America can put this little chip in your hand and you can buy things out of the vending machines and open locked doors? Look that up.”

“Hi Annabelle, I apologize for not being clear! After Jupiter (Zedek) leaves Virgo in the fall of 2017, it takes 7 years of travel before it ends up in the Horns of Taurus (Shur, or Re'em, the wild ox) which may signify the Messiah(the Jews considered Jupiter or Zedek to be the Messiah planet) who is returning to rule and reign, and it enters the horns on July 14th.....one month later it conjuncts with Mars in the middle of the horns, and is present in the horns on Yom Kippur on 12 Oct 2024

Anonymous, on July 19, 2017 at 6:21 AM, remained hopeful the Israeli police seizure of the Al Aqsa Mosque augured well: “I meant to say that I hope we get raptured this year. If it is a Jubilee year…”

It is well worth remembering that these crazed Christian Zionists whose pro-Israel efforts Nicola and Kezia are endorsing are committed ethnic cleansers, since for them "a pre-condition of Christ's second coming is the re-establishment of the state of Israel, [and] the removal of all non-Jews from the whole of that land". But don't forget that "the fundamentalist creed also holds that only Christians will survive Armageddon. For Jews, it will be a matter of convert or perish".

They may be mad - it's surely unacceptable that Scottish political leaders endorse their work that they only carry out to get us to the 'end times', the end of the world.