Texas city to citizens: no Hurricane Harvey aid unless they promise not to boycott Israel

The city of Dickinson, Texas, is requiring applicants for Hurricane Harvey rebuilding funds to certify in writing that they will not take part in a boycott of Israel. The American Civil Liberties Union criticized the city’s condition as a violation of free speech rights. 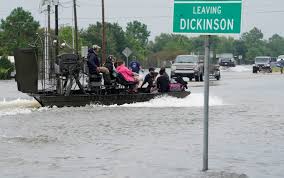 “The First Amendment protects Americans’ right to boycott, and the government cannot condition hurricane relief or any other public benefit on a commitment to refrain from protected political expression,” said ACLU of Texas Legal Director Andre Segura. “Dickinson’s requirement is an egregious violation of the First Amendment, reminiscent of McCarthy-era loyalty oaths requiring Americans to disavow membership in the Communist party and other forms of ‘subversive’ activity.”

The city appears to be enforcing a recently passed Texas law that requires all state contractors to certify that they are not participating in boycotts of Israel. While the ACLU does not take a position on boycotts of foreign countries, the organization has long supported the right to participate in political boycotts and has voiced opposition to laws and bills that infringe on the right to boycott.

The Supreme Court ruled decades ago that political boycotts are protected by the First Amendment, and other decisions have established that the government may not require individuals to sign a certification regarding their political expression in order to obtain employment, contracts, or other benefits.

On October 11, the ACLU filed a federal lawsuit challenging a Kansas law on behalf of a high school math teacher who is being required by the state to certify that she won’t boycott Israel if she wants to take part in a teacher training program.

In July, the ACLU sent a letter to members of Congress opposing a bill that would make it a felony to support certain boycotts of companies doing business in Israel and its settlements in the occupied Palestinian territories. As a result, Senate sponsors of the bill are considering changes.

US JEWISH BODY DENOUNCED NOTION OF JEWISH NATIONALITY
On this day in 1918, the Central Conference of American Rabbis passed a resolution opposing the Balfour Declaration’s premise that the Jews...