The Fight Goes On: Resisting the attack on support for Palestine

On Monday, 11th Sept, at Aberdeen Sheriff Court, Sheriff Charlotte Coutts found SPSC member Ally Coutts (no relation) guilty of ‘acting in a racially aggravated manner with intent to cause distress and alarm’ for saying ‘Viva Palestina’ when walking alone past the Jericho Dead Sea Cosmetic stall in Union Square, Aberdeen. During the course of the trial, evidence was heard from three prosecution witnesses; the stall franchise-operator (Nisan Ayalon), a Union Square security guard, and a police officer. Audio and video footage of events was also shown to the court.

When prompted by the Procurator Fiscal, both the police officer and the security guard said that their personal impression was that the incident on the day was “racially motivated”. When asked why, the police officer said he could not provide any evidence for this, other than that ‘Israel’ and ‘Israeli’ were mentioned. Even more sinister was the testimony of the security guard, who claimed to have heard Ally Coutts use the terms ‘Nazi’ and ‘babykiller’. Audio from the guard’s own chest camera subsequently shown in court proved that Ally Coutts had not in fact uttered these words. When challenged, the guard agreed that he had been mistaken. In a strange coincidence, out of all the random terms he could have misremembered, he chose ‘babykiller’ - a term also used in court by Ayalon during his testimony.

What became abundantly clear over the two days of evidence was that all of the ‘corroborated’ evidence (i.e. witnessed by more than one person, or captured on CCTV/ chest cam footage and audio) not only completely backed the defence description of what had taken place and Ally Coutt’s testimony, but also disproved some of the claims made by prosecution witnesses on the stand. For example, CCTV footage showed quite clearly that the accused did not aggressively punch the air with two fists and shout in the face of the stall operator (as claimed by Ayalon on the witness stand, under oath). Instead, Ally Coutts is seen walking past the stall, pausing briefly to raise one clenched fist, then carrying on past. Footage goes on to show Ally then being pursued by Ayalon as he walked away, aggressively attempting to force Ally out of the shopping centre.

Yet despite this, and the numerous other examples of inconsistency and false testimony from the prosecution, when it came to deciding whose version of the initial off-camera exchange between Ayalon and Ally to accept, the Sheriff chose to ‘prefer’ the former. 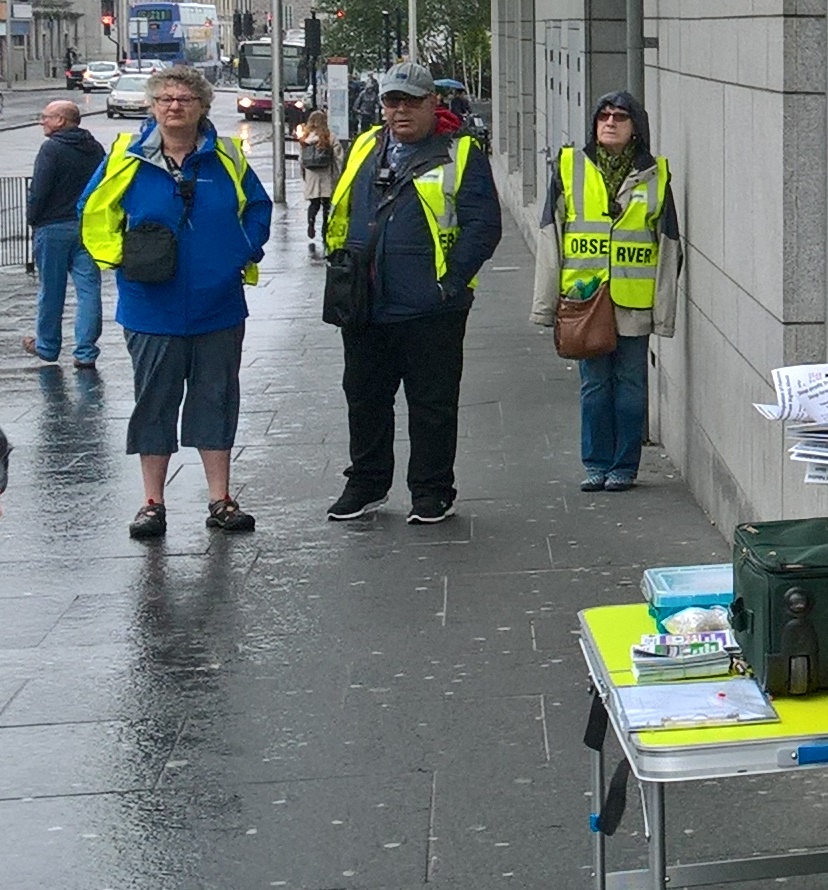 During the testimony given by Ayalon in court, much use was made of a so-called ‘investigative report’ on SPSC by pro-Israel blogger David Collier. Collier works incessantly to conflate antisemitism with criticism of the State of Israel, and both he and his work have been publically discredited on numerous occasions – something not mentioned in court. His ‘investigation’ into SPSC was commissioned by Jewish Human Rights Watch (JHRW), an extreme fringe organisation that works to criminalise criticism of Israel and legitimate BDS activity [pictured left: JHRW harassing SPSC and members of the public]. An Aberdeen member of JHRW (Debbie Taylor) was present in court for the entire trial. While Taylor’s presence was not unexpected (given her presence as a JHRW ‘observer’ at local SPSC events), what was highly unusual – and deeply concerning – was the interaction between Taylor and the Procurator Fiscal, who were witnessed disappearing into a side-room together for a discussion. Evidence of correspondence between the Scottish Crown Office and the Israel lobby obtained by SPSC has shown an unacceptable and unhealthy close relationship, and it would appear this continues.

The verdict passed down by Sheriff Coutts represents a serious miscarriage of justice. We know that the Israel lobby has been dismayed by the growing support for the Palestinian cause as the general public become more aware of the brutal reality of the plight of the Palestinians, and the extent of Israel’s violations of human rights, complete disregard of international law and outright war crimes. The JHRW came into being in 2015 as a direct response to public outrage at the 2014 massacre in Gaza during Operation Protective Edge, supposedly to monitor examples of antisemitism, but in reality to undermine BDS and Palestine solidarity activity. An important component of its strategy is to attempt to criminalise pro-Palestine activity and JHRW has previously tried and failed to secure prosecutions. They are just one of the groups working to criminalise BDS campaigning and to silence opposition to the human rights violations of the state of Israel.

The conviction passed by Sheriff Coutts in Aberdeen is being claimed as a victory by the Israel lobby. It sets a dangerous precedent, one that should set alarm bells ringing with all those who campaign for Palestinian rights, as well as those who value our rights to free speech and to protest. When such inconsistent evidence is accepted, when false statements are exposed yet glossed over, when police officers class actions as ‘racist’ simply because Israel is mentioned, when our judicial system allows itself to be lobbied and influenced by supporters of Israel’s war crimes – we will only see more such miscarriages of justice. We must challenge and resist all attempts to prevent free speech on Israel and criminalise support of Palestinian rights. Viva Palestina!