We need to discuss White supremacists rising and Palestine solidarity 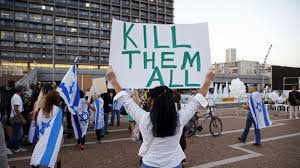 The Tory Government and the Zionist lobby are working to criminalise solidarity with Palestine (and much more). Unfortunately, the Labour and SNP leaderships are lining up with the Tories on this.

Another huge massacre of Palestinians may be coming soon, what Israeli officials call ‘mowing the lawn’ in Gaza.

Trump’s election was greeted with joy by the Israeli Government. Fear of what is being planned by the White supremacists and others in the Trump menagerie has moved millions worldwide to demonstrate against him.

We are not defeated - Zionist institutions ADL and Reut Institute are warning that, despite lavish funding and dirty tricks, the Israeli war against BDS has failed to stop the impressive growth of the movement's impact on Israel's regime of oppression.

Israel promotes and thrives on the Islamophobia that the anti-Trump demonstrators are opposing as a deadly threat to all of us. We need to explain to those in support of victimised refugees how Israel has long created refugees and ciontinues to create refugees through ethnic cleansing in the service of a state based on Jewish ethnic supremacy.

So many questions we need to discuss together. You will be welcome to join SPSC activists for a weekend of discussion in beautiful Pitlochry next weekend.

Did Trump and Netanyahu kill any lingering belief in a two-state solution as way oput of the nightmare in Israel/Plaestine?

We need to have clear aims and work out practical means to achieve them. Join an informed discussion of the heightened aggressiveness from Washington and Tel Aviv, and related issues,  in Pitlochry 10th to 12th March

Book your place at the SPSC Members Residential Weekend:

LEBANESE RESISTANCE DEFEATS ISRAELI OCCUPATION
On this day in 2000, Israel announced that it was accelerating the withdrawal of all its troops from South Lebanon. All Israeli forces had withdrawn by the...