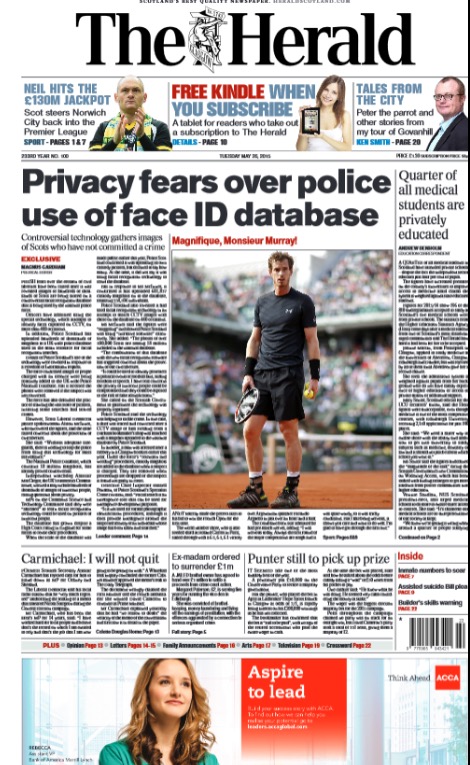 The Herald front page carried an exclusive yesterday (26 May) that Police Scotland are using ‘controversial face recognition software’ that ‘raises fresh fears over civil liberties’. The Herald article is welcome but the extent of the surveillance already being piloted in Glasgow is even more alarming than the Herald article reports; the NICE technology takes state surveillance to a whole new level. And this escalation of surveillance of citizens is being piloted in the city where Edward Snowden was elected as Rector last year of the largest university in protest at saturation surveillance of wholly innocent citizens.

When the Israeli technology known as ‘NICE’ was being deployed in Scotland’s biggest city, paid for by the UK Government, spokespersons for Glasgow City Council made three claims, two of them (1,3) demonstrably untrue and one that raises significant questions.

3. Opponents of the sinister Israeli technology were driven by ‘anti-Jewish’ malice
The smear, suggesting that opposition to a ratcheting up of state surveillance implies hostility to Jews, is itself anti-semitic.

Glasgow City Council also confirmed that the pension fund it manages on behalf of twelve local authorities and other partners, Strathclyde  Pension Fund, has investments in a majority of the twenty largest arms companies in the world. This includes Raytheon and others who supply weapons that Israel uses to periodically devastate Gaza.

What you can do:
1. Go to www.coordin8.org.uk and send a letter to your councillors

2. Learn more at a Q&A session on NICE on the streets of Glasgow, what it has done in Palestine and how it threatens civil liberties across Scotland.
NICE – what it is, how to stop the spread and get rid of it
Monday 1st June 7.30pm
Ahl Al Bayt  25 Woodside Place G3 7QL (near Charing X)
(email This email address is being protected from spambots. You need JavaScript enabled to view it. or text 0795 800 2591 to reserve a place)