The Israel-Trump school of diplomacy was on full view as US Ambassador Haley again threatened the UN as a whole, and Israeli Ambassador Danon followed Haley to snarl at those in the hall: "You are like puppets pulled by the strings of your Palestinian puppet masters...forced to dance while the Palestinian leadership looks on with glee."  Danon, the Ambassador of a state compared recently by one of its own senior generals to Germany in the 1930s, must have bemused his audience when he told them "You are blind to the light, unaware of the manipulation surrounding you." In case anyone had missed his contempt and, after all, he has a low opinion of the intelligence of all concened, he felt it necessary to repeat, "Just like a puppet". 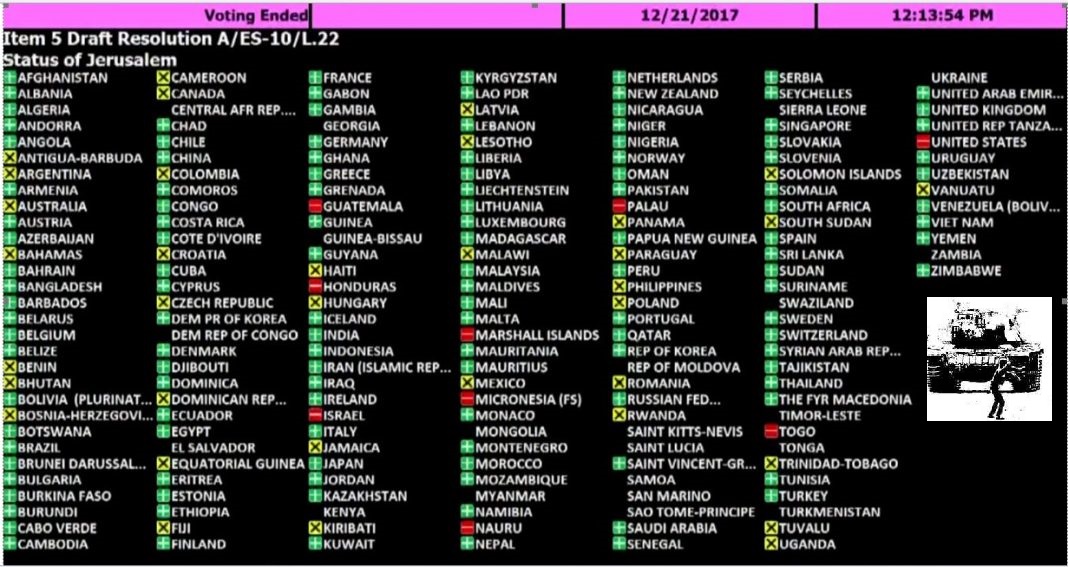 Danon was not only insulting; he seemed unhinged to a Trumpian degree as he pushed his narrative of a powerful Palestine controlling China, Russia, Brazil, Scandinavia, the UK and the rest of the world. Given such Palestinian power, it's a miracle the Zionist project still continues.

Danon condemned Palestinian ingratitude towards kind, peace-loving Israel, which cared deeply for the people of Ramallah and Gaza being manipulated by heartless Palestinian leaders.  This theme has been a constant1 of Zionist rhetoric in Palestine since the earliest days of their colonisation project.

Danon thanked those "brave countries...the defenders of real peace" who voted with Trump-Israel. There were seven: four of them are US-controlled specks in the Pacific2; Guatemala and Honduras were long run by still-influential Israeli-trained death squads committing genocidal violence against the indigenous people; Togo is a brutal hereditary dictatorship where mass upheaval several months ago forced the cancellation of an Israel-Africa summit there.

The massive condemnation of Israel and Trump today at the UN General Assembly represents a dramatic own goal for Trumpian anti-diplomacy, i.e. naked bullying and attempted humiliation of foeign countries. It will contribute to an atmosphere where more civil society institutions across Europe and the world can be won to support the Palestinian call for BDS against the Bandit State. The doors are a bit more open now - let's march through them in 2018.

1. Zionists used tio claim to never have any issue with the Palestinian Arab people, who would, they argued, welcome and benefit from the Zionist inlux. The problem was only their leaders."Arab hostility to Zionism could in this view be attributed to the reactionary interests of the effendi rather than to the bulk of the Arab population, with which Zionism was said to have no quarrel".
2. Marshall Islands, Micronesia, Nauru, Pilau.

Mick Napier
21 December 2017
West Calder
This email address is being protected from spambots. You need JavaScript enabled to view it.