The Inheritance of Abraham? A report on the 'promised land' is a ground-breaking report  by the Church and Society Council that was overwhelmingly  agreed this weekend at the annual General Assembly of the Church of Scotland in Edinburgh. In adopting the report with only a handful of votes for remitting it, the Church of Scotland rejects the use of the Hebrew Bible to “sanction…occupation of land which involved the displacement of some 750,000 people living there”. 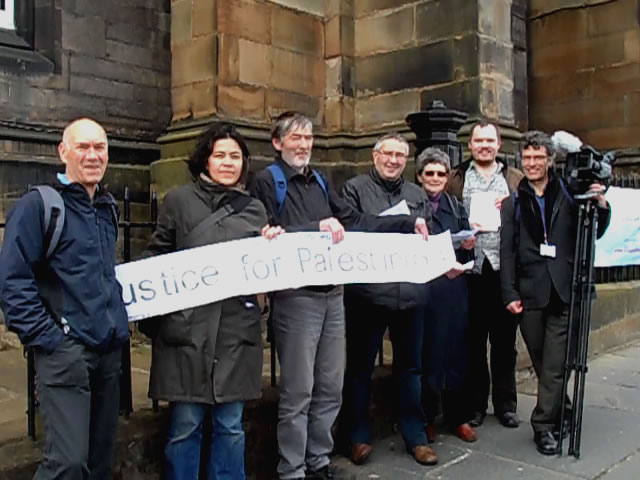 Scottish Palestine Solidarity Campaign welcomes the strong and unambiguous reaffirmation of the Church of Scotland's 2007 statement of opposition to the religious claims of Christian Zionism and advice to Church members to reject them. The national church, which is by far the largest church or religious group in Scotland, criticises Christian Zionism within a wider repudiation of European colonialism in general. The Church rejects any use of the Hebrew Bible to dispossess the Palestinian people.

The Church restates its support for Palestinian human rights, including the right of Palestinian refugees to return home or be compensated. This support is in line with Scottish and international public opinion.

The Church of Scotland's support for Palestinian human rights is strengthened by its accompanying rejection of anti-semitism as a form of racism; this parallels the stated positions of the current Scottish Government, is a core principle of SPSC and represents overwhelming public opinion.

The Church of Scotland now stands for

The General Assembly explicitly condemned the acquisition of Palestinian land “by settlement expansion, the separation barrier, house clearance, theft and force.”  The report now adopted notes how South African Church leaders during visits to ISrael/Palestine observed similarities to the concluding years of the apartheid regime in South Africa. The Church of Scotland has accepted the suggestion in the report that sanctions against Israel will be needed to force an end to Israeli human rights violations.
The report approvingly quotes Mark Braverman that "Christian people must not sell out the Palestinian people because of repentance for the Holocaust, 'sensitivity' to Jewish feelings, and fear of being labelled anti-Semitic."  They reject accusations that they are driven by anti-semitism as opposed to justice for all, including Palestinians.

The Church of Scotland now urges study of the Iona Call 2012 which notes "deepening suffering of our sisters and brothers in Palestine under occupation by Israel" and challenges the "deafening silence of most churches in the face of the continuing injustice of dispossession and denial of basic human and political rights".  The Iona Call asks Christians to participate only in pilgrimages to Israel/Palestine that encounter Palestinians and supports Palestinian "non-violent resistance to Israeli injustice and oppression".  It endorses the Palestinian call for boycott, disinvestment and sanctions (BDS) and other forms of non-violent direct action.

SCoJeC (Scottish Council of Jewish Communities) and the UK Board of Deputies had criticised the revised version of The Inheritance of Abraham? A report on the 'promised land'  and will be dismayed by this fresh evidence of public and institutional commitment to solidarity with Palestine. Their earlier response, seemingly shocked and uncharacteristically muted, claimed “the revised report still lacks balance in its approach to the Middle East conflict” and will not “advance the cause of the peace in the Middle East”.  Actually, it will.

Back-peddling furiously, SCoJeC and the BoD then claimed that they “would not presume to make comment on matters of Christian theology and did not do so.” Last week, however, Jonathan Arkush, BoD Vice President, angrily labelled the Church of Scotland report “an ignorant and tendentious document masquerading as a theological statement”.  Ephraim Borowski, Scottish Council of Jewish Communities director, who has something of a record of making unsubstantiated and downright dishonest claims of anti-semitism, called the report “biased, weak on sources, and contradictory” and called “upon the Church to withdraw it from the forthcoming general assembly… on behalf of the Jewish community of Scotland.”  Working as always to associate all Scottish Jews with the crimes of the State of Israel, Borowski claimed, against all the available evidence, that SCoJEC’s “intention was to…draw attention to the increasingly hostile contemporary experience of Jewish people in Scotland” rather than to promote the interests of a foreign state.

Further afield, the Zionist Organisation of America has called the revised Church report “despicable” and “anti-semitic”, and ZOA President Morton A. Klein insisted the Bible contains “God’s promise of the land of Israel to the Jewish people as an eternal inheritance”.

“at the recent actions of the Government of Israel in its support for settlements, for the construction of the security barrier or ‘the Wall’ within Occupied Territory, for the blockade of Gaza and for the anti-Boycott law…The Israeli settlements in East Jerusalem and the West Bank are illegal under international law. The Church of Scotland, individuals and civil organisations should urge the UK Government and the European Union as a matter of urgency to put pressure on Israel to cease from the expansion of these settlements”.

The Church now joins in the insistence of the Palestinian Kairos Declaration that “religion cannot favour or support any unjust political regime, but must rather promote justice, truth and human dignity”, and draws unambiguous conclusions.

"From this last perspective, the desire of those who seek to acquire the land of the Palestinians is wrong. The fact that the land is currently being taken by settlement expansion, the separation barrier, house clearance, theft and force makes it doubly wrong to seek biblical sanction for this."

To emphasise the point, Church policy now insists that

“Christians should not be supporting any claims by any people to an exclusive or even privileged divine right to possess particular territory. We believe that is a misuse of the Hebrew Bible (the Christian Old Testament) and the New Testament to use it as a topographic guide to settle contemporary conflicts over land”.

The authors of the report had asked rhetorically whether the Hebrew Bible could “really sanction…occupation of land which involved the displacement of some 750,000 people already living there, and the present injustices and humanitarian issues we see today”.

According to the Church, the “human rights of all peoples should be respected, and this should include the right of return and/or compensation for Palestinian refugees”.

By adopting The Inheritance of Abraham the Church of Scotland now endorses the “criticism of Christian Zionism” presented in the Kairos Declaration in the name of every Christian denomination in Palestine and encourages "members of the Church of Scotland to reject it”. The report saw as “repugnant” the notion from an earlier era of “European colonialism…that a land was ‘empty’ if western power and culture was not present,” and repudiated claims that the Christian/Jewish Bible confers any exclusive rights to Palestine or any other real estate. An emerging consensus among scholars was cited to support the rejection of the Zionist narrative; the report had noted that “lack of detailed archaeological evidence supports the view that the range of scriptural material makes it inappropriate to try to use the Hebrew scripture to determine an area of land meant exclusively for the Jewish people”.

Anticipating the automatic Zionist response, the report authors “strongly reject accusations of anti-Semitic bias” for their support for Palestinian human and national rights when “the current situation in Israel and the Occupied Palestinian Territory is characterised by an inequality in power [and] liberal-democratic values have been violated in immigration, citizenship, education, economic, and most of all in land policies”.

The report notes the relevance of the apartheid label to Israel and suggests that BDS – boycott, divestment and sanctions – will be needed to force Israel to comply with international and humanitarian law:

"Church leaders from South Africa, following a visit to Israel and the Occupied Palestinian Territory in the autumn of 2012, observed similarities to the concluding years of the apartheid regime in South Africa…it is challenging that those who remember the reality of apartheid first hand and the consequences of international campaigns on their own nation concur with proposals to consider economic and political measures involving boycotts, disinvestment and sanctions against the state of Israel focused on illegal settlements, as the best way of convincing Israeli politicians and voters that what is happening is wrong."

Despite intense pressure from Zionist sources in Scotland and abroad to abandon the main elements of their report, the Church of Scotland Church and Society Council is to be congratulated on their support for Palestinian human and national rights, their principled stand for justice, their readiness to name Israeli human right violations and their call for effective action at every level of society to remedy the gross imbalance in power in the struggle between apartheid Israel and the Palestinian people struggling for freedom.

Mick Napier
23 May 2013
This email address is being protected from spambots. You need JavaScript enabled to view it.