The racist, anti-Palestinian materials came to light after Aliyah Shafiq, the sister of a P7 pupil at New Stevenston primary, asked on her Facebook alongside a copy of her sister's homework: "How is my little sister being made to answer questions like this for her homework? This is completely unacceptable and has to be complained about to North Lanarkshire Council."

Anti-Palestinian racism has gone unchecked for too long. SPSC reported some considerable time ago how an Edinburgh University academic, Esti Sheinberg, had written unchallenged in the Edinburgh Star, ‘Journal of the Edinburgh Jewish Community’, that "The Jewish passion for Jerusalem is to rebuild and live in it. The Palestinian passion is for blood." It cannot be allowed to continue. 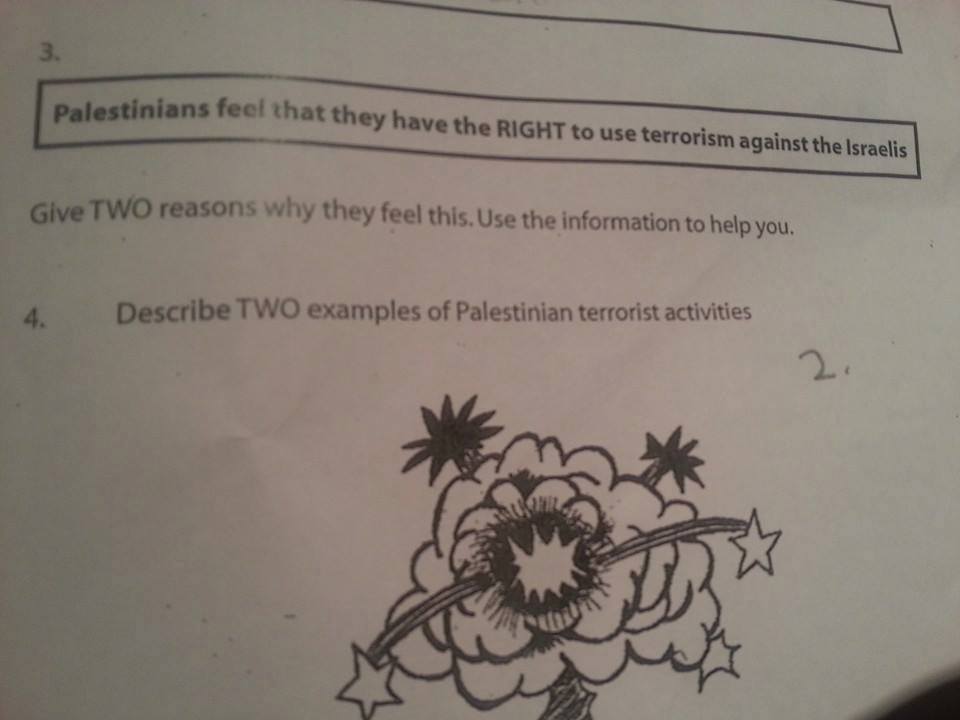 The letter below is posted on ww.coordin8.org.uk to make it quick and easy to email each of your local councillors with a single letter concerning the material demonising Palestinians that has been used in at least one Scottish schoolroom and possibly many more. One page of the racist materials is below.

I and many of my family, friends and acquaintances are disgusted by the racist materials demonising all Palestinians that are being used in at least one North Lanarkshire primary schoolroom and possibly more across Scotland.

I am writing to demand that these and similar materials be withdrawn forthwith and a full and transparent enquiry be launched into how this situation came about, the extent to which similar materials are being used elsewhere, and what safeguards can be put in place to ensure nothing like it is repeated.

I ask you to endorse the spirit and content of the following press release from the Association of Palestinian Community in Scotland and let them know your stance on this issue.  Dr Essam Hijjawi, Chair, can be contacted by email (This email address is being protected from spambots. You need JavaScript enabled to view it.).

PRESS RELEASE
The Association of Palestinian Community in Scotland today condemned inflammatory teaching materials given to young children in a North Lanarkshire school which seeks to demonise Palestinians.

Children as young as 11 at New Stevenson Primary School, were given homework which described Palestine as Israel, and labelled all Palestinians seeking to end the occupation as "separatist terrorists".

Pupils were asked if "Palestinians feel they have the RIGHT to use terrorism against the Israeli."

Dr Essam Hijjawi, chair of the Association of Palestinian Community in Scotland said:
"'The Separatists' case study given to children as homework demonstrates a fundamentally flawed reading of history and geography, flying in the face of countless UN resolutions and shows an ignorance which beggars belief.

"In July and August of last year, more than 500 Palestinian children were killed by the Israeli Occupation Forces and schools were razed to the ground by bombing raids and missile attacks.

"Unlike the children of Israeli settlers, Palestinian children are subject to military law. This means they can be detained without the knowledge of their parents, detained and held in adult prisons without charge and appear before military courts.

"Children in North Lanarkshire should not be taught to demonise Palestinians, they should be learning how children of the same age are beaten and shot by Israeli soldiers.

"We call for the immediate withdrawal of all such materials from Scottish schools, a public apology to the Palestinian community in Scotland, and a meeting with education department officials in North Lanarkshire, with the leader of the Council and with Scotland's Minister for Education.

"We also ask that all materials used in schools relating to the teaching of the history of Palestine is discussed between Education Scotland and the Palestinian community.

"At a time when Muslims are being demonised for the actions of a tiny minority, our children need to gain a proper understanding of the occupation of Palestine and learn compassion rather than fear and hatred."

I look forward to your response.