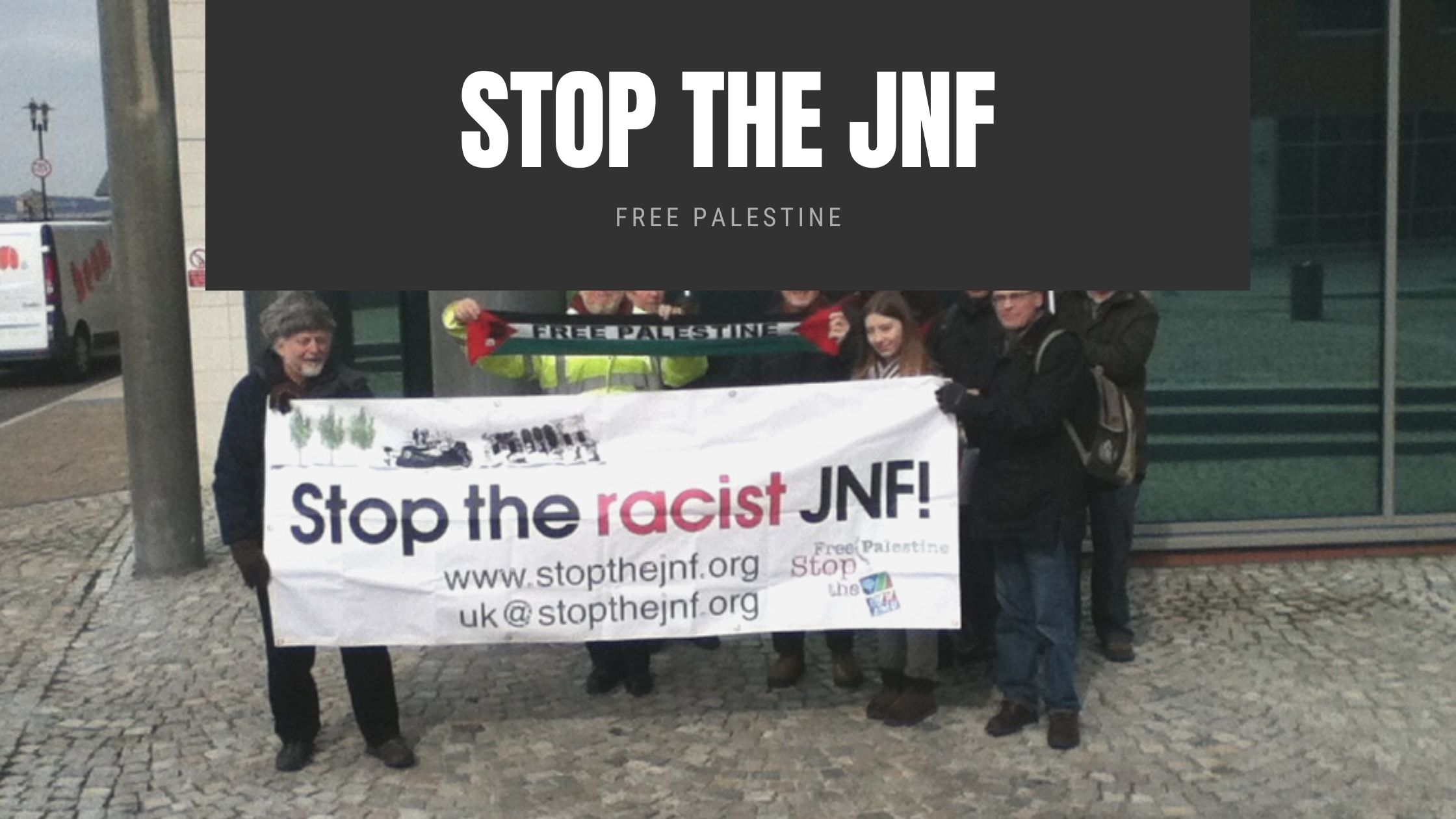 An international campaign aimed at ending the role of the Jewish National Fund (Keren Kayemet LeIsrael) (JNF-KKL) in:

The JNF continues to serve as a global fundraiser for Israeli ethnic cleansing, occupation and apartheid. Despite its role in a State institution of Israel (the Israel Land Authority) and in institutionalized racism and apartheid, the JNF and its affiliate organizations enjoy charitable status in over 50 countries and many also enjoy consultative status with the United Nations.

The first meeting to build the Stop the JNF campaign was held in Geneva in May 2009, during the World Conference Against Racism/Durban Review and the shadow Israel Review Conference. Plans to build the campaign were started at this meeting with the Habitat International Coalition (HIC), the International Jewish Anti-Zionist Network (IJAN), the Palestinian Boycott, Divestment and Sanctions National Committee (BNC), the Scottish Palestine Solidarity Campaign (SPSC).

In May, 2010, these organizations co-sponsored an organizing meeting in Edinburgh, Scotland, for activists and lawyers who were already building campaigns against the JNF in their regions. The goal of the meeting was the development and international coordination of campaigns against the Jewish National Fund (JNF).

SPSC taking on the racist JNF since 2001

The racist JNF is a fundamental pillar of the Israeli apartheid system, current Honorary Patrons - Tony Blair and Gordon Brown.
Every Scottish JNF (Jewish National Fund) public event was protested between 2001 and 2014, after which the JNF ended pre-publicity for their events.

Following the 2004 protests Ruby Wax pulled out of the Israeli Independence Day events in London a month later. Zionist Federation President conceded, "Miss Wax had a bad experience at a JNF function and after that she was thinking of pulling out."

In 2006, hundreds protested the JNF fundraiser at Glasgow Hilton with guest speaker Colin Powell. Sadly, despite emails to UK Palestine groups and individuals and months of lead-in time to organise, the JNF event in London with war criminal Powell was virtually ignored, only Friends of Al Aqsa mobilising about 30-40 protestors. Significant UK-wide protests against the JNF developed later.

Following discussions in Geneva in May 2009, Habitat International Coalition (HIC), IJAN (the International Jewish Anti-Zionist Network and SPSC issued a public call to set up the Stop the JNF. These three were joined by the Palestinian BNC, BADIL (Palestinian Refugee Rights Centre) for a two-day conference one year later in St Georges West, Edinburgh to launch Stop the JNF. The STUC, Green Party and scores of MPs then endorsed the new organisation.

In 2011 an unprecedented final tally of 68 Westminster MPs shocked the JNF by signing Jeremy Corbyn's and Gerald Kaufman’s EDM 1677 welcoming the joint work of “Palestinian Boycott National Committee, the International Jewish Anti-Zionist Network, Scottish Palestine Solidarity Campaign” in launching Stop the JNF Campaign, David Cameron resigned as a Patron of the increasingly toxic JNF, and Nick Clegg and Ed Miliband also broke with tradition by not signing up as JNF patrons after becoming mainstream party leaders.