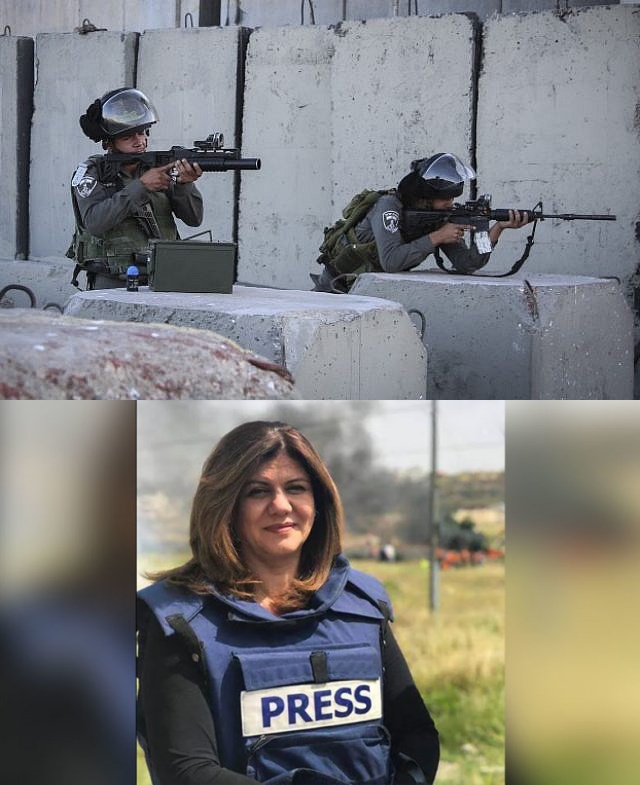 "Of course, the real heroes are the journalists on the ground covering the persecution of Palestinians and the brutal Israeli occupation of their land. As we've seen countless times, reporting in that part of the world makes you an Israeli military target, and soldiers seem to be able to shoot at TV news crews and media with impunity. The latest victim was Al Jazeera's veteran journalist Shireen Abu Akleh, who was slain by an Israeli sniper as she covered an army raid on the Jenin refugee camp in May."

When did telling the truth become a revolutionary act that could cost you your life or liberty?

Setting out as a cub reporter back in the 1970s, being a member of the Fourth Estate was something to be proud of and certainly nothing to fear from informing and educating readers.

Only journalists who lived and worked in brutal regimes, dictatorships, and military juntas had anything to fear.

I remember as a Branch Secretary of the National Union of Journalists (NUJ) penning a letter to Pakistan General Muhammad Zia-ul-Haq demanding he releases four journalists, who were sentenced to public floggings and imprisonment in 1978, during his dictatorial regime after the introduction of martial law.

What happened to Masood Ullah Khan, Nasir Zaidi, Khawar Nasim Hashmi, and lqbal Jaffery - each given 10 lashes - at a military court back in 1978 was the worst conviction ever given to journalists around the world.

Sadly, today the punishments for those who hold truth to power, have worsened in many ways with journalists being arrested and tortured, detained without charge, disappeared, or even murdered in plain sight.

Life for journalists in Pakistan has not improved. Just this week top journalist Imran Riaz Khan, a critic of the newly installed government, was arrested in a large police operation as he drove to Islamabad from Peshawar. They seized his mobile phone among other items and would have remained silent on the arrest if the footage had not surfaced. Former Prime Minister and cricketer Imran Khan condemned the arrest saying Pakistan was "descending into fascism."

But life for journalists is not just difficult in Pakistan. In Britain, for instance, the moment Home Secretary Priti Patel signed the extradition order to send Julian Assange to America to face charges under the Espionage Act, she made it even easier for rogue states around the world to kill or forcibly disappear courageous journalists who expose government lies and treachery.

Assange's alleged offence was merely, to tell the truth without fear or favour. If the freedom of speech cannot be protected in Britain where we claim to value it so much, then what hope is there for those in other countries?

When shocking state secrets come our way as journalists, it is our duty to make them public. WikiLeaks founder Assange published a treasure trove of US government documents in 2010, including confidential US military records and diplomatic cables, that exposed wrongdoing and, arguably, state-sanctioned murder.

Any self-respecting journalist in possession of such an embarrassment of exclusives would have done the same as Assange had they been in his position.

To be brutally frank, some journalists went on to make their names on the back of the sensational WikiLeaks material but, unaccountably, they are now shy to stand up in defence of the likes of Assange and the right to freedom of speech that he has so readily defended.

Author and journalist Patrick Coburn recently said that some such journalists are too afraid to defend Assange because of state bullying and intimidation. If so-called bastions of democracy like America and Britain set out so obviously to intimidate journalists, then what chance do those reporters who live and work under brutal regimes, dictatorships, and rogue states?

When US President Joe Biden’s administration placed the Israeli spyware maker NSO Group on a US blacklist after the company's signature Pegasus spyware was deployed by foreign governments against dissidents, journalists, diplomats, and members of the clergy, this was viewed in a favourable light. However, since the US is still intent on demanding Assange's extradition we can see that hypocrisy is also flourishing in Washington.

Journalists are a thorn in the side of politicians and governments, but that is our role.

Sometimes the mainstream media forgets our job is to hold to account people in power and to inform and educate the general public about what is being done in their name or on their behalf.

The fact that the Israeli NSO Group has clients across the Middle East, including Saudi Arabia and the UAE, as well as Hungary and India, speaks volumes about paranoia in those states.

Saudi journalists will undoubtedly think twice before exposing or criticising the activities of Crown Prince Mohammed Bin Salman who, according to US intelligence agencies in a report declassified by US President Joe Biden, ordered the murder of Washington Post journalist Jamal Khashoggi in the Saudi Consulate in Istanbul in October 2018.

Now that strategic alliances are changing on board the fickle merry-go-round of world politics, Biden is heading out next week to Saudi Arabia to persuade MBS - the de facto ruler - to pump more oil to replace Russian exports and bring down the price.

Biden, you may recall, began his presidency by refusing to pick up the phone to speak to Bin Salman. Moreover, Turkey's ever pragmatic President Recep Tayyip Erdogan is new best friends with the Saudi prince. So much so, in fact, that the trial in absentia of the 26 alleged murderers of Khashoggi is being transferred from Ankara to Riyadh. I doubt now if justice will ever be delivered to Khashoggi’s fiancee Hatice Cengiz.

Journalists are having to operate in a world where they face being smeared and discredited, undermined, and ridiculed for daring to stand up to governments. I should know. Ever since I handed over leaked GCHQ papers exposing treachery by US spy agency the NSA, 20 years ago, there have been various attempts to ridicule, sideline, and undermine my work. My journalistic status and credibility have been called into question on many occasions.

I would feel so much better about it all if the US and Britain had been held to account over allegations of illegal spying on members of the UN Security Council during the run-up to the 2003 Iraq invasion and war, but all we got was a timely reminder in the 2019 film Official Secrets of Tony Blair's treachery when he was Britain's Prime Minister.

Of course, the real heroes are the journalists on the ground covering the persecution of Palestinians and the brutal Israeli occupation of their land. As we've seen countless times, reporting in that part of the world makes you an Israeli military target, and soldiers seem to be able to shoot at TV news crews and media with impunity. The latest victim was Al Jazeera's veteran journalist Shireen Abu Akleh, who was slain by an Israeli sniper as she covered an army raid on the Jenin refugee camp in May.

Meanwhile, a report by the Committee to Protect Journalists says that the number of reporters jailed around the world reached a grim new record in 2021. Editorial Director Arlene Getz wrote: "It's been an especially bleak year for defenders of press freedom. CPJ's 2021 prison census found that the number of reporters jailed for their work hit a new global record of 293, up from a revised total of 280 in 2020. At least 24 journalists were killed because of their coverage so far this year; 18 others died in circumstances too murky to determine whether they were specific targets."

The bitter reality is that if we can't get justice for Assange, the murder of Khashoggi, or the assassination of Abu Akleh, then why should any rogue states fear backlashes in the future if they trample on the human rights of journalists and those in their networks?

Good journalists are the watchdogs of freedom and democracy. You don't have to like us, but at least if you see us at work you should know that we are operating in a sector where the truth still matters.

Making journalism a crime exposes a weak state in the grip of powerful people who have much to hide, and who fear the truth.

To mark World Press Freedom Day in May, Reporters Without Borders published the 2022 edition of the World Press Freedom Index which ranked America at 42 in the league table of 180 nations; Britain scraped in at 24 and yet both countries often boast about their democratic credentials.

However, their respective positions on this list show that they will persecute journalists in a bid to silence or target them.

It’s an inconvenient fact but be warned: reporting the truth could cost you your liberty or even your life in the 21st century.

*Yvonne Ridley is a member of the National Union of Journalists, the IFJ and a Co-founder of Women in Journalism (WIJ). She has an honorary doctorate in journalism from the International Academy of Diplomatic Action in Berne, Switzerland