Why don't Corbyn’s critics attack him for EDM 1677? 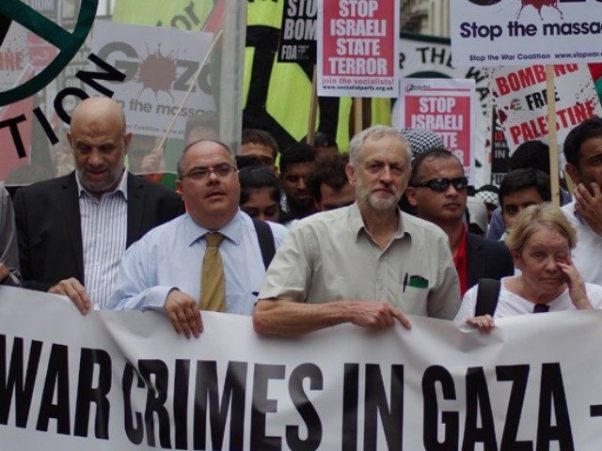 A huge variety of approaches have been taken by the Labour right, Tories, and the pro-Israel groups to smear Corbyn as hostile to Jews. They have scoured social media posts for many years and attendances at small meetings in countless community centres for anything to throw at Corbyn. Why, therefore, have the pro-war, pro-Israel groups stayed well clear of EDM 1677, a motion in the name of Jeremy Corbyn to the Westminster Parliament critical of the Jewish National Fund. The motion was seconded by Gerald Kaufman MP and supported by 66 of their colleagues in the House of Commons.

That this House welcomes the Stop the Jewish National Fund (JNF) Campaign launched on 30 March 2011 by the Palestinian Boycott National Committee, the International Jewish Anti-Zionist Network, Scottish Palestine Solidarity Campaign and others to inform the public about the JNF - Karen Kayemet L'Yisrael, its ongoing illegal expropriation of Palestinian land, concealing of destroyed Palestinian villages beneath parks and forests, and prevention of refugees from returning to their homes; notes that the JNF's constitution is explicitly discriminatory by stating that land and property will never be rented, leased or sold to non-Jews; further notes that the UN rejected the JNF USA's application for consultative status with the Economic and Social Council on the ground that it violates the principles of the UN Charter on Human Rights; regrets that the Prime Minister is a JNF honorary patron; and believes that there is just cause to consider revocation of the JNF's charitable status in the UK.
EDM 1677 tabled on March 30th, 2011

Corbyn’s political enemies are now smearing him as a chronic, committed anti-Jewish politician that all decent people must shun. One of his crimes is to refuse to endorse the bogus IHRA definition, which claims that “manifestations of antisemitism are directed toward…Jewish community institutions.” Given the absurdity of many of the accusations levelled at Corbyn, why haven’t they claimed that he attacked a “Jewish institution” and is thus, according to the IHRA definition, an antisemite?

Those mounting the campaign against Corbyn are certainly aware of EDM 1677; almost exactly two months after Corbyn launched EDM 1677, David Cameron resigned as a JNF Honorary Patron, the first time in its 118 year history the serving British Prime Minister did not hold this position. For Samuel Hayek, JNF UK Chairman, the decision was “disappointing” given “the obvious pressure he came under to do so from anti-Israel activists.” Unprecedentedly, Ed Miliband and Nick Clegg declined the JNF’s request to become Patrons when they became leaders of Labour and Lib Dems.The JNF went into overdrive damage limitation mode, and their CEO, David Goodman, wrote to all 68 MPs who signed EDM 1677, asking to meet individually with any who would agree to meet. (Goodman wrote to the MPs that the writer of this piece justified child murder, and was linked to neo-Nazis via David Duke of the KKK and Israel Shahak, Head of the Israeli League for Human and Civil Rights!)

Corbyn’s attackers have resisted the temptation to use EDM 1677 because of the racist practice of the JNF that Corbyn’s motion accurately described. In addition, the seconder was veteran Jewish MP, Gerald Kaufman.

Although it masquerades as a Jewish community charity, the JNF is actually a para-statal arm of the Israeli Government and a pillar of Israeli residential segregation. The JNF owns outright about 14% of the land surface of 1948-67 Israel. The Government delegates to JNF control most of the remaining land in Israel to maintain the exclusion of Palestinian citizens from benefitting from that land. The Israeli Embassy and its allies would prefer that the JNF not become the object of public interest while the bogus charity gets on with its dirty work, (supplemented by financial support from unknowing UK taxpayers).

Attacking Corbyn by using EDM 1677 also carries the danger that it could remind many of the motion’s co-sponsor, Gerald Kaufman, and possibly his moving speech in the House of Commons towards the end of Israel’s slaughter of Palestinians in Gaza over Christmas and New Year 2008/9.

Kaufman opened by alluding to his Zionist upbringing, the JNF, and then compared Israel’s ongoing mass killing of Palestinians to the behaviour of the Nazis who exterminated many of his family. He dared to find a common humanity in Jewish and Palestinian grandmothers murdered by a brutal soldiery. As the number of Palestinians slaughtered rose to its final score of 1,400, Kaufman rose to speak:

My parents came to Britain as refugees from Poland. Most of their families were subsequently murdered by the Nazis in the holocaust. My grandmother was ill in bed when the Nazis came to her home town of Staszów. A German soldier shot her dead in her bed. My grandmother did not die to provide cover for Israeli soldiers murdering Palestinian grandmothers in Gaza.

Kaufman didn’t stop there; he denounced the racist devaluing of Palestinian lives and also the Israeli Government’s exploitation of the Nazi Holocaust to win support or neutralise opposition to Israel’s massacres of Palestinians:

The current Israeli Government ruthlessly and cynically exploit the continuing guilt among gentiles over the slaughter of Jews in the holocaust as justification for their murder of Palestinians. The implication is that Jewish lives are precious, but the lives of Palestinians do not count.

In case anyone missed the comparison, Kaufman added:

The spokeswoman for the Israeli army, Major Leibovich, was asked about the Israeli killing of, at that time, 800 Palestinians. The total is now 1,000. She replied instantly that “500 of them were militants”. That was the reply of a Nazi. I suppose the Jews fighting for their lives in the Warsaw ghetto could have been dismissed as militants.

Corbyn launched EDM 1677 to attack a charity with the word “Jewish” in its name but for his critics raising the matter would carry risks of a perfect storm that would challenge exactly the two parts of the IHRA definition of antisemitism that the Labour Aprty so far balks at accepting.

An examination of the JNF would show conclusively that the State of Israel is indeed a racist endeavour. (Tony Blair’s involvement should arouse suspicions.)

Gerald Kaufman’s comparisons of Israeli savagery and official discourse to that of the Nazis is legitimate and necessary and was made movingly and authoritatively by a Jewish Labour MP.

The answer to the question contained in the title is: because Corbyn's critics are afraid to go there.