In response to a motion in the name of Sandra White (72nd Anniversary of the Nakba) that acknowledges the ethnic cleansing of the Palestinian people, Richard Lyle MSP has moved an amendment that peddles discredited Nakba denial revisionist history to conclude that this crime was “sadly a self-inflicted tragedy”. 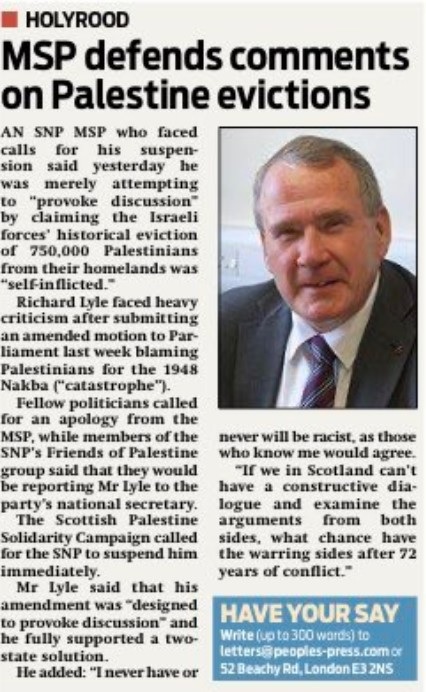 So far, Lyle’s amendment is only supported by two Tory MSPs - Adam Tomkins and Jeremy Balfour; the latter is in a line of political descent from the author of the Palestinian Nakba, but possibly not a biological one.

The composition of Israel’s attack squad in the Scottish Government should make advocates of Palestinian freedom feel confident; the 'three amigos' are a toxic mix of general bigotry, attacks on benefit claimants and rape victims, general nuttiness, and open support for Israeli war crimes.

Following a wave of criticism, Lyle responded that he was acting on behalf of the ‘Building Bridges with Israel’ group in the Parliament to stimulate a conversation, suggesting it might be acceptable to initiate a discussion in the Scottish Parliament by saying, in the traditions of the extreme right, that the fate of Jews, homosexuals, Poles, Russians and Serbs at the hands of the Nazis in WWII was “self-inflicted”. Such excusing, diminishing or denying of undeniable atrocities is nothing more than an oblique attempt to justify them, as his pro-Israel group routinely justifies every Israeli crime against the Palestinian people.

Who will initiate a discussion in Holrood with a motion that the victims of the Highland clearances brought their fate on themselves?

The historical truth of the Zionist expulsions of native Palestinians can only be denied by a rogue or a fool. An accomplished Israeli historian, Benny Morris, is difficult for the pro-Israel crowd to challenge; he researched and revealed the massacres, rapes, and terror that the Zionist Gangs used to expel their Palestinian victims. Morris, however, feels no need for hypocrisy,  is untainted by any sense of guilt, and has expressed his regrets that the ethnic cleansing was not completed and that some Palestinians remained in Palestine after 1948.

Lyle’s ignorance – or duplicity, it’s difficult to tell – includes peddling the long discredited Zionist myth, for which there is not a shred of evidence, that Palestinians left their homeland voluntarily at the behest of Arabic radio broadcasts to facilitate the ethnic cleansing of Zionist Jews.

Lyle is Acting Convenor of the Scottish Parliament Cross-Party Group on Building Bridges with Israel, which operates on behalf of the Israeli Embassy. Almost all the group’s MSPs are Tories, plus one Labour, one LibDem, with Lyle and John Mason for the SNP. The affiliates include Glasgow Friends of Israel, whose Facebook has welcomed the “euthanizing” of Palestinians and hosted an exchange of views between members welcoming the White supremacist mass murder of Muslims in Christchurch mosque in New Zealand last year.

Lyle’s amendment nonetheless breaks new ground, building upon the Scottish Government’s adoption of the IHRA definition of anti-semitism, which smears those who acknowledge Israel’s state-enforced racism as anti-semites. Lyle now re-writes history to absolve the perpetrators of the ethnic cleansing of 1948 of all responsibility. Having erected a defence of the crime and the criminals, Lyle and his Tory allies now attack the victims of that crime. By blaming the refugees for the Zionist gangs violent expulsion of their families and communities from their homes and homeland, Lyle shows the pro-Israel lobby will allow no end, no limit to their attacks on Palestinians and their supporters but that it will continue until this McCarthyism is defied, fought and defeated.

With Tories, Labour and SNP now in agreement that opponents of Israeli state-enforced racism are racists, Lyle is now going a step further to confirm the normalisation of anti-Palestinian racism. To understand how loathsome are Lyle’s claims, simply replace the words “Palestinians” with “Jews” or “Native Americans” and then claim, as some extreme racists do, that it was actually the victims of racist mass killings who brought about “a self-inflicted tragedy”. Who can doubt that any party member speaking so of Jews or other victims of racist mass murder and ethnic cleansing would be suspended immediately, but it seems that antennae that detect racism in criticisms of the State of Israel are indifferent to Lyle’s extreme form of anti-Palestinian racism.

If the Scottish Government’s hate crime bill fails to include Lyle’s racism and his defence of Israeli war crimes and crimes against humanity then it will begin with a serious legitimacy deficit.

Just as some deny the Nazi Holocaust because they dream of repeating it, those like Lyle who deny the Palestinian Catastrophe (‘Nakba’) are applauding those in the Israeli Government who are continuing to drive out Palestinians and place their property under rules that it must benefit only Jews and not Palestinians.

Palestinians suffer state-enforced racism, the defence of which is now openly stalking the corridors of the Scottish Parliament.