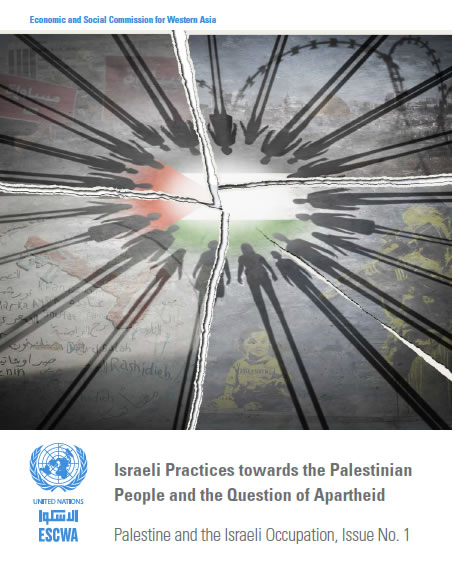 BREAKING: New UN Report
Israeli Practices towards the Palestinian People and the Question of Apartheid -  an evaluation of Israel’s practices against the 1973 International Convention on the Suppression and Punishment of the Crime of Apartheid and other key human rights laws

Richard Falk, co-author of this UN report starts a speaking tour of Scotland - details below.
Confirm your attendance on our Eventbrite page: https://www.eventbrite.co.uk/o/scottish-palestine-solidarity-campaign-8444581160

Published by the UN’s Economic and Social Commission for Western Asia (ESCWA), the report concludes that “Israel has established an apartheid regime that dominates the Palestinian people as a whole.” The UN report avoids comparisons between Israel and South African apartheid but examines how Israeli practices measure up against the legal definitions of apartheid as a crime against humanity and finds “beyond a reasonable doubt that Israel is guilty of policies and practices that constitute the crimes of apartheid” as defined in international law.

My grandfather lost our 30-acre property on the shores of Haifa in 1948 by the military invasion. It is impossible for me, as a grandson, to claim my right of this property. However, any Jew, or someone claiming to be a Jew, will be immediately welcomed by the occupying state and given citizenship, home and social support. There are millions of Palestinians around the world who are in the same situation as I and don't have those rights, nor right of return.

The UN Report urges national governments to “support boycott, divestment and sanctions activities and respond positively to calls for such initiatives.” 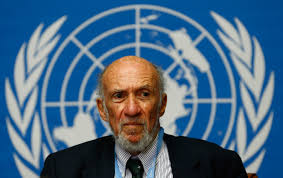 When he arrived in Tel Aviv airport leading an official UN delegation, Richard Falk was detained and expelled by Israel, who refused him entry to Palestine to gather data first hand. He nonetheless reported back to the United Nations in 2008 that "Israel maintains its Gaza siege in its full fury, allowing only barely enough food and fuel to enter to stave off mass famine and disease." He asked the UN to evaluate whether "Israeli civilian leaders and military commanders responsible for the Gaza siege should be indicted and prosecuted for violations of international criminal law". On December 27 that year Falk condemned Israel strikes on Gaza as "war crimes", collective punishment, and targetting of civilians. Falk was bitterly attacked by the US, Israel and the UK Governments for his findings. The murderous siege of Gaza continues in "in its full fury". Falk supports the Palestinian call for BDS (Boycott, Divestment and Sanctions) against Israel until it concedes Palestinian rights.

Today we are witnessing a concerted attack on free speech for Palestine as supposedly "anti-semitic", an evidence-free claim.

The attack is launched by a UK Government that supports every Israeli massacre of Palestinians, and is supported by pro-Israel groups who also endorse every Israeli massacre of Palestinians. A letter from Minister for Universities Jo Johnson to all UK universities attacks Israeli Apartheid Week events and proposes a definition of antisemitism that would criminalise opposition to the crimes of the State of Israel. Universities in England have cancelled academic conferences on Israel-Palestine, and some have put pro-Palestine campus meetings under special measures - police in attendance, audiences restricted, requests for officials to check the content of talks beforehand. In Edinburgh, the City Chambers booking for Richard Falk to speak was cancelled because the topic was "controversial".

Falk sees himself as "an American Jew", which for him signifies above all, "to be preoccupied with overcoming injustice and thirsting for justice in the world, and that means being respectful toward other peoples regardless of their nationality or religion, and empathetic in the face of human suffering..."

Support these meetings with Richard Falk to:

Confirm your attendance on our Eventbrite page