Scottish people adhere to many religions, including Golf. Devotees of Golf notoriously practice their rituals outdoors in all weathers, since they don't have much choice given Scotland's year-round rain. Anger at Israeli crimes against the people of Palestine is rising, in particular at the role played by the JNF in the ethnic cleansing of Palestine.
On Tuesday 21st June, the longest day of summer, following sizeable and vociferous protests at the JNF fundraiser at Bonnyton Golf club outside Eaglesham village, the JNF organisers announced the cancellation of the events 'due to rain'. Obviously hardier than the golfers, the protestors moved to the clubhouse gates to give the fundraisers a send-off in the light rain.

Eighty peaceful but noisy protesters assembled outside the village of Eaglesham on a weekday in light-to-heavy rain.  The protesters outnumbered the JNF supporters and golfers, some of whom complained to the police that demonstrators were 'allowed' to demonstrate in such large numbers and so vociferously at the first hole while they were trying to putt.

Huge banners and massive flags were clearly visible from the clubhouse, all the way down the fairway to the first hole, 'JNF = Ethnic Cleansing', a huge one reading 'End Israeli War Crimes', and others stating the undeniable truth that the  'JNF Funds Apartheid'. The largest flag in Scotland, a Palestinian flag, was strung from tress behind the protestors and was visible from afar.

Each of the ten teams that came by before lunch was told about the JNF's crimes, since some of the participants may have been unaware of the family evictions, house demolitions, destruction of farming communities, and other JNF-financed and JNF-executed criminality.

Participants were asked to reflect on why David Cameron, Ed Miliband and Nick Clegg had declined to become Honorary Patrons of this racist charity where their predecessors had invariably agreed to be one; the answer was suggested that the truth about the JNF was beginning to be known to the public and that defence of the JNF, once the truth was out, was indefensible. Cameron, Miliband and Clegg know that the JNF is fast becoming a toxic brand.

The professional golfers were each identified while putting on the first hole and notified that they would each be added to a Scottish Golf 'Hall of Shame' with implications for their future career when word gets out about their prostituting their skills in the service of ethnic cleansing.

At about 12.30, a group of golfers played the first hole to very determined hostility to ethnic cleansing, then turned back down the fairway to the clubhouse.  At that time it was barely raining at all; that was the last golfing of the day.  They then broke for lunch and did not to resume the tournament.

The JNF stopped its annual fund-raising bash at the Glasgow Hilton three years ago.  Each of those events had attracted hundreds of protestors.  The only other significant public fund-raiser the JNF have been attempting is the Bonnyton Pro-Am Golf game, picketed every year by Scottish Palestine Solidarity Campaign (SPSC) and other supporters of Palestinian human rights.  The day-long demonstrations have led to a decline in the number of participating golfers: 32 teams took part in 2010 compared to 49 the year before.  After yesterday's demonstrations, with rising anger at the role the JNF plays in Israel/Palestine, the future of this and other JNF public events must be in serious doubt.

The Stop the JNF Campaign and Scottish PSC urge that every JNF publicity and fund-raising event, wherever it is held, should be opposed - by letter-writing and publicity campaigns, as well as public protests at each event. 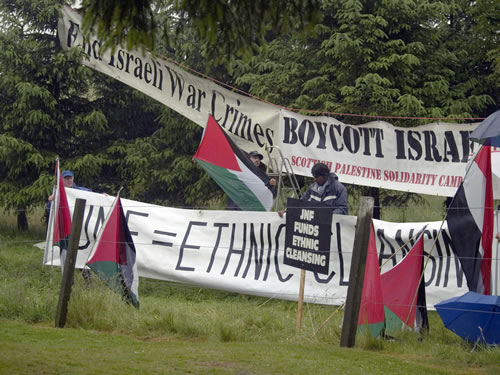 The role of the JNF is naked and brutal today, and always has been.  In the words of one of their key figures, Josepf Weitz, JNF Director of Land and Afforestation, what was said for outside consumption was very different from what was clear to the ethnic cleansers going about their grim business:
"Between ourselves it must be clear that there is no room for both peoples together in this country. We shall not achieve our goal if the Arabs are in this small country. There is no other way than to transfer the Arabs from here to neighbouring countries - all of them. Not one village, not one tribe should be left."

Join SPSC to make sure Scotland is not a place to fund-raise for ethnic cleansing. You will make a difference.  Support the Stop the JNF Campaign in the UK and internationally as one of the best possible ways to support the Palestinian people, i.e. to campaign against one of the principal agents of their dispossession.

More information on the JNF:  www.stopthejnf.org

Alice Bentley 2 months ago Bannockburn of all places the site of a shameful surrender
It is hardly surprising that a child, in a short written piece, will fail to cover all the sides of a human conflict. Rather than remove the piece, far better to display a response , or a contextual piece, putting an Israeli view, or alternative perspective side beside it. No armed conflict is without wrongs committed by both sides. It is only through navigating the hurts and the harms that we can hope to reach an (imperfect) peace. Silencing the voice of this child is only propogating the binary attitudes that poison so much debate.

Shaz 2 months ago Bannockburn of all places the site of a shameful surrender
NTS_Scotland stand for humanity. Selective support for causes is a hypocrisy.

Malcolm Thwaite 2 months ago Bannockburn of all places the site of a shameful surrender
@TedThen you should stop falsifying history and for starters read respected Israeli historian, Eli Pappés The Ethnic Cleansing of Palestine. Then give your head a much warranted wobble.

John Byng 2 months ago Bannockburn of all places the site of a shameful surrender
This is a shameful act by the National Trust.