Closing down free expression for Palestine

A Celtic fan was ejected and threatened with arrest at Tynecastle after Celtic officials raised an objection to the tee-shirt he was wearing, which said 'Free Palestine' on the front and 'Boycott Israel' on the back. Threats to free expression by supporters of Palestinian freedom from occupation, colonisation and apartheid have been a constant over the years. As US, UK and EU governments' support for Israeli crimes has remained solid, popular revulsion at Israeli massacres of Palestinians, Turkish aid workers and others has intensfied suspicion and hostility towards the settler-colonial state and made large swathes of popular opinion sympathetic to Palestine. 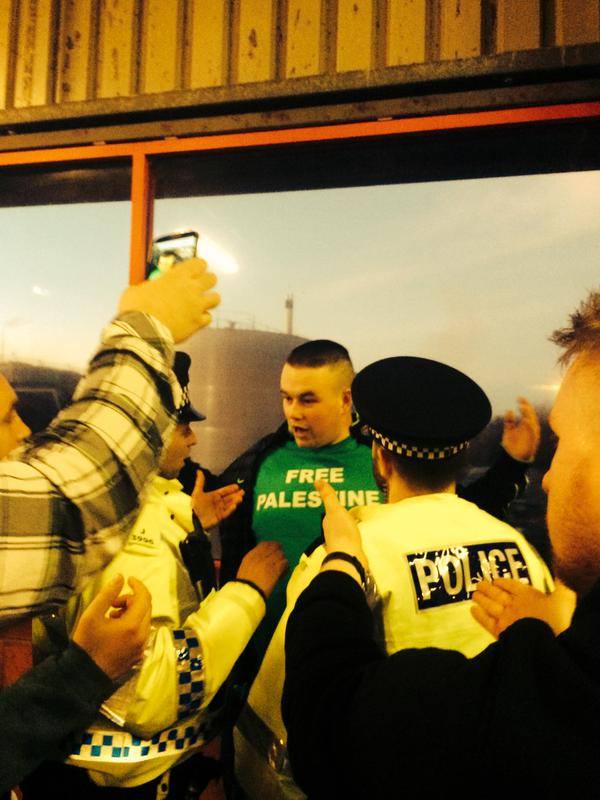 Where will it end? Will teeshirts with a small font and a small image be similarly included in the bans being set up? Palestinian colours on a tee shirt? It's time to take a stand - make this tee shirt ubiquitous. (It also helps to make new friends, start great conversations with complete strangers.)

The aim of the Israeli Government, its Zionist supporters and their political allies in the UK is to close down public discussion of Israel's crimes and the brutal treatment meted out to the long-suffering Palestinian people. The principal target of these efforts has been the many people answering the Palestinian call for boucott, divestment and sanctions against the State of Israel to force it to conform to international law and recognise Palestinian rights.

One example of this effort is UEFA's work to close down displays of support for Palestine at football games and, to this end, the impossition of fines of tens of tousands of pounds against Scottish and Irish clubs whose supporters fly Palestinian flags in solidarity with the injured people of Gaza and the rest of Palestine. UEFA's wrath seems not to be incurred by supporters of Israeli crimes flying an Israeli flag.

For miliions around the world the Palestinian flag is a symbol of heroism and determination by a violated people to regain that which has been violently taken from them, but UEFA's Control, Ethics and Disciplinary Committee has deemed this flag to be "a political symbol" and have ruled that showing it at football games is an infringement of the Association's regulations.

UEFA's Disciplinary Regulations state that "All associations and clubs...may be subject to disciplinary measures and directives [for]...any message that is not fit for a sports event, particularly...of a political, ideological, religious or provocative nature..."

It seems, however, that the "butcher's apron" is not considered provocative by UEFA when it is regularly displayed by Ajax Amsterdam fans.

It's not just in football of course. Courtrooms in England have been used (generally unsuccessfully) by Zionist organisations in their effort to smear and punish institutions that support the Palestinian cause. An Edinburgh Procurator Fiscal tried to convict some SPSC members of racism by arguing in open court that uttering the words "End the siege of Gaza" or "Genocide in Gaza" as in itself a racist act. That perticular effort was unsuccessful but a trial that is in many ways a re-run of the earlier one will take place in Glasgow Sheriff Court on May 7th.

So, from football associations to courtrooms and beyond there is a campaign to erode our rights to free speech and free expression of political ideas when it comes to Palestine. Take a stand - buy and wear the 'provocative' tee shirt that says "Free Palestine"; support the Palestinian call for boycott, divestment and sanctions that appears on the back, Boycott & Isolate Israel".

On the subject of tee shirts, here are examples of the sort that are very popular with Israeli army snipers. The Givati Brigade's Shaked Battalion has a pregnant Palestinian woman in the cross hairs with the joke in Hebrew and English "One shot, two kills". Another has a small boy with a toy gun in cross hairs with the text "The smaller they are, the harder it is". This is no sick 'joke' but deadly serious. Pulitzer Prize winning US journalist Chris Hedges reported from Rafah for Harper's Magazine that in Gaza that he had witnessed Israeli "soldiers entice children like mice into a trap and murder them for sport."

Buy and wear the tee shirt being banned by Celtic and UEFA: click here