A report published today by the all-party Home Affairs Select Committee unanimously recommends limits on political free speech. The six Tory MPs, three New Labour and one SNP are unanimous in urging that the term ‘Zionist’ be allowed only in an academically neutral or positive tone and that use of the term in an “accusatory“ manner should be categorised as “inflammatory” by all political parties and lead to criminal charges.

Equally sinister is the recommendation that criminal penalties be supplemented by worklace sanctions for those who speak the truth that the State of Israel has always been  and remains “a racist endeavour”. Simlar penalties are urged for those who compare Israeli behaviour in any way with that of the Nazis.

SNP Deputy Leader Angus Robertson told the enquiry that dialogue on Palestine in the SNP must take place only “within the context of supporting a two-state solution, and inherent in that is an acknowledgement of the right of self-determination for the Jewish people and the right of the State of Israel to exist”.

1. A past Honorary President of Scottish Palestine Solidarity Campaign, Marion Woolfson, was once called "the most dangerous anti-Zionist in Britain". We cherish her memory and her courageous work for Palestinian freedom.

2. SPSC positions itself as a consistently antiracist organisation that critiques European Jewish Zionism since its birth in 19th century Europe and the earlier Christian Zionism in the UK on account of Zionism’s acceptance of the anti-Semitic goal of ridding Europe of its Jewish citizens, and the Zionist explicit programme to colonise Palestine and dispossess the native Palestinian people.

The report continues along the well-trodden path of conflating hostility to Israeli crimes with antisemitism, a strategy of the Israeli Embassy that conveniently changes the subject from ethnic cleansing in Palestine, incitement by officials in the highest levels of the Israeli government to genocide, and even rape.

The proposal for a ban on the angry use of the term ‘Zionist’ would make much of pro-Palestinian activity difficult going on impossible. To speak of a Zionist like Tony Blair or Gordon Brown or Netanyahu generates profound anger in millions who quite rightly see the war crimes and crimes against humanity carried out by the State of Israel, a state created by organised Jewish militias carrying out massive ethnic cleansing, and are enraged. According to the report, the term Zionism “has been tarnished by its repeated

use in antisemitic and aggressive contexts”, rather than by the record of atrocities by the Zionist movement and its state, Israel.

If these recommendations were to be accepted and enforced, we could face a wave of McCarthyite witch hunts in workplaces and criminal courts greater than anything we have seen before. These dramatic proposals are in line with Israeli Government strategy to defeat the BDS campaign that threatens Israel’s ability to complete the ethnic cleansing of Palestine in the face of Apartheid Israel’s pariah status in world, UK and Scottish public opinion.

A strand of anti-racist democratic politics would be criminalised, for example calling for the apartheid structures of the Israeli State and society (e.g. Jewish-only roads, the ban on family reunions for Palestinian citizens) to be dismantled, campaigning for Israel to become a state for all its citizens, inclu 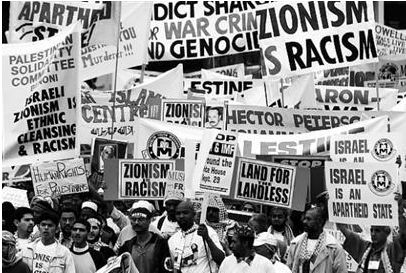 ding the million plus Palestinian citizens of the Apartheid State, rather than privileging the rights of Jews internationally over its non-Jewish citizens. Angus Robertson insisting all SNP discourse on Palestine take place on the basis of acknowledging “the right of self-determination for the Jewish people and the right of the State of Israel to exist” is a profoundly antidemocratic muzzling of all who want to relace the apartheid structures of the State of Israel with a state for all its citizens and is in opposition to the Palestinian struggle for equal rights. It privileges state formations over democratic rights for all.

The SNP Deputy Leader endorsed, and HASC adopted, the key elements of the discredited EUMC definition of anti-semitism. Although never formally accepted by any representative body, the UK College of Policing has adopted it as guidelines. UK Government Minister Eric Pickles endorsed the definition in March of this year which would criminalise anyone identifying the State of Israel as “a racist endeavour” or comparisons of the activities of the Israeli State in any way with that of the Nazis

Angus Robertson MP claimed that anti-Zionism is a gateway to Antisemitism rather than an antidote to it. According to the Committee “some people move from referring to ‘the Government of Israel’ to talking about ‘Israel’; then to ‘Zionists’, and then ‘some people start talking about Jews’; adding that “at some point along that line it morphs into antisemitism”. This ignores the never-ending efforts of organised political Zionists to conflate opposition to the programme of ethnic cleansing in Palestine with hatred of Jewish people - as if opposition to Apartheid, a system of White supremacy, was really hatred of white people!

This report backed by Tory, SNP and New Labour will criminalise large areas of free speech on Israel/Palestine. At a time when the Palestinian people face ethnic cleansing and genocide in Gaza, the members of this Committee have betrayed the Palestinians and joined an attack orchestrated by the Israeli Embassy to smother rising anger at Israel’s crimes.

* "Prior to World War II the majority of Jews were non-Zionist, and a large number were openly hostile to Zionism. ...It was not until the full horror of the Holocaust was realized that the great bulk of the Jewish community came to support Zionism."  Corrigan, EC, Jewish Criticism of Zionism, Middle East Policy Council, Journal, Winter 1990-91, Number 35.