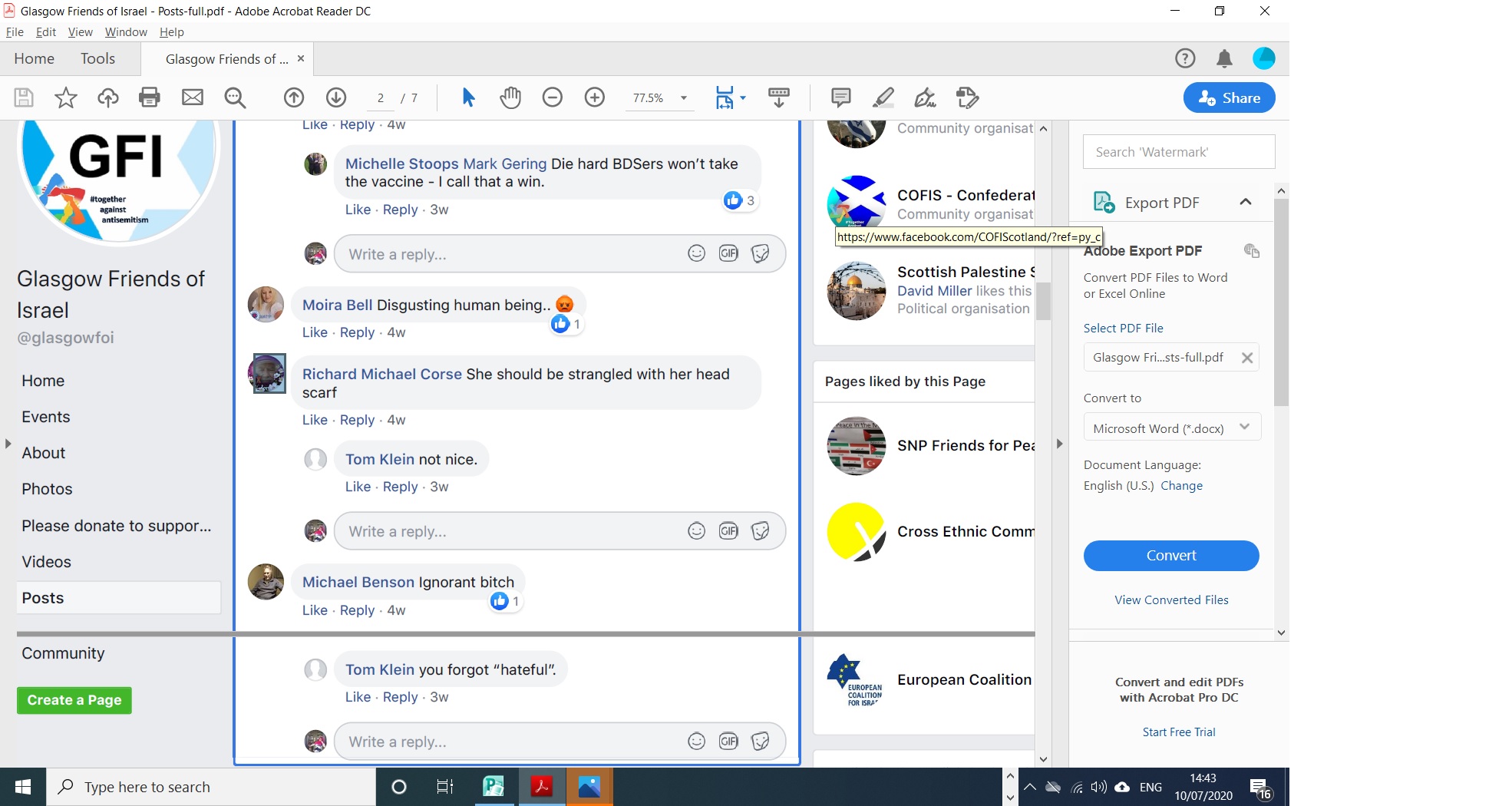 The BBCreports today that the Independent Office for Police Conduct (IOPC) in England and Wales will investigate racism in the police, including "whether the police are treating allegations of hate crime seriously." There is mounting evidence that Police Scotland refuse to treat hate crime reports seriously. The equivalent of the IOPC north of the border, the Scottish Police Investigations & Review Commissioner (PIRC) needs to investigate the record of Police Scotland in this area.

Examples of failures to investigate public manifestations of obvious hate crime include extreme cases of anti-Palestinian racism and Islamophobia. Hopefully, a Scottish investigation can launch without us needing to be outraged by a public scandal in Scotland similar to the Met last Saturday forcing high-profile black athletes from their car and handcuffing them for driving while black.

On Monday, two police officers knocked on the door to discuss a hate crime report concerning the latest atrocity on the Facebook page of Glasgow Friends of Israel (see top); member Richard Michael Corse joined in a hate-filled discussion about a Muslim lawyer whom the group wanted to get fired from her job. He posted that "She should be strangled with her head scarf" for her political activity - opposition to Israeli crimes against humanity, crimes that were once condemned by the Scottish Government as "deep inhumanity".

Police Scotland informed me that they have decided not to contact Richard Michael Corse because "We don't have his phone number and we don't use Facebook". Police Scotland do not consider that a public discussion recommending that the Muslim lawyer be strangled with her head scarf, a hijab, a religious item for many Muslim women, constitutes a hate crime.

Corse' posts are not an isolated example; he would have felt confident to post as he did on this chronically racist Facebook page. Admins post material such as a "Times of Israel article sent to us by a GFI member who is visiting Israel just now, along with the following message" which reported an armed clash resulting in "the murder of three Jews in Halamish and the euthanising of three rioters in Jerusalem," clearly Palestinians. 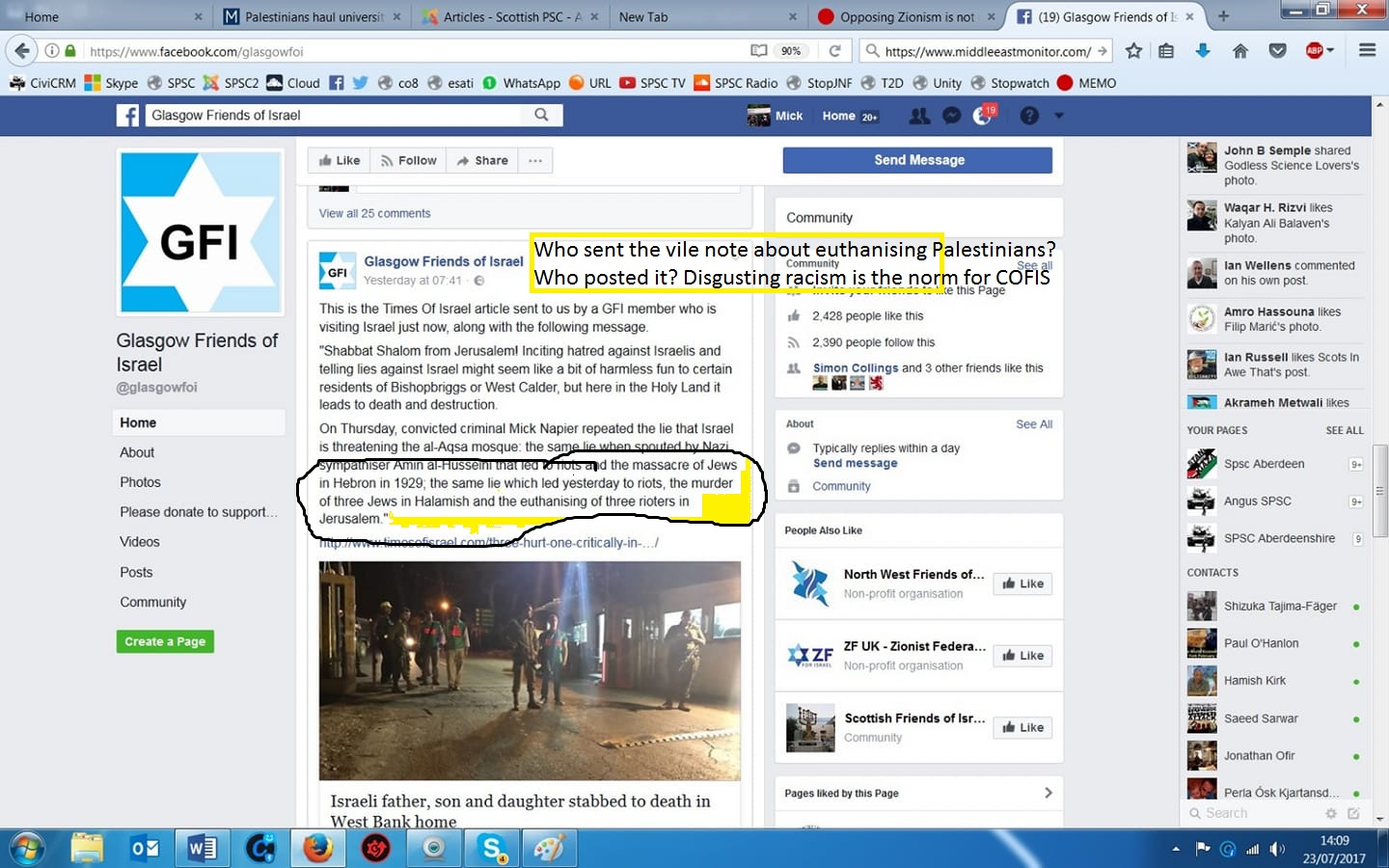 The Nazi-type post was casually 'liked' 25 times by the Facebook page users, including a 'like' by an admin of the page itself. NE Scotland Friends of Israel shared it without comment. The racist malignancy is Scotland-wide.

Hate crimes are a staple of the Glasgow Friends of Israel Facebook page, which was set up after all to support Israel's ethnic cleansing of native Palestinians. The Facebook page hosted a discussion in March last year in the immediate aftermath of the White supremacist massacre of Muslim worshippers in the Christchurch mosque. A group of members jeered at the victims (Diana Meyers),condemned the coverage given to the atrocity (John Sanderson) and warned against excessive sympathy for those murdered, "the hook of emotion in the water for you to bite onto when Muslims suffer" (Richard Treadaway). 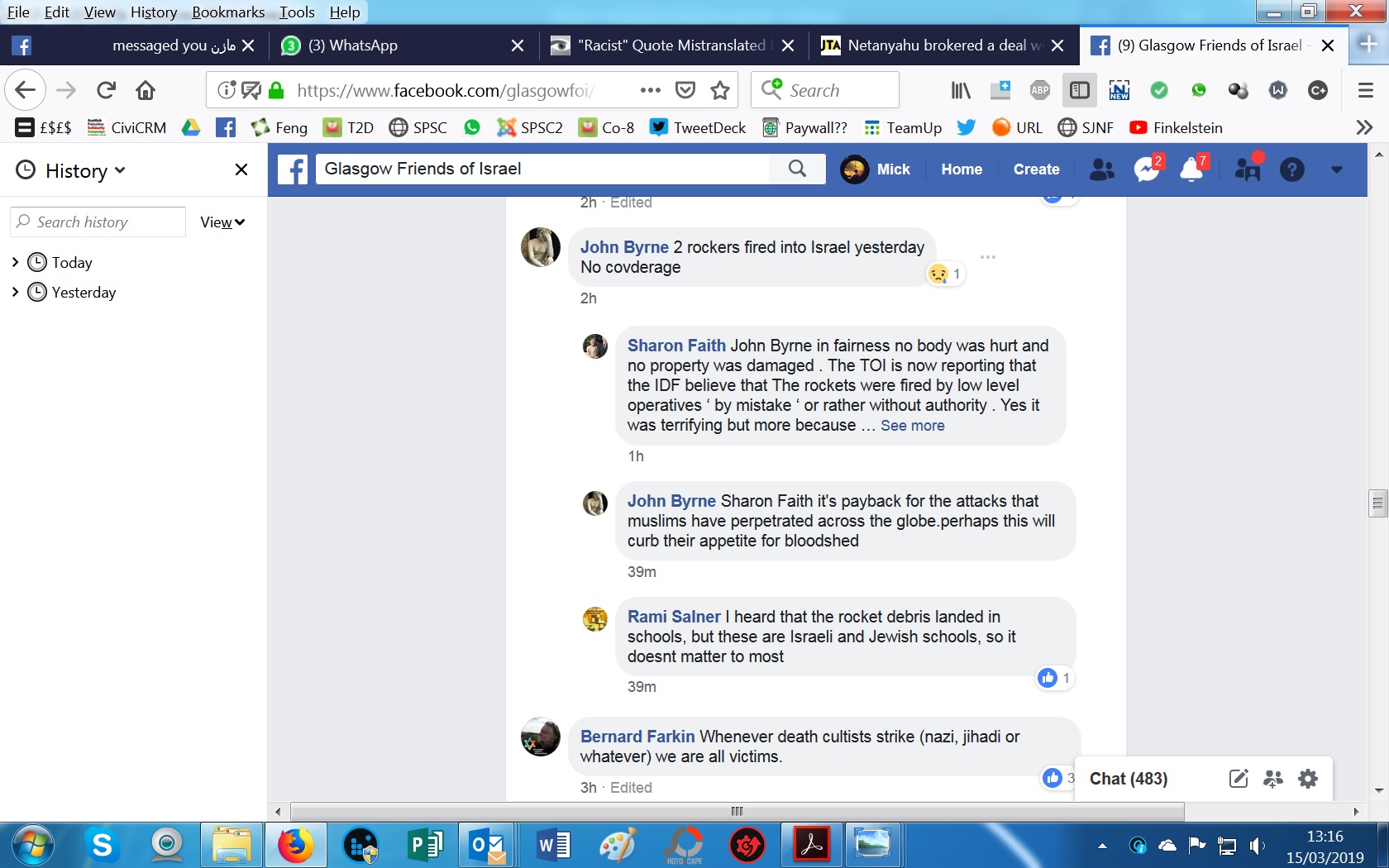 To ensure no-one was in any doubt as to the group's feelings, regular poster John Byrne welcomed the massacre as justified, as "payback" for crimes committed by Muslims elsewhere. These hateful posts went unchallenged and were 'liked' by other members. He emphasised his callousness towards the victims of the mass killing with a brief "And the problem is?" The clear message was that such an atrocity should be repeated.

The three examples above are merely specimen cases, strongly suggesting that Police Scotland have not been treating hate crimes seriously.

Finally, a case where some homicidally inclined pro-Israel elements enjoyed a very light touch on their collar from Police Scotland. Israeli flag-waving Craig Thomson in August 2016 urged his friend Chris Brown to arrange for another friend to kill a large number of people who were demonstrating against Israeli crimes at Tollcross, Edinburgh: “Chris tell Dave to take the Renault straight into the c**ts”. 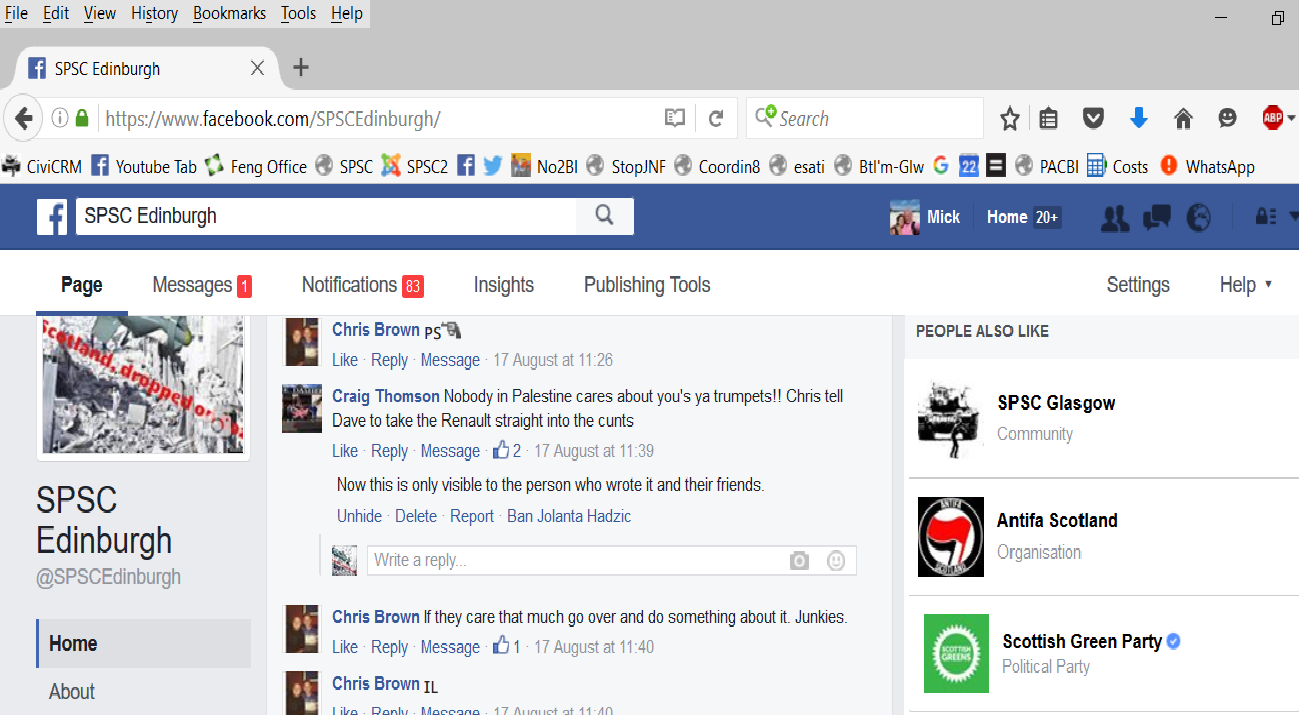 After the August incident, Police Scotland ignored a report of this hate crime and repeated follow up phone calls.

Following a series of ISIS car-ramming political murders in France, Craig Thomson was finally hauled in for questioning. He admitted the posts were published from his own Facebook account, but unconvincingly denied he had posted them. He was let go without charge. The other poster, Chris Brown, was not questioned as to who he thought might be falsely posing as his friend Craig, nor was Dave the Renault owner approached to explain why someone would ask him to commit a murder.

A few months after Craig Brown left a Lothians police station without being charged, another pro-Israel fanatic prepared to act on warnings he had made earlier and was seconds away from ramming his vehicle into a large pro-Palestine demonstration in London. Darren Osborne called off that attack at the very last moment because of the numbers of police present but he rammed his car into Muslims later that day outside Finsbury Park Mosque, killing one.

Pro-Israel elements in Scotland have been publishing material inciting hatred towards Palestinians and Muslims for a very long time. They are growing in confidence following witch-hunts of life-long anti-racists in the Labour Party on baseless accusations of "anti-semitism". The witch-hunters' confidence has grown as many of those targetted have confessed to manifestly baseless accusations in a manner reminiscent of Stalinist Russia or McCarthyite USA.

All this without Police Scotland even recognising that a hate crime has taken pace.

But  Police Scotland (and all of us) would easily identify a hideous hate crime if someone called for Jews to be strangled with their tefillin, a religious identifier. Someone who declared that Jews had deserved their fate, had deserved to be targetted and killed in Paris by ISIS supporters and in Pittsburgh by White supremacists, would be investigated by Police Scotland without delay. A public scandal, arrests and charges would and should follow. No-one would dare to publish approvingly in Scotland of Jews or Afro-Americans being euthanised/lynched by White supremacists?

Continue the mind experiment; is it not likely that considerable police resources would be allocated to gather evidence to secure a conviction of a Craig Brown doppleganger if he switched targets for his hatred, waved a Palestinian flag and discussed a car-ramming attack with friends against a people on a pro-Israel demonstration?

We know that when Israel and Tory Britain are allied and the UK sells sniper rifle parts to the Israeli army, the police and courts are not neutral. But the impunity of the hate crime perpetrators at Glasgow Friends of Israel is reaching monstrous levels and this confidence is facilitated by the mainstream media and political parties adopting the bogus IHRA definition of anti-semitism, and the witch hunting of anti-racists by state prosecutors in Scotland. A key factor has been the cowardice of those who ought to stand against the apartheid state of Israel but are afraid to do so, lest the combined forces that destroyed Corbyn will target them in turn.

Anti-Palestinian racism and Islamophobia are hate crimes that can be promoted publicly in Scotland.

Mick Napier
West Calder
10 July 2020
This email address is being protected from spambots. You need JavaScript enabled to view it.