Fresh legal threats against SPSC from 'Friends of Israel' activist

On July 20th Scottish Palestine Solidarity Campaign and Mick Napier as an individual received virtually identical letters from defamation lawyers who had been instructed by a member of Glasgow Friends of Israel, Matthew Berlow, to demand an apology and financial compensation for an article written and posted on the SPSC website a few days earlier. The letter also demanded payment for the litigant’s legal costs, probably a vast sum and aiming to bankrupt the Campaign and Mick Napier personally.

The issue is alleged “defamatory statements” made in the article. Judge for yourself after reading the offending piece, Scottish court yet again dismisses racism charges against Palestine solidarity activists. The letter set a deadline of 5pm on Tuesday 25 July 2017, after which it threatened “further action, including the raising of court proceedings”.

This move is another attempt by Scottish Zionists to intimidate those of us who campaign against Israel’s crimes against the Palestinian people - crimes which those same pro-Israel elements campaign in support of.

His allies failed abysmally to use criminal law to smear Palestine solidarity campaigners as ‘racist’ for opposing Israeli state-enforced racism and the complicity of corporations, and are still spreading dishonest versions of criminal trial verdicts that disappointed them. Matthew Berlow, backed by the Israeli Embassy no doubt, is now using civil law to try to silence voices they disapprove of.

This sinister effort has a long and unproductive record in the UK; in England one of several attempts by organised Zionists, including John Mann MP, was slammed by a panel of judges as “an impermissible attempt to achieve a political end by litigious means” and a case which showed a “worrying disregard for pluralism, tolerance and freedom of expression”.

In Scotland, huge sums of money and altogether over five years of years of court attendances yielded at the end a fine of £250 and a community payback order for 90 hours of unpaid voluntary work. SPSC has repelled two attempts to use the courts to smear activists as ‘racist’, plus another effort by the pro-Israel Community Security Trust to dishonestly secure a conviction for assault.

But they keep coming back. The earlier defeats have pushed the pro-Israel gang to switch to civil law, where they can deploy unlimited funding to try to silence pro-Palestinian voices. With your help, they will not succeed.

We have replied to the threatening letter (available in full here), rejecting the accusations and noting that the article in question merely notes Matthew Berlow’s published support for Israeli massacres of Palestinians. The statement deemed defamatory, is

Matthew Berlow…believes the road to peace runs through mass killings of thousands of Palestinian men, women and children…[and] endorsing Israel’s war crimes and crimes against humanity, Palestinian humanity, the burning alive of defenceless human beings in the Gaza concentration zone.

Matthew Berlow wrote a short piece in the Scottish Sunday Mail during the Israeli massacre of 1,400 Palestinian men, women and children during Operation Cast Lead, which led with “He [MB] says Israel was right to attack”.  Human Rights Watch concluded that during the Israeli attack on Gaza the Israeli military's firing of white phosphorus shells over densely populated areas during the Gaza offensive "was indiscriminate and is evidence of war crimes". 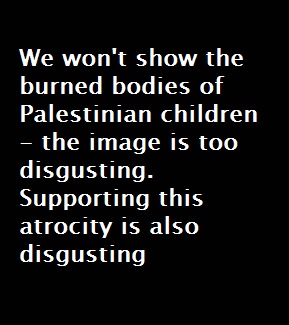 We concluded, as would any honest observer, that firing white phosphorous shells indiscriminately over densely populated areas of the most densely populated place on earth, the Gaza concentration zone, burns people alive. We don’t need such deductive powers, however, for we have the sad and intimate testimonies of survivors who have already told their stories, and will tell them again in a Scottish court if need be.

The SPSC response to the threatening letter continues on the issue of Matthew Berlow’s membership of a group defending Israeli state-enforced racism, Glasgow Friends of Israel:

"As an example of the profound depravity of the group to which Mr Berlow gives his allegiance, their Facebook approvingly carried until this morning a post by an un-named member who characterises violence in Jerusalem on Friday 21 July as “the murder of three Jews in Halamish and the euthanising of three rioters in Jerusalem." Such de-humanising, racist filth is not even seen as noteworthy by Mr Berlow and his group, Glasgow Friends of Israel, or the other Friends of Israel in NE Scotland group who shared the post without comment.

And noted the politics of Scottish Palestine Solidarity Campaign:

"Scottish Palestine Solidarity Campaign’s every written and spoken word shows a group committed to human rights for all and the dismantling of Israel’s apartheid structures to achieve that goal; Matthew Berlow defends Israeli apartheid and incremental genocide in Gaza."

And ends with defiance and a promise to stand firm for Palestinian freedom:

"We defend the statements made in the article; Mr Berlow and his friends’ campaign to silence supporters of Palestinian freedom, critics of Israel, will not be successful. For years we have been frustrated by the torrent of innuendo and downright lies that flow from the racist Friends of Israel groups to which Mr Berlow adheres, as well as other pro-Israel groups and media. Our efforts to secure justice through official bodies, such as Police Scotland and IPSO (Independent Press Standards Organisation) have been unsuccessful.

Your letter threatening legal action already provides us with an opportunity to defend the case for Palestinian freedom. God knows, living as Palestinians do, under a brutal occupation, periodic massacres of which Matthew Berlow approves, not to mention a barrage of media distortion, they need every steadfast supporter they can find."

The campaign to silence pro-Palestinian voices is international and we in Scotland have to join in defying this sinister effort. Members of Glasgow Friends of Israel at one point discussed a proposal to drive Mick Napier out of his home; only one individual but the aim of the anti BDS campaign is to intimidate many. Since the Israeli authorities make Palestinian families homeless as part of their racist programme of ethnic cleansing, we’re not surprised when their supporters here in Scotland are drawn to a similar tactic.

We appeal for your help to achieve two goals:

1.     to repel the attacks on our right to speak the truth about Palestine and Israel, we need your financial support. However modest, a donation – or even better a monthly standing order to the campaign – will help us fight back against an enemy with deep pockets

2.     to take forward the BDS campaign in support of Palestinian freedom. The trials and the latest legal attack are an attack on the Palestinian BDS Call and are due to the successes of the international BDS movement. Our current priority is to build up enough pressure across Scotland to get Local Authorities to divest from arms companies that supply Israel with the means to massacre Palestinians and companies that assist in Israel’s violation of Palestinian rights.