Both Nicola Sturgeon and Kezia Dugdale have urged support for an event organised by the Israeli embassy and its murderous agents in Scotland. The Shalom Festival will showcase Israel as a fine place where Palestinians are not periodically massacred, Jewish-only roads are not barred to Palestinians, and there are no separate legal systems for Israelis and Palestinians in operation side by side, with normal court procedures for Jews and a 99.7% conviction rate for Palestinians.

No mention will be made at the Shalom Festival of the recent appointment to the post of Chief Military Rabbi of one Eyal Kareem, a rabbi who endorsed the rape by Israeli soldiers of 'comely Gentile women' if it boosts Israeli soldiers morale.

Glasgow Friends of Israel is one of the sponsors of the Shalom Festival; these advocates of peace are supporters of every Israeli massacre and crime against the Palestinian people. Only a deluded fool or a supporter of mass murder would be taken in by this group's claim to support peace. 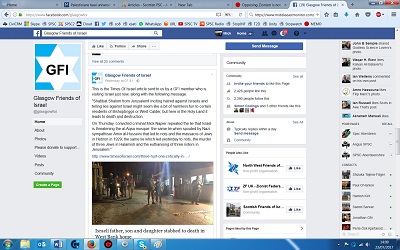 Occasionally they manage to reach new depths of depravity; a post (of Saturday 22 July) on their Facebook page uses Nazi-type language about the killing of Palestinians. The item "by a GFI member who is visiting Israel" contains the usual smears about Palestine supporters being like Nazis but it also reveals the depraved mind-set not just of the sender, and not just of those who liked the post, but with the group's admins who authorised it and have allowed it to stand. The post by the un-named member of Glasgow Friends of Israel opened with a 'Shalom' (Peace):

"Shabbat Shalom from Jerusalem!...On Thursday, convicted criminal Mick Napier repeated the lie* that Israel is threatening  the al-Aqsa mosque: the same lie when spouted by Nazi sympathiser Amin al-Husseini that led to riots and the massacre of Jews in Hebron in 1929; the same lie which led yesterday to riots, the murder of three Jews in Halamish and the euthanising of three rioters in Jerusalem."

Euthanasia is the intentional killing of a human being for his or her alleged benefit. The key word here is "intentional". If death is not intended, it is not an act of euthanasia. The mindset of the person who posted from Israel of "euthanising Palestinians" is very close to the Nazi view that those they killed in their first wave of killings - disabled Germans of all religions or none - were being deprived of "lives not worth living".

The Nazi-type post has already been casually 'liked' 25 times by pro-Israel Facebook users, including a like by an admin of the page itself. It has been shared without comment by NE Scotland Friends of Israel - the malignancy is not restricted to Glasgow.

Our First Minister and the Leader of the Scottish Labout Party need to withdraw their endorsement of the Shalom Festival - they are supporting something that is very dark indeed. They should look at the above evidence from Scottish supporters of Israeli genocide that chimes with the warning by Israeli General Yair Golan that Israel today is very reminiscent of Germany in the 1930s.

*lie? “The big picture is that Israel is weakening the Muslim and Palestinian presence there so that Israeli Jews can believe they are the true owners of the site,” said Yonathan Mizrachi, head of Emek Shaveh, an organisation of Israeli archaeologists opposed to the use of archaeology for political ends.