Palestinians are Sounding the Alarm about Bulldozing the Entire Village of Khan Al-Ahmar, Occupied East Jerusalem 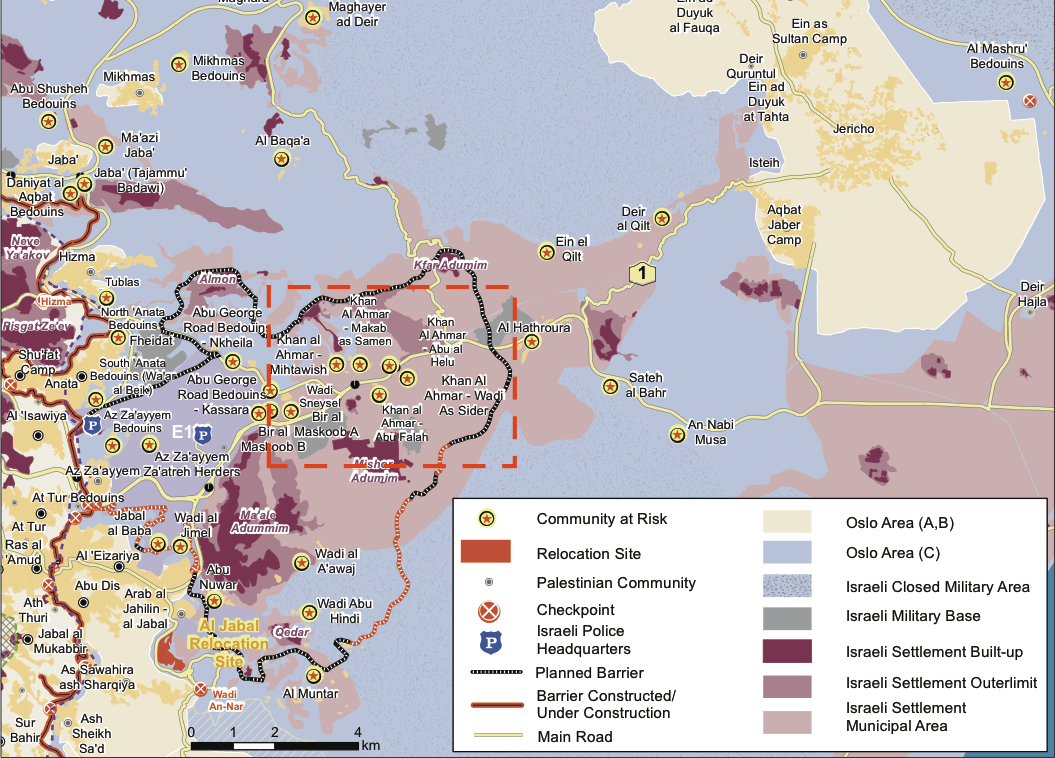 By rejecting the filed appeals of the Khan Al-Ahmar people to stop the demolition of their houses on Wednesday 5th of September, 2018, the Israeli Supreme Court proves its complicit role to the political decision taken by the Israeli State to annex E1 (East Jerusalem) area, an area claimed by Israel to fall within the boundaries of the adjacent illegal settlement of Ma’ale Adumim. This is a clear message that the entire Israeli system is established to foster settler colonialism and ethnically cleanse Palestinians from their land.

Prior to this, last July, Israeli bulldozers invaded Khan Al-Ahmar to demolish the homes of the Bedouin community living there in addition to a mosque, a medical clinic, and a school (built from tires and mud) providing services for 180 children from Khan Al-Ahmar and the neighboring Bedouin communities forced to leave their homes. In response, the residents supported by international and local activists protested non-violently and tried to block the bulldozers from getting through. The Israeli occupation forces severely attacked the residents and the protesters and arrested several people. Sarah Abu Dahuk, 19 years old, was one of the arrested people of Khan Al-Ahmar who was taken to a military prison after being beaten and humiliated by removing her headscarf just because she tried to stop the the Israeli bulldozers. The Israeli Supreme Court temporarily blocked the demolition of the village after the aforementioned appeals were filed by the community.

If the transfer of the 35 Palestinian families (181 people) living in Khan Al-Ahmar takes place, this will be the third time that they are forcibly displaced from their land. The first displacement was in the 1950s when they were transferred from the Negev, south of historical Palestine, where they were living long before Israel existed in 1948. The second time was when Israel constructed the illegal settlement of Kfar Adumim in 1979, located to the east of Jerusalem. Israel suggested alternative sites for the expelled residents, including Nuwei’ma (near Jericho adjacent to an illegal Israeli settlement) and Jabal Albaba which did not suit the Bedouin lifestyle.

Under the 1993 Oslo Accords, more than 60% of occupied West Bank, including Khan Al-Ahmar is classified as area “C,” i.e. under Israeli Civil and Security control. Israel deliberately refuses to issue construction permits to the residents in area “C” to make any constructions illegal and subject to demolition as in the case of Khan Al-Ahmar. Adding to this, the Khan Al-Ahmar community lives in unbearable conditions as Israel denies their rights to be connected to power and water grids in an attempt to force them to leave. In fact, the demolition of Khan Al-Ahmar, a strategic location 5 kilometers east of Jerusalem, connecting the north of the West Bank to its south, will leave more room for the expansion of the two surrounding illegal settlements, Kfar Adumim and Ma’ale Adumim. Also, it will cut off Jerusalem from the rest of the West Bank.

With the expulsion of the residents of Khan Al-Ahmar, Israel is about to conduct a war crime that will be added to its extensive black list of violations against Palestinians. This is not new to Israel as its foundation in 1948 was based on a systematic ethnic cleansing through massacres and forcible eviction of Palestinians from their land. Eliminating the Bedouin community of Khan Al-Ahmar violates human rights and is considered illegal under the fourth Geneva Convention which prohibits the forcible transfer of people in an occupied territory or moving populations to an occupied territory. An example of the latter is the ongoing moving of Israeli settlers to live in Occupied West Bank in illegal settlements.

EU foreign Policy Chief Federica Mogherini said in a statement that demolishing Khan Al-Ahmar is “illegal under international law, would severely threaten the viability of the two-state solution and undermine prospects for peace.” Jennifer Moorehead, Save the Children’s Country Director in the occupied Palestinian territory, condemned bulldozing the entire village of Khan Al-Ahmar and expressed concerns about the effect of the demolition on children by stating that: “This community has already suffered so much and the impending threat of demolition is having a huge impact on the psychological wellbeing of the children. Every child has the right to learn and feel safe and any threat to this must not be accepted. We continue to call for the highest level of international pressure to be kept up so that this demolition is halted indefinitely.” Also, in a show of solidarity, EU, UN, and 18 European and non-European countries sent their representatives and consuls to Khan Al-Ahmar.

Palestinians have the right to live in peace, dignity and freedom. The Palestinian children in Khan Al-Ahmar and other areas in the West Bank and the Gaza Strip (besieged for more than 10 years) have the right to access proper education instead of living in a nightmare, day and night, terrified that their schools might be demolished at any moment. The Israeli judicial system has failed to serve its purpose and has exposed itself as yet another tool of Israeli colonial power. Scottish Palestine Solidarity Campaign calls on governments, international organisations, NGOs, solidarity groups, trade unions and other concerned parties to take immediate action to thwart Israel’s settler colonial project and stop the demolition of Khan Al-Ahmar before it is too late.

Help save Khan Al-Ahmar. Please add your voice by signing the petition and sharing it with everyone you know:
https://www.change.org/p/alistair-burt-save-khan-al-ahmar-village