Letter to today's The National

Letter to the Editor, The National, 29 February 2020 (HTML links added)

"Another excellent article from David Pratt. (Modi is moving India away from Gandhi's vision)

The UK government may not exhibit the politics of hate to its full extent; but it is seeking to silence those with whom it disagrees. The recently announced government policy to ban BDS (the Boycott, Divestment and Sanctions campaign in support of human rights for Palestinians) is as stark an example as any. 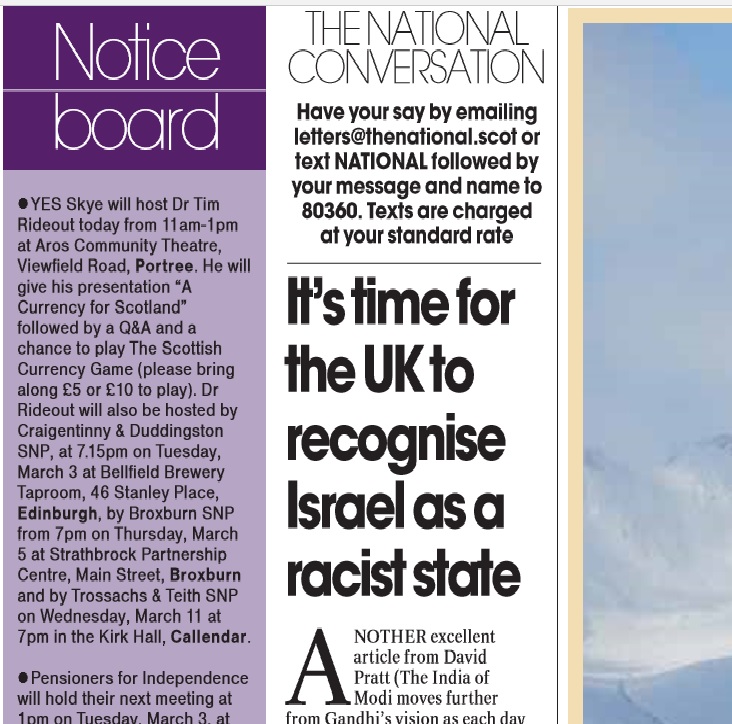 So often during the past 40 years I've heard the cry from Zionists "If only the Palestinians had someone like Ghandi that would promote peaceful resistance"; we could settle our differences and live in peace. Alas this is only one more Zionist lie. They don't want peace. They want Palestine. And they want it without the Palestinians. For 50 years they've had the power to make peace but instead frustrate it at every turn.

In supporting this Israeli Colonialism the UK Government shows nothing but contempt for the basic human rights of the Palestinians. The UK governments for 75+ years have been proclaiming support for a 2 state solution, and still doing so, despite it now being impossible. Greater Israel is the reality; and has been for 50 years. Israel's control of the Golan, West Bank and Gaza will never be relinquished. Israel wants the land - but not the people. Israel is a racist state. Israel is an apartheid regime. Once this is recognised and accepted by the UK government it can become a genuine player in achieving a resolution.

This won't happen by itself. Just as Ghandi's was ignored, ridiculed, despised, attacked, now Omar Barghouti and his BDS campaign face similar experiences as the supporters of Zionism seek to quell all protest including such peaceful initiatives as BDS.

As another great anti-apartheid icon of the 20th Century said: "We know too well that our freedom is incomplete without the freedom of the Palestinians."