"The Church of Scotland is right to criticise Israel because of the 'appalling' way it has treated the Palestinians, according to one of its most senior clerics. 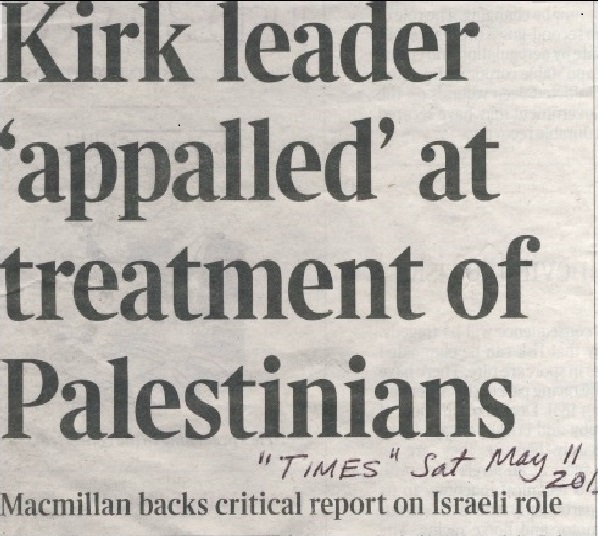 "The Very Reverend Gilleasbuig MacMillan, who is stepping down as minister at St Giles Cathedral in Edinburgh after 40 years in the post, says that he supports a Kirk report on Israel, which is to be debated at the General Assembly next week, though it has had to be substantially redrafted after complaints from the Israeli Embassy.

"'I feel very strongly about the State of Israel,' he said. '[It] was carved out at the end of the Second World War with no provision whatever being made for the Palestinian people who had lived there for 2,000 years...they have been treated in an appalling way, some of these people have been in refugee camps in Jordan since the Six Day War, some of them earlier than that.'
"'...the creation of these new settlements on the West Bank, the taking over of the water supply, the building of that dividing wall, separating people from their own orchards, so they can't pick their own fruit without enormous diversion round gates and security barriers.  It's difficult to know how the world has tolerated that.  United Nations resolutions have spoken against it, yet they continue.'

'American support for the State of Israel is one of the most dangerous things in the world.  A lot of us would think that.'"
The original article in the Times, Saturday May 11th 2013 by Magnus Linklater is available onl;y by subscription

Gilleasbuig, pronounced keel-yas-pick, is a Gaelic name related to Gillespie.  Gilleasbuig MacMillan steps down after 40 years as Minister of St Giles in September.