As of 3pm UK time today, various reports say Israeli snipers have already massacred over 40 Palestinian demonstrators. The language of the BBC is disgusting. No mention of killers killing demonstrators, only such  headlines as "Violence before Jerusalem Embassy Opening". An article entitled "Gaza clashes: 18 dead in violence before US embassy opening" actually lied brazenly with a tale of "At least 18 Palestinians in Gaza have been shot dead by Israeli troops after bloody clashes erupted on the border". So the 'bloody clashes' are supposed to have erupted before the Israeli snipers started killing? But not a single Israeli has been injured in the demonstrations and clashes over the last seven weeks.

As the Israelis throw scores of Palestinian bodies on a pyre to celebrate their endorsement by the deranged Trump, it's time many gave up on the sophisticated lie machine that is the news section of the UK state broadcasting operation known as the BBC. The wretched creatures who work for the news section of the propaganda outfit have no sense of shame and pump out lies and distortions continuously in the service of the UK state.

It is impossible to fully conceal the methodical killing machine of snipers murdering unarmed demonstrators who pose no threat to them from behind strong defences. The BBC does its best, however, to obscure the callous murder of unarmed demonstrators behind weasel phrases like those above.

to come together in solidarity with the Palestinians in Gaza facing a murderous enemy. The UK vendors of sniper rifles to Israel are amongst us and we can reach the killers and their suppliers without having to demonstrate in front of cowardly snipers. The UK government party is financed by arms dealers and it knows perfectly well how its weapons supplied to Israel are going to be used. They don't care.

The Scottish Government has not said a single word about the weekly massacres of Palestinian peaceful demonstrators. It must support the Palestinian call for BDS and refuse to meet the diplomats of this murderous regime in Tel Aviv. 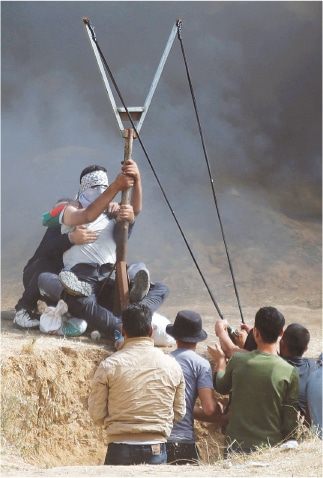 Saturday May 19th assemble 11.30am
Buchanan Steps
to protest Israel's massacres of Palestinians from 1948 till today, always supported by the British Government. Hear Palestinian voices, poetry of resistance, Nakba exhibition, books on Palestine, resources to campaign for  Palestinian freedom.