In a report on Wednesday (15th August 2018), the Israeli army cleared itself of all wrongdoing and said it would not prosecute commanders who massacred 135 Palestinians and shattered large parts of Rafah in an attack on August 1, 2014, in a response to Palestinian resistance fighters capturing an Israeli soldier during a clash in Rafah, Gaza. 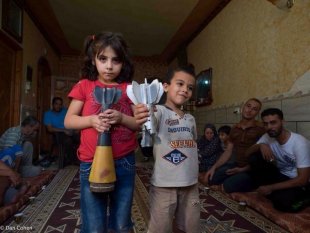 t by Amnesty International, Black Friday: Carnage in Rafah, concluded there was “strong evidence” of war crimes and possible crimes against humanity when Israeli forces bombarded residential areas in Rafah in retaliation for the capture of Israeli soldier Hadar Goldin.

There is overwhelming evidence that Israeli forces committed disproportionate, or otherwise indiscriminate, attacks which killed scores of civilians in their homes, on the streets and in vehicles and injured many more...This includes repeatedly firing artillery and other imprecise explosive weapons in densely populated civilian areas … In some cases, there are indications that they directly fired at and killed civilians, including people fleeing.

one of the deadliest episodes of the war; an intensive use of firepower by Israel, which lasted four days and killed scores of civilians (reports range from at least 135 to over 200), injured many more and destroyed or damaged hundreds of homes and other civilian structures, mostly on 1 August.

The Report notes that Israel issued a 'Hannibal Directive' which "deal[s] with captures of soldiers by unleashing massive firepower on persons, vehicles and buildings in the vicinity" of the capture reardless of human cost and with a readiness to kill the Israeli soldier held captive rather than allow him to be exchanged for Palestinians held hostage in Israeli prisons.

The minute ‘Hannibal Directive’ is declared on the radio, there are consequences. There’s a fire procedure called the ‘Hannibal fire procedure’ – you fire at every suspicious place that merges with a central route. You don’t spare any means.”

It's not clear what the Israeli Army means by suspicious. The infantry officer reported that the initial burst of fire lasted three hours. An artillery soldier said his battery was “firing at a maximum fire rate” right into inhabited areas. According to the report of an Israeli military inquiry, more than 2,000 bombs, missiles and shells were fired in Rafah during 1 August, including 1,000 in the three hours following the capture. Rafah has about the same population as Dover but it is densely packed into a small area.

Three ambulances drove out of Aby Youssef Al Najjar Hospital to collect wounded people near a mosque in Rafah; one ambulance was hit and completely destroyed by what appeared to be three drone-launched missiles, burning to death the three medics and all the wounded within the ambulance. A second ambulance left, while the other, which remained to collect the wounded and dead, was hit by another apparent drone strike.

Amnesty concludes that such massacres are permitted to "Israeli army commanders and officers [who] can operate in confidence that they are unlikely to be held accountable for violations of international law due to the pervasive climate of impunity that has existed for decades".

The Black Friday massacre between August 1 - August 4th in Rafah was part of the 50-day Operation Protective Edge which killed 2,200 Palestinians, overwhelmingly civilians, including 551 children. This massacre is part of the Israeli-imposed siege – aided by neighbouring Egypt – in force since elections in Palestine in 2007 produced results unpalatable to Washington, Brussles and London.

The reports by Amnesty International and other local NGOs including B’tselem led to the launching of a preliminary investigation by the International Criminal Court (ICC). But the ICC was not able to open a full war crimes investigation, as one of its criteria is whether a country is capable of investigating itself and prosecuting its own citizens. The must have concluded against all the evidence over many decadeds of many massacres that Israel is capable of such an investigation.