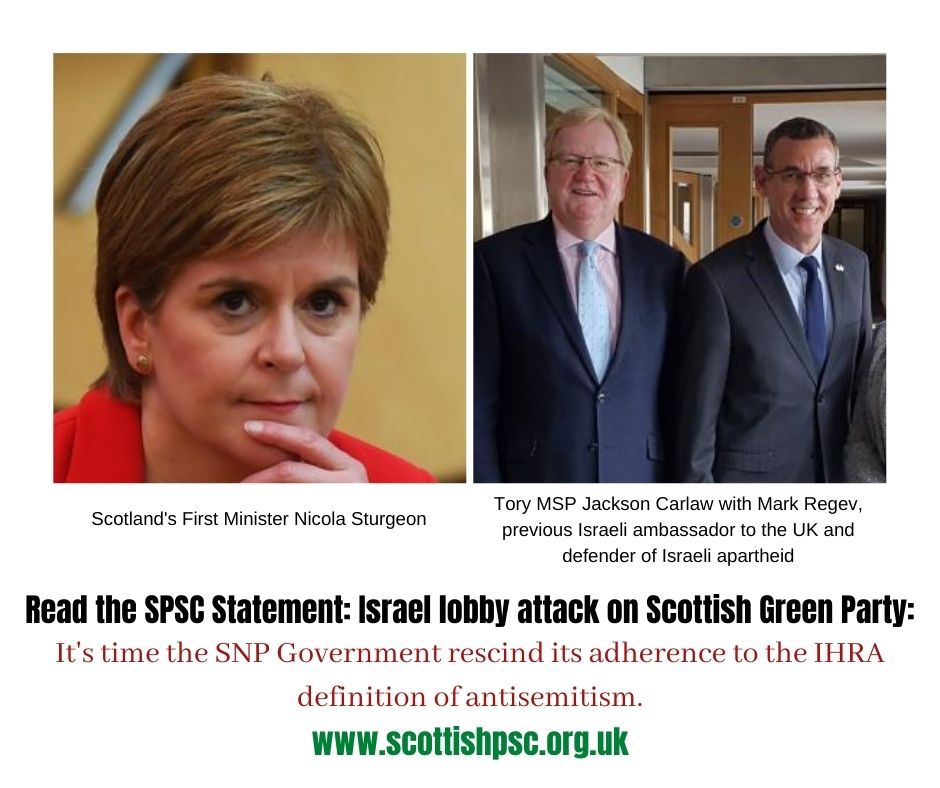 MSP Jackson Carlaw has written to the First Minister making reference to specific clauses of the IHRA definition of antisemitism that he believes debars SGP MSPs from serving in the Scottish Government, in particular that “denying the rights of Jews to self-determination, including claiming the existence of a state of Israel is a racist endeavour”. By highlighting this particular section of the IHRA definition, Mr Carlaw has demonstrated its fallacy as a definition of antisemitism since it refers to a claim about a political entity, not Jews as Jews. Indeed Mr Carlaw’s intervention demonstrates that the purpose of IHRA is precisely to silence criticism of Israel, to prevent critical analysis of Israel as a settler colonial state and to undermine the campaign for Boycott, Divestment and Sanctions against the state of Israel (BDS) whilst it continues to be in breach of international law. This much has been admitted by Gilad Erdan, Permanent Representative of Israel to the United Nations, when he was Israeli Minister for Public Security.

The SNP Government needs to rescind its adherence to the IHRA definition of antisemitism. The definition was authored by the U.S attorney Kenneth Stern, however in written evidence submitted to the US Congress, Stern charged that his original definition had been used for an entirely different purpose to that for which it had been designed i.e to curb freedom of speech.

The racist nature of Israel has been recognised by the UN Committee on the Elimination of Racism and identified by them and Human Rights Watch, B’tselem (the Israeli Information Centre for Human Rights in the Occupied Territories), Al Haq (Palestinian Human Rights organisation) and others as apartheid. The right to campaign against Israel, including to call for a boycott of Israel has been recognised as legitimate campaigning and not antisemitic by Lord Bracadale in his report to the Scottish Government on Hate Speech (page 24-25) as well as by the UK Supreme Court. Only last year the Scottish Government affirmed that they “do not wish to mandate how Scottish public institutions, organisations or individuals approach this issue [of boycott, divestment and sanctions against Israel]”.

The Scottish Government is on record that it “strongly discourages trade and investment from illegal [Israeli] settlements”. In 2015 Nicola Sturgeon personally endorsed the ending of the Scottish Arms Trade with Israel. In her statement to the "Ending the Scottish Arms Trade with Israel" conference she stated “during the recent conflict in Gaza the Scottish Government wrote to the UK Government urging an embargo on arms sales to Israel”. Nicola Sturgeon also sent her “best wishes” to the conference. Jakson Carlaw and other apologists of Israeli racism might point out that the IHRA defines anti-Semitism as “requiring of [Israel] a behavior not expected or demanded of any other democratic nation”. This clearly puts Nicola Sturgeon at odds with the IHRA definition in personally endorsing ending the Scottish arms trade with Israel.

A diverse group of international scholars in antisemitism studies drafted the Jerusalem Declaration on Antisemitism (JDA). The JDA is endorsed by a diverse range of distinguished scholars and heads of institutions in Europe, the United States, Canada and Israel. The JDA group have stated that the IHRA definition “blurs the difference between antisemitic speech and legitimate criticism of Israel and Zionism. This causes confusion, while delegitimizing the voices of Palestinians and others, including Jews, who hold views that are sharply critical of Israel and Zionism. None of this helps combat antisemitism.”

The purpose of IHRA definition has also been condemned by Palestinians, whose right to self-determination has been denied by Israel, its military, Lands Authority and Jewish settlers. A group of 122 Palestinian and Arab academics, journalists and intellectuals expressed their concerns about the IHRA definition in an open letter.

The IHRA definition also poses a threat to academic freedom and free speech in UK universities.

Universities throughout the UK received threatening correspondence last year from Gavin Williamson, the Education Secretary after he said he cut their funding if they refuse to adopt the International Holocaust Remembrance Alliance (IHRA) definition of anti-Semitism.

At Scottish Palestine Solidarity Campaign we recognise that external affairs remain outwith the agreement between the SNP and the SGP. However Jackson Carlaw and others in the media in attempting to exploit the difference of position between the parties on IHRA exposes the fundamental problem with the IHRA definition. Indeed, the ‘definition’ has become a barrier to tackling the real issues of antisemitism and other forms of racism.

The Scottish Greens have often been the only party to publicly criticise Israel’s murderous attacks on Palestinians blockaded in the Gaza strip. The policy has been widely praised by Palestinians living under occupation and apartheid, and Palestinian refugees in Scotland. We would encourage the Scottish Greens to continue to stand up to Zionist attacks and speak out in support of the Palestinian people.

Organisations who lobby on behalf of Israel in Scotland will be rubbing their hands with glee at this situation. They have pressurised the Scottish Government to sign up to a bogus definition of antisemitism that is politically motivated, intellectually incoherent and designed to stop criticism of currently the world’s most brutal apartheid regime – Israel. The Scottish Government in signing up to this have fallen into a trap, we think it is time to consign the IHRA definition to the bin and we call on all political parties and institutions in Scotland to immediately drop the IHRA definition.

UK GOV WORKS TO ISOLATE GAZA UNDER ISRAELI ATTACKOn this day in 2018, UK abstained on a vote at the UN Human Rights Council to send a commission of enquiry to Gaza. The UK attacked the resolution as
...