"There is nothing that Katie Hopkins said that has not been said every day by Israeli politicians.
For those interested there is a fascinating interview in the November 2018 edition of the Israel Today magazine with Katie Hopkins which informs us that she is ‘one of the few willing to speak truth to ills in our societies, irrespective of the consequences of doing so".

Katie Hopkins is a byword for racism and bigotry. What is in the throat of the tabloid leader writers is on the Twitter feed of Katie Hopkins. There is no neo-Nazi insult that is too vile or genocidal for Katie Hopkins. Hence why the Mail took her on from the Sun.

However Hopkins has managed to excel herself with her latest tweet justifying Robert Bowers, the murderer of 11 Jews at Pittsburgh. In his last message Bowers tweeted ‘HIAS likes to bring invaders in that kill our people. I can’t sit by and watch our people get slaughtered. Screw your optics I’m going in.’ HIAS being the Hebrew Immigrant Aid Society.

Hopkins tweeted: ‘Watching the pin-the-blame on the donkey after #PittsburghSynagogue. Gab. Trump. White Supremacists. The Media. Muslims. Look to the Chief Rabbi and his support for mass migration across the Med. There you will find your truths.” #Pittsburg

It’s not clear which Chief Rabbi she is talking about. Britain’s Chief Rabbi, the hapless Ephraim Mirvis, has never supported mass migration, but it is a useful myth. The Chief Rabbi is a metonym for Jews. In other words the Jews are responsible for the refugees which Trump railed against in the recent Congressional election campaign.

The Jewish Chronicle engaged in some synthetic outrage - "Katie Hopkins condemned for blaming Pittsburgh Tree of Life synagogue shooting on Chief Rabbi's support for mass migration - but they carefully refrained from publicising her support for Israel.

It is a favourite theme of the neo-Nazi Right that the ‘problem’ of refugees is the ‘fault’ of the Jews. It would seem that Katie Hopkins, who spends increasing time in the company of the far-Right, has adopted this meme. ' 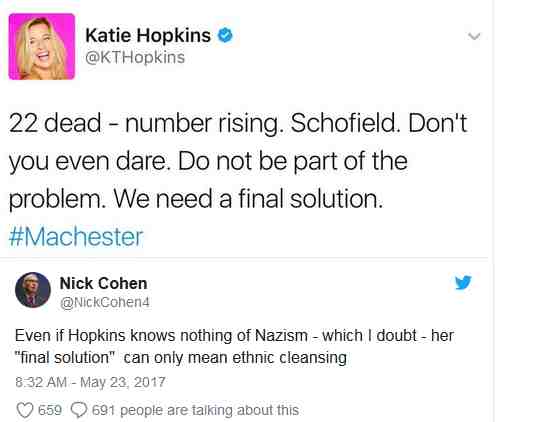 Hopkin’s reaction to the suicide bomb at Ariande Grande’s concert in Manchester, when 22 people were killed, was to call for a ‘Final Solution’ of Muslims, which led to her departure from LBC.

Katie Hopkins is however a consistent bigot. She may be the highest profile racist in Britain today, apart from her good friend Tommy Robinson, but she is also a sincere and dedicated Zionist.

She visited Israel and went out of her way to praise the Israeli military and the settlers and demonise the Palestinians. However none of this prevented her from being an anti-Semite. Quite the contrary to her diaspora Jews must seem pitifully weak.

Let us recall other comments that went virtually unnoticed by the Zionists until she picked on the Jews. As thousands of refugees were drowning in the Mediterranean, as they tried to flee civil war and famine in Africa, Katie Hopkins, took a pride in demonstrating how ‘tough’ she was. One of her most infamous quotes was

“Make no mistake, these migrants are like cockroaches. They might look a bit “Bob Geldof’s Ethiopia circa 1984”, but they are built to survive a nuclear bomb. They are survivors”

UN high commissioner for human rights, Zeid Ra’ad Al Hussein, pointed out that the term “cockroaches” was used by both the Nazis and those behind the genocide in Rwanda. In the Sun she wrote

“No, I don’t care. Show me pictures of coffins, show me bodies floating in water, play violins and show me skinny people looking sad. I still don’t care.’ 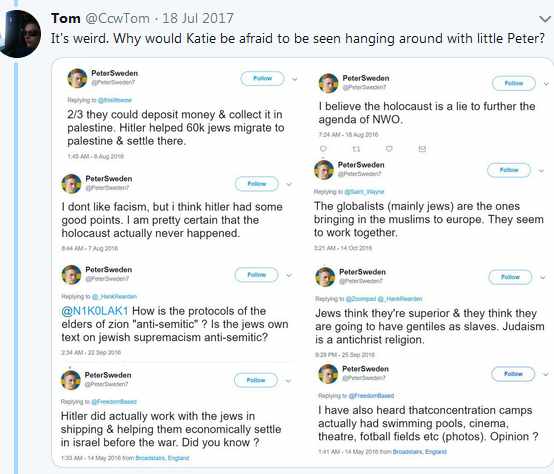 Hopkins joined the C-Star in Sicily, which had been crowd funded by the fascists, whose purpose it was to prevent the rescue of drowning refugees. Ironically the fascist ship broke down and had to be rescued by the German ship Sea Eye which was there to rescue refugees! It was whilst meeting the group Defend Europe in Sicily that she posed for photographs with Peter Sweden, who is a holocaust denier. Sweden tweeted

the globalists (mainly Jews) are the ones bringing in the Muslims to Europe, they seem to work together” and “it is the Vatican and the Jews who are behind the NOW [New World Order]

Marie van der Zyl, the President of the Board of Deputies wrote that

“It is distressing to see Katie Hopkins posing for a photograph with a Holocaust denier, as part of her trip to support the ‘Defend Europe’ campaign,” 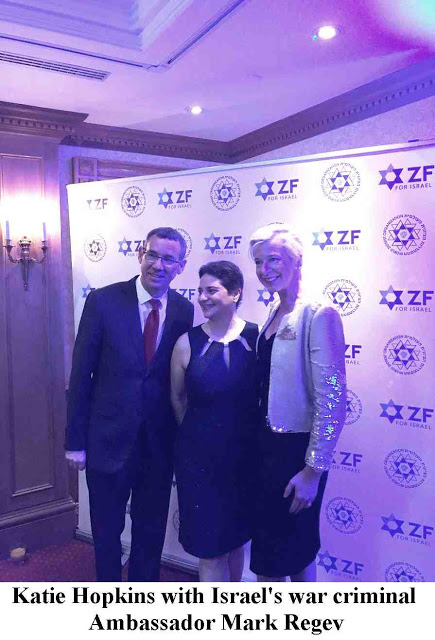 It must be distressing for Zyl, who fully supports the equally bigoted policy of Israeli Ministers when it comes to refugees.

After all it wasn’t all that long ago when Katie Hopkins was an honoured guest at the annual dinner and dance of the Zionist Federation. And who could possibly object to her presence when Israeli Minister Gideon Saar was the guest speaker? Saar even had the chutzpah to claim that Israel didn’t deport asylum seekers. Even as dedicated a Zionist as Rabbi Lea Mühlstein walked out. The Jewish Chronicle claimed that the dinner was ‘marred by the heckling of Gideon Sa’ar'.

Katie seems to have had a wonderful time having her photo taken with fans and of course the chief ghoul himself, Mark Regev.

This provoked Daniel Sugarman, a hack journalist to complain that Katie Hopkin’s presence at the Zionist Federation’s Gala Dinner was akin to a pork chop at a Friday Night Dinner.

Most unfair to pigs. Daniel ran through some of Katie’s more unsavoury comments on “cockroaches”, the need for a “final solution” and her letter “dear black people: if your lives matter, why do you shoot and stab each other so much?”

All of the above is true of course but how is this different from referring to African refugees as a ‘cancer’? This is exactly what Miri Regev, Israel’s Minister of ‘Culture’ (as in Goebbels) did. Admittedly Regev apologised for using the term – that is she apologised to cancer patients for having compared them to refugees. An Opinion Poll conducted by the Israeli Democracy Institute found 52% of Israelis supported her comments, and 33% supported violence against refugees.

The moral of the story is that Katie should emigrate to Israel where she can convert to membership of the Jewish race and can then join the Israeli government. Sugarman found it

‘infuriating but, sadly, not surprising. There are unfortunately some within the wider Zionist movement who appear to believe that any amount of loathsome behaviour is bearable, as long as a perceived support of Israel is there.’

Katie had tweeted about how she had “pencilled him in” (Mark Regev) as her fourth husband. Clearly it would be a match made in hell. But Sugarman is being a hypocrite. There is nothing that Katie said that has not been said every day by Israeli politicians.
For those interested there is a fascinating interview in the November 2018 edition of the Israel Today magazine with Katie Hopkins which informs us that she is ‘one of the few willing to speak truth to ills in our societies, irrespective of the consequences of doing so’.